Forums: News, Suicide, Obituaries, Robin Williams, Life Is Too Short To Not Laugh
Email this Topic • Print this Page
Reply Mon 11 Aug, 2014 04:56 pm
He recently checked himself into rehab again too.

SAN FRANCISCO (KRON) — Officials are investigating the death of actor and comedian Robin Williams.
Williams was 62.
The Marin County Sheriff’s Office said that Williams was found unconscious Monday afternoon at about 12:00 p.m. inside his residence in unincorporated Tiburon.
An investigation into the cause, manner, and circumstances of the death is currently underway by the Investigations and Coroner Divisions of the Sheriff’s Office, officials said.
Investigators said that Williams was last seen alive at his residence, where he resides with his wife, at approximately 10:00 pm on Sunday.
Type: Discussion • Score: 37 • Views: 43,218 • Replies: 503
2
Reply Mon 11 Aug, 2014 04:57 pm
@Butrflynet,
Aw, I loved that man.
0 Replies
1
Reply Mon 11 Aug, 2014 05:00 pm
One account calls it possible suicide.
1 Reply
1
Reply Mon 11 Aug, 2014 05:02 pm
This from twitter 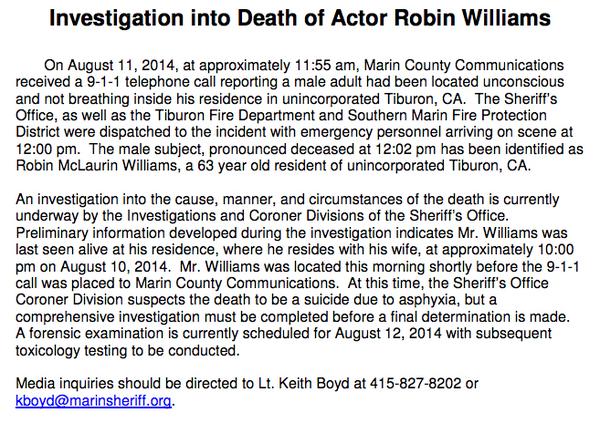 Here's the release from the Marin County Sheriff's Office:

On August 11, 2014, at approximately 11:55 am, Marin County Communications
received a 9-1-1 telephone call reporting a male adult had been located unconscious
and not breathing inside his residence in unincorporated Tiburon, CA. The Sheriff’s
Office, as well as the Tiburon Fire Department and Southern Marin Fire Protection
District were dispatched to the incident with emergency personnel arriving on scene at
12:00 pm. The male subject, pronounced deceased at 12:02 pm has been identified as
Robin McLaurin Williams, a 63 year old resident of unincorporated Tiburon, CA.

An investigation into the cause, manner, and circumstances of the death is currently
underway by the Investigations and Coroner Divisions of the Sheriff’s Office.
Preliminary information developed during the investigation indicates Mr. Williams was
last seen alive at his residence, where he resides with his wife, at approximately 10:00
pm on August 10, 2014. Mr. Williams was located this morning shortly before the 9-1-1
call was placed to Marin County Communications. At this time, the Sheriff’s Office
Coroner Division suspects the death to be a suicide due to asphyxia, but a
comprehensive investigation must be completed before a final determination is made.
A forensic examination is currently scheduled for August 12, 2014 with subsequent
toxicology testing to be conducted.
0 Replies
1
Reply Mon 11 Aug, 2014 05:09 pm
@jespah,
Here's a corroborating article from Entertainment Weekly:

Such an incredibly talented actor and comedian.

When I read that the cause of death was asphyxiation, morbid as this sounds, I think of David Carradine.

I hope it wasn't an accidental suicide in this case.
0 Replies
0
Reply Mon 11 Aug, 2014 06:12 pm
...and the reality is that when a person with that much life inside them decides to voluntarily check out, you know that people are putting too much pressure on other people.

Can you imagine what must have been going on in his life?

"With so much conflict in our world, God must have needed a laugh, (knock knock) Show time Mr. Williams"
0 Replies
2
Reply Mon 11 Aug, 2014 06:17 pm
On one hand, we have CBS cancelling the critically well received The Crazy Ones (2013) after the first season. But on the other hand, Robin Williams did sign on with the highly anticipated long-awaited sequel, Mrs Doubtfire 2.

His career was still going strong despite a few recent Razzie worthy film projects. His death - suicide or not - is still pretty bitter to accept. He had a reputation for being a wonderful person.
2 Replies