What Will Bernie Do?

Forums: Politics, Hillary Clinton, Us Politics, Bernie Sanders, Election 2016
Email this Topic • Print this Page
Reply Thu 19 May, 2016 10:33 pm
I meant to start this thread a few days ago, but better late...
Hey, I'd be very interested to see everyone's prognostications about what Bernie Sanders is going to do now that the nomination is a mathematical impossibility. Well, it has been since mid-March really, but then he was scaling a cliff - now he's trying to walk up vertical glass.
Anyway, I've been saying for months that Bernie isn't the pure-of-heart-and-motives being some seem to think, and lately it seems he's been proving it. He's only reluctantly and half-heartedly denounced the horrible behavior of his followers. He's still vowing to "fight until the end" after some of his own associates are reportedly telling him its time to scale back and focus on beating Trump.

The bitter attitudes of some Bernie die-hards on this forum serve well to illustrate and represent clearly why it's still very much in question what is going to happen. Will Bernie lead a full scale revolt at convention - openly defying the larger good of the party and nominee? Will Bernie turn sharply after the California primary, begin extolling the virtues of Hillary and exhorting his supporters to support her (I just can't envision this - how can you accuse someone of thievery and corruption for months and then credibly act like he supports her?)?

What will Bernie do?
Type: Discussion • Score: 21 • Views: 12,039 • Replies: 252
4
Reply Thu 19 May, 2016 11:02 pm
Jamelle Bouie has been a clear-eyed and fair critic of all sides of this election from the beginning. This article of his in Slate outlines the cost- even to Bernie himself - if Bernie decides being obstinate is the best course.

Bernie. Don’t Do This.

With a scorched-earth campaign against Clinton, Sanders is risking his party’s nominee, its coalition, and his message.

...Sanders is trying to get around these facts by arguing, in effect, that the will of his voters counts for more than the majority. In doing so, he isn’t just fighting till the last vote for a worthy cause—he’s deriding and disregarding the votes of the party’s most loyal backers, voters who are key to any progressive project, now and in the future...

http://www.slate.com/articles/news_and_politics/politics/2016/05/bernie_sanders_scorched_earth_run_against_hillary_clinton_is_a_mistake.html
0 Replies
3
Reply Fri 20 May, 2016 04:57 am
@snood,
I liked his statement the other day about his followers who used threats. He said it was unforgivable "BUT", the "BUT" usually precedes an excuse, and he did not disappoint .
1 Reply
0
Reply Fri 20 May, 2016 06:31 am
I guess we will just have to wait until after California, if he doesn't have a blowout (even with I am not sure it is possible), he really can't continue to say he deserves for the super delegate to turn around and vote for him failing getting the votes to back him up. To tell the truth, I can't see him conceding ever. I hope I am proved wrong, I really do.

I have thought since almost the beginning he had his own agenda, it does include all the things he is calling for, but, I never thought he thought it was a team democrat effort so to speak, but his own and his followers efforts and democrats off the sidelines of our own party. Just my own feelings on the matter.
0 Replies
2
Reply Fri 20 May, 2016 08:21 am
I think Bernie really does believe the Democratic system was rigged against him, (I don't consider closed primaries as rigging, but apparently the Bernie camp does). As long as Bernie is not mathematically eliminated, Bernie has a chance to prove:
A. That a socialist speaking about the money flow to the 1% can come out of nowhere, oppose the party's establishment and still come close

B. That a candidate that depends on small donations can actually compete on an equal level with big corporate money, at least in the primaries. This is a big contribution in and of itself, and the closer Bernie comes to Hillary in the vote count, the stronger the case becomes to abandon corporate money in elections.

After the New Jersey and California primaries, and Bernie comes close in the overall delegate count, I believe he will start telling people it is important for the country not to fall into the hands of the Trump and corporate interests completely, find common ground with Hillary on many things, and campaign for her, (while mentioning he has differences).
2 Replies
3
Reply Fri 20 May, 2016 08:27 am
@Blickers,
I repeat this from my launch: How can you accuse someone of thievery and corruption for months and then credibly act like you support her?
2 Replies
3
Reply Fri 20 May, 2016 08:36 am
@snood,
He's a politician who's gotten himself elected umpteen times-believe me, he'll manage.
1 Reply
2
Reply Fri 20 May, 2016 09:21 am
@Blickers,
He's been reelected by Vermont voters in Vermont - I may be wrong, but they might be just a little less tough than the audience he will have on the national stage - a little less discriminating. Nothing's ever been demanded of him in Vermont but that he keeps espousing the applause-line, left wing platitudes for which they have come to know and love him.
I don't think most people are so shortsighted and stupid that they can be told Hillary is a crook Tuesday and then "Hey, but I support her 100%" Wednesday, without it causing at least a second thought.
0 Replies
4
Reply Fri 20 May, 2016 09:27 am
@Blickers,
Blickers wrote:

B. That a candidate that depends on small donations can actually compete on an equal level with big corporate money, at least in the primaries. This is a big contribution in and of itself, and the closer Bernie comes to Hillary in the vote count, the stronger the case becomes to abandon corporate money in elections.

This 'big corporate money' thing has been bothering me for a while.

I work for a fortune 500 bank. I'm in technical project management. I support Hillary Clinton. I make enough money that I plan on donating ~$500 hundred dollars to her general election fund over the next few months. I'm one of 18,000 employees that work here. When I donate money, I'm asked to enter my employer. My donation gets tracked as part of 'Wall Street' money.

There is not a single policy or business decision that Hillary will make that will impact me directly. My support of her has nothing to do with my employer or any financial benefit that I could possibly receive. In fact, I fully expect that my taxes will increase and monetarily I will not benefit from a Clinton presidency.

Why is my donation (and hundreds/thousands of my coworkers) vilified because of my employer?
0 Replies
2
Reply Fri 20 May, 2016 09:32 am
We had the same discussion in 2008 (with Hillary playing the opposite role).

According to many Obama supporters, it’s all Hillary’s fault. If she hadn’t launched all those vile, negative attacks on their hero — if she had just gone away — his aura would be intact, and his mission of unifying America still on track.

But how negative has the Clinton campaign been, really? Yes, it ran an ad that included Osama bin Laden in a montage of crisis images that also included the Great Depression and Hurricane Katrina. To listen to some pundits, you’d think that ad was practically the same as the famous G.O.P. ad accusing Max Cleland of being weak on national security.

It wasn’t. The attacks from the Clinton campaign have been badminton compared with the hardball Republicans will play this fall. If the relatively mild rough and tumble of the Democratic fight has been enough to knock Mr. Obama off his pedestal, what hope did he ever have of staying on it through the general election?

Krugman was a Hillary supporter in both of these primaries. I really wish Hillary supporters had a better memory of the 2008 campaign.
1 Reply
1
Reply Fri 20 May, 2016 11:02 am
I hope Bernie runs as a 3rd party candidate.
1 Reply
3
Reply Fri 20 May, 2016 11:14 am
@maxdancona,
Obama did not spend the entire election talking about Hillary being bought and paid for, rather he talked about what he was going to do. Hillary was critical of him, big time, but not really the other way around. I would say Obama pedestal was still on him during his inauguration day (both of them) so you may have a point.
2009

Obama did not spend the entire election talking about Hillary being bought and paid for, rather he talked about what he was going to do. Hillary was critical of him, big time, but not really the other way around. I would say Obama pedestal was still on him during his inauguration day (both of them) so you may have a point. 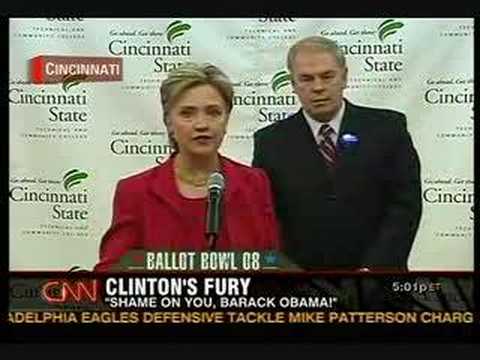 Read the article again... it was Hillary in 2008 who was accused of risking the Democrats chance of winning the White House by continuing her campaign beyond the point it was mathematically feasible for her to win.

If Hillary is as gracious towards Bernie in 2016 as Obama was towards Hillary in 2008, it will go a long way toward unifying the party and winning the White House.

How quickly Hillary supporters have forgotten.
2 Replies
4
Reply Fri 20 May, 2016 12:17 pm
@snood,
It's not all that hard. Jerry Brown and Bill Clinton completely hammered each other in the debates and Brown said he wouldn't serve as Clinton's VP if it came down to it. Brown endorsed Clinton in the end.

Clinton supported Obama in the end and at this point eight years ago and that campaign was a lot uglier than this one. Heck, Bush accused Reagan of "voodoo economics" and then ran as his VP.
1 Reply
1
Reply Fri 20 May, 2016 12:32 pm
@maxdancona,
I was calling for Hillary to drop out then too Max. As a pragmatist I believed it was the right thing to do.

I hope Bernie runs as a 3rd party candidate.


HA!
0 Replies
2
Reply Fri 20 May, 2016 12:57 pm
@maxdancona,
Actually after the May primaries she tapered off the attacks once she saw the writing on the wall. Would that Sanders would do the same. He shows no sign of it yet. I imagine if Bernie shows signs of accepting his loss, Hillary will be gracious as well, in fact she already is. More so than I think he deserves.
1 Reply