Gaddafi and Assad say the exact same words you do re what they are trying to do, so the comparison is not only not ludicrous but it is required.


It is completely ludicrous. It's only required because as always, you don't have a ******* clue about what's going on. Why do you have to always say something so teeth-gratingly stupid? Don't you just ever stop for a second and think, 'For once, I won't say something so utterly cretinous, it will freeze my bowels.'

Stop trying to be clever, because that's when you let people know you're stupid. So just try to keep up, that should do for starters. Everytime you try to think, you say something stupid. Instead, say something like, 'Oh a riot, must be a frightfully noisy affair,' that way people won't think you've been snorting ralgex.
1 Reply
6
Reply Tue 9 Aug, 2011 04:28 pm
@izzythepush,
his bullshit only works if you respond to it...

he craves an argument.

It is so very important that the wrong questions don't get considered. One would be what does it mean when a nation gets all worked up over social confict in faraway lands but remains blind to the breakdown in civil society at home all the way up till the time the riots start? 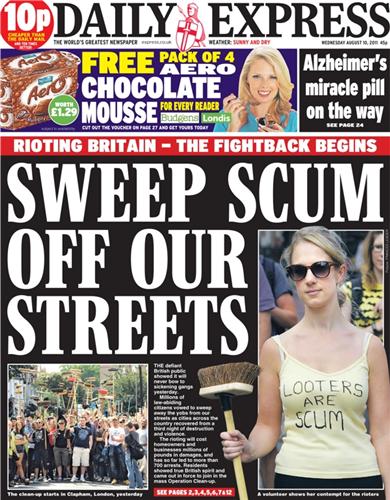 I still go with the British spirit is gonna come into force - going back to something Ceili posted that I wanted to comment on - there have been many MANY reports of "neighbours" who have come together who have never even spoken to their "neighbour" before - people coming onto the streets to help those who are homeless, who have nothing left, people just wishing to help others in their community and nationwide.

I have to believe somewhere along the line that some good has to come out of it - sad as that is. Perhaps the UK will show less tolerance for this kind of behaviour... perhaps things can change. I just don't know. It is such a small minority of people who have managed to cause so much trouble and heartbreak and the others have been swept along. No less guilty, but less of a danger when separated out.

If we really wanted to sweep the scum off our streets, we couldn't go far wrong by starting with the Daily Express. It's very typical of them to frame the story around a pair of shapely breasts.


They're all pants and b*ll*cks!

would that be by way of censorship? Mob action?

I would posted it, but ya know on A2K, you don't mess with the Bunny

Stop trying to be clever, remember, 'those looters, they must be stealing stuff.'


Didn't you claim to be a leftist??? The assets of the society always belong to the collective, and while we allow individuals to hold the assets we are always free to reposes them. This being the case I am not willing to assume that a theft has taken place, we require a hearing on the matter.
3 Replies