Break out the marshmellow and weeeenies...

Is this what your get when you have more surveilance cameras than cops... I am afraid they will find out what the Irish long ago discovered: England is full of Criminals simply looking for an excuse...

Amidst all the bad news
<snip> 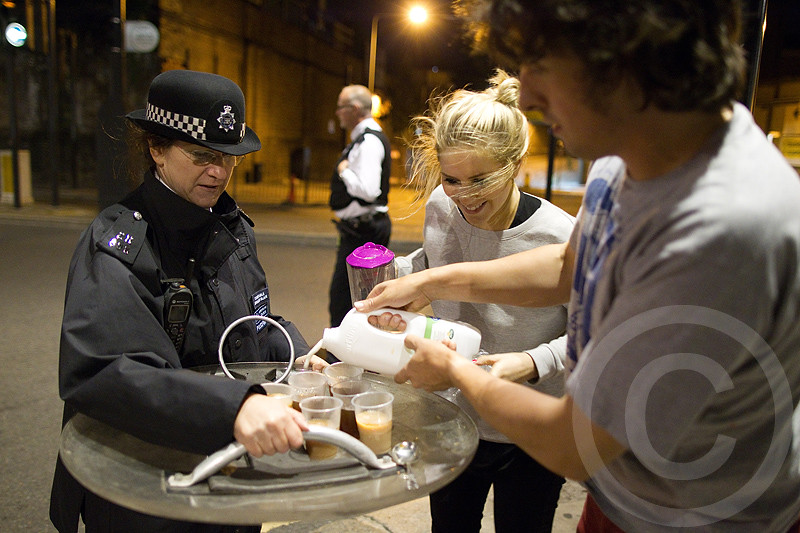 I don't believe all these kids are bad thru and thru - the mob mentality kicks in!

I don't believe all these kids are bad thru and thru - the mob mentality kicks in!

I understand a majority of the people who have been arrested so far do not have criminal records - no, I don't have the source for that information. If I find it, I will post it.

The folk who are inciting this are appealing to the kids to be rebellious, to get the respect from the authorities that they can do this and there won't be consequences - stating the police have been taking the pish for years etc etc etc.

Many of the people, not just kids, who are looting are opportunists - they think they have the right to take whatever they wish to because "everyone else is doing it" "they have the right because they say so" "they are getting their taxes back" blah blah blah - I don't believe if you took all of these people as individuals that they are terrible/bad people - however, that doesn't matter a jot right now, because what they are doing is still wrong - individually or collectively. They get into the mob mentality and do things that possibly - POSSIBLY - they would not ordinarily do.

Perhaps I am wrong, I don't think so tho!


People often do things they wouldn't ordinarily do, whether it's right or wrong / happy or sad, when there is a crowd. The fear goes. In these situations, that's a very dangerous way to be. 0 Replies
1
Reply Tue 9 Aug, 2011 01:13 pm
@Walter Hinteler,
I hope tonight that sticks and bats won't replace the brooms - I have a feeling tho that, if this continues and the police don't have the ability to stop this from happening, that people will start to attempt to protect themselves.

We should have a Police Force - right now we have a Police service with communities up in arms (!) about the fact they aren't being protected because areas are knowingly being targeted. How can the police protect them when they are trying to stop what is going on? They can't.

Of course, if the police go in heavy handed, they will be nobbled themselves.

I haven't heard that expression before.
0 Replies
3
Reply Tue 9 Aug, 2011 01:28 pm
An interesting thing happened in the aftermath of the recent riot in Vancouver. The citizens, not just in the city, but in the province and country were disgusted. The anger was palpable at the unnecessary damage. The police were soon inundated with pictures of the rioters and they reposted on the Police site. However many of the same pictures were posted on facebook and youtube and then the jerks were quickly identified and publicly named. Death threats were made against rioters and a few of their families. People copied and reposted a few idiot's facebook posts, bragging about their part in the riots. People were publicly shamed in newspapers, t.v. and on the internet. It would be interesting to see if the disgust level in London is high enough to do the same. I'd never seen it here before either. People also came out in droves to help clean the city up.
Maybe it's a sign of the times.. While in England has a plethora of cameras, in Vancouver it was pictures and video from iPhones etc that flew across the internet, fingering the instigators and the stupid.
1 Reply
1
Reply Tue 9 Aug, 2011 01:38 pm
@Ceili,
Now that facial recognition programs are getting good everyone should assume that the state will finger them for rioting/demonstrating. This will also drive the anger towards the state, so it is not as beneficial as first blush would have it.
0 Replies
1
Reply Tue 9 Aug, 2011 01:45 pm
@Izzie,
As a gross generality, and I do mean gross in that I don't know the individuals, people who rampage are, for whatever reasons, not 'invested' in their place, at least not in the days of rampage. Some may care about their community and be angry - but I don't think that is the prime thing going on - or expressing frustration with their tough lives, or they may be opportunist thugs for a day with others - itself a coming together of individuals into a group, which is oddly another kind of community. Most of the time, though not all, rampages hurt where you live, more than it may be hurting already.

Adds, I'll be interested in whoever turn out the be the orchestrators. There may end up being some internet clues. (I know nada about blackberries and how private one's messages are in the long run.)

I don't think Ian Tomlinson's family would agree with you.


I know, and believe me, I do know there are incidents (that sounds awful, using the word incident, I can't think of the word to use - unlawful killing) - I know that the police aren't always using good policing. I really do know that.

Then of course, we could mention PC Keith Blakelock which is also what these officers are faced with right now.

Like I say, I think communities may take things into their own hands if this continues. I would dearly love to be wrong on this.

1 Reply
1
Reply Tue 9 Aug, 2011 01:53 pm
@Izzie,
If you look at what set the whole thing off, it was the refusal of the Met to talk to Duggan's family members. Rumours spread to fill up the vacuum, a popular one was that Duggan was handcuffed when shot, also a girl was set on by riot police with shields. If you don't trust the police you believe these things.

I was once stopped by the police and accused of taking part in an armed robbery. I was innocent, and eventually the police realised that, but not until after they showed me just what nasty bastards they really are.
1 Reply
1
Reply Tue 9 Aug, 2011 01:56 pm
@ossobuco,
ossobuco wrote:

As a gross generality, and I do mean gross in that I don't know the individuals, people who rampage are, for whatever reasons, not 'invested' in their place, at least not in the days of rampage. They may care about their community and be angry, or expressing frustration with their tough lives, or they may be opportunist thugs for a day with others - itself a coming together of individuals into a group, which is oddly another kind of community. Most of the time, though not all, rampages hurt where you live, more than it may be hurting already.


Yep - where we are now in this situation is far more organised tho. Areas have been targeted - the word is out and ... the mob rules until they burn themselves out. They don't think of the consequences. The shops/stores are now being cherry picked.

I don't personally know the world that these folk live in - I realise that, so I can't speak for the "why's". I do tho have a family member who lives in this disallusioned world tho - so it's a little close to home for me. I trying to understand but as I stated

Kids who don't have hope, living up to their peers ... and so it goes.

There had to be a catalyst - and the opportunists (whether that's organised crime or your general hooliganism) then took over - it is certainly organised now.

Now tho, this is not about Mark Duggan. His family have stated clearly that what is happening is not being done in his name.

I can imagine there are some nasty bastards out there. I do believe tho, as I do with the rioters, that the majority are not bad.

Again, I have only my experiences to go by. Were I in a different position, I would probably be singing a different tune. That's why I am trying to figure how this is going to stop.

Oh, I have personal experience of policing ineptitude/stupidity - my experiences tho are not of this nature.


Milwall is supposed to playing at Argyle tonight - (no.thankee.verra.much) - not sure if this has been cancelled!

1 Reply
1
Reply Tue 9 Aug, 2011 02:08 pm
@Izzie,
I edited, in that I think the people who care about their community at the same time they were angry, were staying home. Also added a line about the orchestration..

The young participating, I'll go with a guessed mix of not invested (as you say, no or little hope, felt lack of connection, for whatever reason and whatever amount of time) and opportunity with a group.
0 Replies