The Case For Biden

Biden’s Sunday Twitter statement capped a long week in which the not-quite-candidate was rocked by a series of controversies, culminating in a Friday story in the publication The Cut in which Nevada’s former Democratic nominee for lieutenant governor, Lucy Flores, accused him of an “awkward kiss.”

Flores’s account was met with non-denial denials by Biden’s spokesman and Biden allies who called into question her account, while some of Biden’s likely presidential primary opponents said they believed her. Flores appeared Sunday on CNN’s State of the Union and amplified her comments.

“I want him to change his behavior,” Flores told Jake Tapper. “And I want him to acknowledge that it was wrong.”

Biden’s statement — in which he promises to “remain the strongest advocate I can be for the rights of women“ — steers clear of accusing Flores of lying but stresses that in his four decades of public service he has “offered countless handshakes, hugs, expressions of affection, support and comfort. And not once - never - did I believe I acted inappropriately. If it is suggested I did so, I will listen respectfully. But it was never my intention.”

“I may not recall these moments the same way, and I may be surprised at what I hear,” Biden’s statement said. “But we have arrived at an important time when women feel they can and should relate their experiences, and men should pay attention. And I will.”
1 Reply
3
Reply Sun 31 Mar, 2019 08:31 am
@Lash,
I believe both of them. Biden was probably just being himself, I believe him when he said if did do it, it was not with the intentions as described but I also believe Lucy Flores took it the way she way she describes and she was just as uncomfortable as she describes she was. How it plays out politically, I don't know.
1 Reply
-1
Reply Sun 31 Mar, 2019 09:42 am
@revelette1,
If being yourself equates to unwanted touching and kissing of women and girls, ‘yourself’ needs to be sued—most certainly not elected president.

We have photographic evidence of his behavior—much more damning than the He Said, She Said consternation that make determinations so difficult.

There are so many pics of him doing this to women and girls that several memes exist that didn’t require retouching...

3 Replies
6
Reply Sun 31 Mar, 2019 09:59 am
@Lash,
Probably true, but I'm more inclined to accept revelette's position here: it probably doesn't really amount to anything harmful or serious to those involved. Unfortunately in today's somewhat hysterical climate it is indeed likely to harm his candidacy. It is certainly being used for that purpose in the media.
0 Replies
1
Reply Sun 31 Mar, 2019 10:10 am
He sniffed Longoria too. Even in the photo of the three of them that has been shown in most of the original articles about it you can see Joe's hand firmly holding Longoria above her waist. 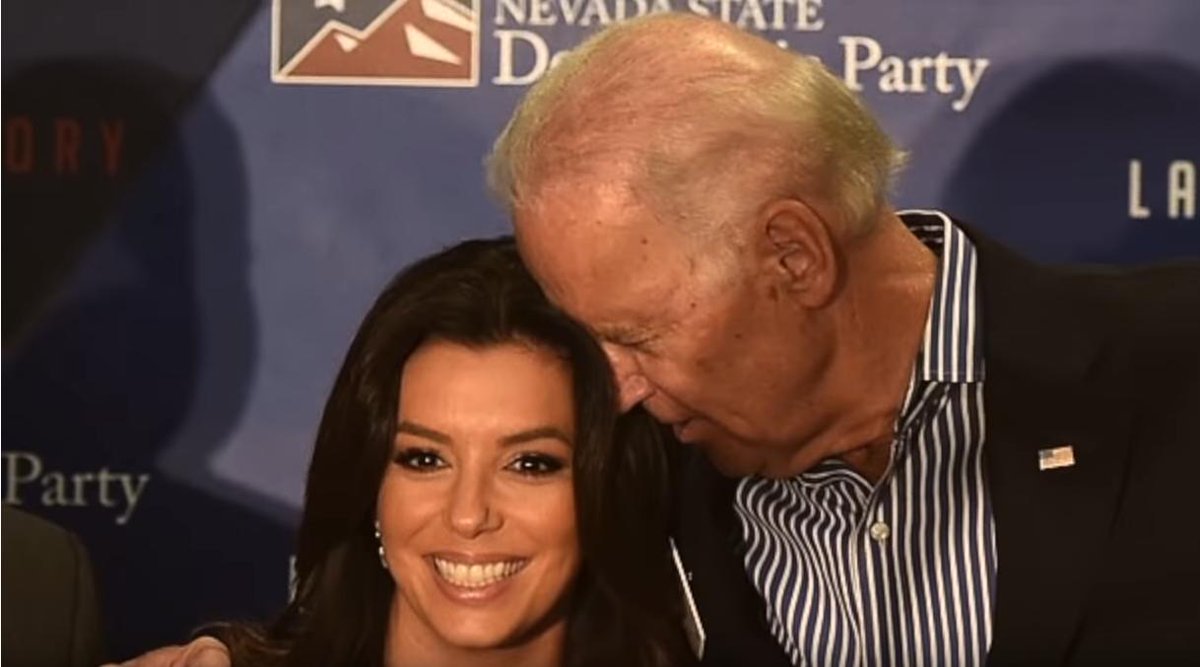 If being yourself equates to unwanted touching and kissing of women and girls, ‘yourself’ needs to be sued—most certainly not elected president.

We have photographic evidence of his behavior—much more damning than the He Said, She Said consternation that make determinations so difficult.

There are so many pics of him doing this to women and girls that several memes exist that didn’t require retouching...

I rethought my comment about being ‘sued’. I don’t think Biden’s behavior merits a lawsuit (if all he did was unwanted hair sniffing and head kissing.). But I do think that behavior such as this exists because of a globally practiced set of rules predicated on the preeminence of men over women.

I do think that behavior such as this exists because of a globally practiced set of rules predicated on the preeminence of men over women.

It is long past time to rewrite this set of rules. That conversation needs to begin in earnest.

Be careful what you wish for. You and we have a near perfect knowledge and awareness of the untoward elements of the current system (if that is the right word) . However we don't know yet what may be the unplanned (and potentially adverse) side effects of the wanted changes that may occur. For example, my impression is that many of the changes that have developed over the past few decades have brought about, largely unanticipated and adverse economic and social side effects for women, along with the "good" intended ones - any single mom or harried working mother can readily attest. There was a time when a certain obligation of deference and courtesy towards women, as well as recognition of their special and critical role in family life, was widely (but not always) recognized and accepted. That's mostly gone now, and some of the current issues are - in my opinion - related to these unanticipated side effects.
0 Replies
4
Reply Sun 31 Mar, 2019 02:10 pm
@Lash,
Quote:

..need to be sued- most certainly not elected president

Men and women have been kissing and hugging for several centuries. YES, doing this to people allegedly in their voting sectors.

Sued? How about indicating how a person feels at the time and not decades later?

Sued? Should not be president? The creature currently in the White House has not just video and photographic proof of his deeds,there has also been audio!

The damned country has gone so far back into full blown prudish behavior and reaction, that, kindergarten teachers are forbidden to even hug their 5 year old student.

A person placing their hands on my shoulders or placing a kiss on head, hand or cheek is not something I care for; but, it does not constitute some crucifiable level of crime.

If it bothers, say it at the time.

By the way Lash, some not your behavior with students might also not stand up under scrutiny. Even very limited scrutiny as can be found in a number of your threads and posts about teaching.

Times have changed and having been around for so long, Biden has become his own nightmare. I don't want him to run, but sure as heck don't want this to be how he goes out.
0 Replies
0
Reply Sun 31 Mar, 2019 04:57 pm
I’m definitely held to account on several fronts with students. I’ve had to shush a few teachers who were having conversations about students by name in front of other students—a serious confidentiality breach. A male student came behind my desk with arms wide open asking for a hug. I said no. That makes me feel so uncool, but I know my rules.

He said, “Mrs. [whatever] hugs me.” I tried to play it off as a joke, saying she was a gangster, but I knew I couldn’t hug him.

I know my boundaries and stay on the safe side of them.

I have to say—I feel pretty damn good about my decision to dedicate myself to these kids. Take it or leave it.

0 Replies
1
Reply Sun 31 Mar, 2019 06:37 pm
Inappropriate behavior with women is just one of Biden's disqualifying traits. He's made racist decisions, was a main author of the bill that imprisons so many Americans for profit, helped kill Glass-Steagall, voted for the Iraq debacle, defended Clarence Thomas - Just a few of his "progressive" traits, as he would have us believe them to be.
1 Reply
4
Reply Mon 1 Apr, 2019 08:24 am
@edgarblythe,
Perhaps so. However, the fact remains that the emerging radical left, or "progressive" wing of the Democrat Party hasn't yet produced a candidate likely to win a national election. The rejection of Biden appears to be a great favor to President Trump.
0 Replies
4
Reply Mon 1 Apr, 2019 03:18 pm
https://www.cbsnews.com/news/biden-accuser-lucy-flores-says-shed-still-support-biden-over-trump/

Asked if she would support the former vice president if he wins the Democratic nomination, Flores,... told CBSN anchor Tanya Rivero, "That's not even a question. Of course I would support Biden."

0 Replies
2
Reply Tue 2 Apr, 2019 09:03 am
If Biden decides to run, if he survives the primary, the touchy feely aspect of his run will not matter when contrasted with Trump. I still maintain he doesn't mean anything about it, but came up in different era of time in which that kind of behavior was more accepted. In other words, I don't think he was sexually aggressive with his touchy feeling hands on kind of ways with women.

Apparently some world leaders are urging Biden to run.

World leaders tell Biden: We need you
1 Reply
3
Reply Tue 2 Apr, 2019 09:16 am
I was listening to the 538 podcast on my bike ride this morning and one of the women on the show mentioned that while she doesn’t think Biden did anything disqualifying, this report has made her question how women are treated in society in general.

An example she gave, and one that I’ll give a personal example of was...when showing up at a party with my fiancé, she will hug all people at the party she knows, men or women. I will shake men’s hands and hug the women that are there that I know.

There is a difference in how women and men treat personal space. I don’t know that it’s right or wrong, and I think it’s changing especially among younger people (older people are always harder to change), but there IS a difference and it’s often an innocent one.
0 Replies
3
Reply Tue 2 Apr, 2019 09:19 am
@revelette1,
Even the women who are mention these situations are saying it was not sexual and at least one woman has said that it wasn’t even unwelcome.

Apparently he’s pretty touchy felt with men too, and the guys who run the podcast Pod Save America and worked with Biden for 9/10 years as part of the Obama administration gave several accounts of this.
0 Replies
2
Reply Tue 2 Apr, 2019 09:34 am
Interesting situation. In several respects Democrats are being made to face some of the follies of their radical left wing and the nonsensical group values,ethics and policy proposals which they wish to impose on the rest of us. Their tactics remain the same however and Biden is getting a (fairly small) dose of the stuff hurled at USSC nominee Kavanaugh.

Unfortunately for Biden, the self interest of the crowd of left wing Democrat candidates is better served by the destruction of his candidacy. Nancy Pelosi faces some related problems in her efforts to control the content of the Democrat Party Platform from the pea-brained fantasies of AOC and others.
1 Reply
3
Reply Tue 2 Apr, 2019 11:30 am
@georgeob1,
How you can compare Kavanaugh to this situation with Biden...I don't even want to go there as I know it will end in back and forth leading nowhere.
1 Reply
0
Reply Tue 2 Apr, 2019 11:55 am
@revelette1,
If you "don't want to go there ", then why did you ask?

Both were accused of hyped or imaginary sexual misdeeds a long time ago, and political motivations were behind both.
2 Replies