There's an elephant in the room.

Is he called Barbarossa?
2 Replies
1
Reply Sun 20 Jul, 2014 12:52 pm
@contrex,
You're not at all interested in substance, are you, Contrex/Romeo?
0 Replies
1
Reply Sun 20 Jul, 2014 01:43 pm
The US says " a russian missile" did it, but offers no proof. Left unsaid was who operated this missile, for sure it could have been either Ukraine or Russian forces. There are claims that Ukraine rebels captured such a system from the Ukraine forces but this has not been proven.

As usual there is less in the words of the Americans than they pretend.
0 Replies
1
Reply Sun 20 Jul, 2014 01:50 pm
I say the US should stay out of it. We shouldnt send any of our experts over there, we shouldnt share any intelligence we might have about the incident, nothing.

We should just be rubberneckers, watching to see what happens but not getting involved.
If we are asked, we didnt see anything and we dont know anything.

We are not the worlds police, so we have no reason to get involved in any way.
Let someone else handle it.
2 Replies
0
Reply Sun 20 Jul, 2014 01:55 pm
@mysteryman,
Wouldn't that be grand, MM? One giant criminal organization out!
0 Replies
1
Reply Sun 20 Jul, 2014 02:52 pm
@mysteryman,
At the end of the day it all boils down to what's in America's best interests. Is an emboldened Putin with a taste for expansionism in America's best interests?

As the saying goes, talk is cheap.
1 Reply
0
Reply Sun 20 Jul, 2014 03:08 pm
@cicerone imposter,
Russia today is not like the Soviet Union. The Soviet Union was pretty much a self contained entity, sanctions had little if any effect. Russia is part of the global economic community, targeted sanctions, asset freezes, junking the credit rating, could have a very real effect.

In London alone the property of certain oligarchs is astounding. Freeze their assets and kick them out and Putin will soon find his back against the wall.
2 Replies
0
Reply Sun 20 Jul, 2014 03:13 pm
@izzythepush,
We are all familiar with,
Quote:

Russia is part of the global economic community, targeted sanctions, asset freezes, junking the credit rating, could have a very real effect.

Those types of actions will also have a negative effect on their own economy, and that's the big 64 thousand dollar question. Can they accept the consequences of hurting themselves while hurting Russia?

That's the measurement that's needed for them to act; I think they're afraid of those consequences.
1 Reply
0
Reply Sun 20 Jul, 2014 03:34 pm
@izzythepush,
http://www.alternet.org/print/world/americas-coup-machine-destroying-democracy-1953

Ukraine's former security chief, Aleksandr Yakimenko, has reported that the coup-plotters who overthrew the elected government in Ukraine, " basically lived in the (U.S.) Embassy. They were there every day." We also know from a leaked Russian intercept that they were in close contact with Ambassador Pyatt and the senior U.S. official in charge of the coup, former Dick Cheney aide Victoria Nuland, officially the U.S. Assistant Secretary of State for European and Eurasian Affairs. And we can assume that many of their days in the Embassy were spent in strategy and training sessions with their individual CIA case officers.

To place the coup in Ukraine in historical context, this is at least the 80th time the United States has organized a coup or a failed coup in a foreign country since 1953. That was when President Eisenhower discovered in Iran that the CIA could overthrow elected governments who refused to sacrifice the future of their people to Western commercial and geopolitical interests. Most U.S. coups have led to severe repression, disappearances, extrajudicial executions, torture, corruption, extreme poverty and inequality, and prolonged setbacks for the democratic aspirations of people in the countries affected. The plutocratic and ultra-conservative nature of the forces the U.S. has brought to power in Ukraine make it unlikely to be an exception.

The disquieting reality of the world we live in is that American efforts to destroy democracy, even as it pretends to champion it, have left the world less peaceful, less just and less hopeful. When Harold Pinter won the Nobel Prize for Literature in 2005, at the height of the genocidal American war on Iraq, he devoted much of his acceptance speech to an analysis of this dichotomy. He said of the U.S., "It has exercised a quite clinical manipulation of power worldwide while masquerading as a force for universal good. It's a brilliant, even witty, highly successful act of hypnosis… Brutal, indifferent, scornful and ruthless it may be, but it is also very clever."

0 Replies
1
Reply Sun 20 Jul, 2014 03:36 pm
@cicerone imposter,
I don't think the consequences were quite as stark before now. America has been more Hawkish about sanctions than the EU prior to now. Remember the majority of casualties are from EU member countries. Things have changed.
1 Reply
1
Reply Sun 20 Jul, 2014 03:39 pm
@izzythepush,
I'm waiting to see when and how much.
1 Reply
0
Reply Sun 20 Jul, 2014 04:35 pm
@cicerone imposter,
Chronology of the Ukrainian Coup
by RENEE PARSONS
Listening to the US media, even the most diligent news junkie would find it difficult to know that the U.S. State Department played not only a vital role in the violence and chaos underway in Ukraine but was also complicit in creating the coup that ousted democratically elected President Viktor Yanuyovch. Given the Russian Parliament’s approval of Putin’s request for military troops to be moved into Crimea, Americans uninformed about the history of that region might also be persuaded that Russia is the aggressor and the sole perpetrator of the violence.

Let’s be clear about what is at stake here: NATO missiles on the adjacent Ukraine border aimed directly at Russia would make that country extremely vulnerable to Western goals and destabilization efforts while threatening Russia’s only water access to its naval fleet in Crimean peninsula, the Balkans, the Mediterranean Sea and the Middle East – and not the least of which would allow world economic dominance by the US, the European Union, the IMF, World Bank and international financiers all of whom had already brought staggering suffering to millions around the globe. 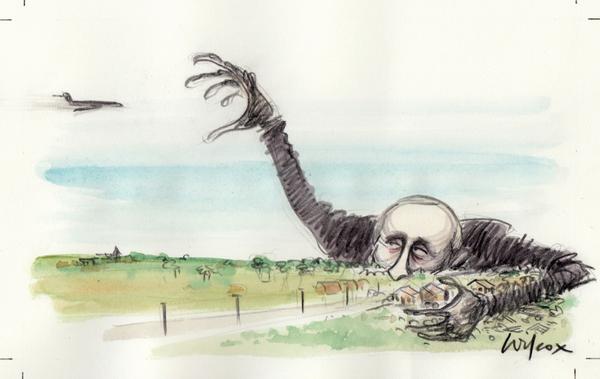 By Mike Whitney
“Washington and Brussels … used a Nazi coup, carried out by insurgents, terrorists and politicians of Euromaidan to serve the geopolitical interests of the West.” — Natalia Vitrenko, The Progressive Socialist Party of Ukraine


Ukraine is gradually succumbing to the loving embrace of the New World Order where it will serve as another profit-generating cog in Wall Street’s wheel. That’s the theory, at least. It hasn’t occurred to the boneheads at the New York Times or Washington Post that Ukraine is rapidly descending into Mad Max-type anarchy which could spill over its borders into neighboring countries triggering violent conflagrations, social upheaval, regional instability or–god-help-us– WW3. The MSM sees nothing but silver linings as if everything was going according to plan. All of Eurasia, the Middle East and beyond are being pacified and integrated into one world government overseen by the unitary executive who defers to no one but the corporations and financial institutions who control the levers of power behind imperial shoji-screen. What could go wrong?

Naturally, Russia is worried about developments in Ukraine, but is unsure how to react. Here’s how Russian PM Dmitry Medvedev summed it up the other day:

“We do not understand what is going on there. A real threat to our interests (exists) and to the lives and health of our citizens. Strictly speaking, today there is no one there to communicate with … If you think that people in black masks waving Kalashnikovs (represent) a government, then it will be difficult for us to work with such a government.”

Clearly, Moscow is confused and worried. No one expects the world’s only superpower to behave this irrationally, to hop-scotch across the planet creating one failed state after another, fomenting revolt, breeding hatred, and spreading misery wherever it goes. At present, the Obama team is operating at full-throttle trying to topple regimes in Syria, Venezuela, Ukraine, and god-knows where else. At the same time, failed operations in Afghanistan, Iraq and Libya have left all three countries in dire straights, ruled by regional warlords and armed militias. Medvedev has every right to be concerned.

Who wouldn’t be? The US has gone off the rails, stark raving mad. The architecture for global security has collapsed while the basic principals of international law have been jettisoned. The rampaging US juggernaut lurches from one violent confrontation to the next without rhyme or reason, destroying everything in its path, forcing millions to flee their own countries, and pushing the world closer to the abyss. Isn’t that reason enough to be concerned?

Now Obama has thrown-in with the Nazis. It’s just the icing on the cake.

Check out this blurb from Max Blumenthal’s latest titled “Is the U.S. Backing Neo-Nazis in Ukraine?”:

“Right Sector is a shadowy syndicate of self-described ‘autonomous nationalists’ identified by their skinhead style of dress, ascetic lifestyle, and fascination with street violence. Armed with riot shields and clubs, the group’s cadres have manned the front lines of the Euromaidan battles this month, filling the air with their signature chant: ‘Ukraine above all!’ In a recent Right Sector propaganda video the group promised to fight ‘against degeneration and totalitarian liberalism, for traditional national morality and family values.’

The Coup in Ukraine: Obama’s Dumbest Plan Yet

no, trying half heartedly to take out Assad in Syria was the dumbest plan so far, it has destabilized the region and lead to massive suffering. Either support Assad or take him out were the two choices.
1 Reply
0
Reply Sun 20 Jul, 2014 06:39 pm
@hawkeye10,
Funny how y'all are so comfortable with advancing war crimes and terrorism. Is it a genetic predisposition?
0 Replies
1
Reply Sun 20 Jul, 2014 06:40 pm
Quote:

Kerry said the United States had seen supplies moving into Ukraine from Russia in the last month, including a 150-vehicle convoy of armored personnel carriers, tanks and rocket launchers given to the separatists. I have not, do you have this on film?

It had also intercepted conversations about the transfer to separatists of the Russian radar-guided SA-11 missile system which it blames for the Boeing 777's destruction. "It's pretty clear that this is a system that was transferred from Russia," Kerry said in an interview on CNN. WOW, not even really sure? Where is the tape, maybe we can get to the bottom of this.

"There's enormous amount of evidence, even more evidence that I just documented, that points to the involvement of Russia in providing these systems, training the people on them," he said on CBS. You have not documented ANYTHING, that is the problem. What we have is the US government playing the role of prosecutor by walking into the court of public opinion with nothing more than " We know they did , take our word for it and convict". Kerry is making a habit of gross abuse of language as he tries to get what he wants.

http://www.reuters.com/article/2014/07/20/us-ukraine-crisis-airplane-idUSKBN0FP02O20140720
2 Replies
1
Reply Sun 20 Jul, 2014 06:43 pm
@hawkeye10,
You're shooting blank bullets; your opinions are based on your own imagination and nothing more. At the very least, Kerry has info from intelligence and other sources. You have NONE.
2 Replies