Forums: Politics, Democrats, 2012 Election, Humor, U S Politics
Email this Topic • Print this Page
3
Reply Tue 3 Jan, 2012 05:50 pm
@ehBeth,
Totally agree with you, ehBeth. It's come to the point where people expect a university degree to be, primarily, an entry to a better-payig job. That's not what education is supposed to be about. College and university degrees are supposed to prepare one for a more meaningful life, not necessarily a higher-paying job.
3 Replies
1
Reply Thu 5 Jan, 2012 02:00 pm
@Lustig Andrei,
Lustig Andrei wrote:

Totally agree with you, ehBeth. It's come to the point where people expect a university degree to be, primarily, an entry to a better-payig job. That's not what education is supposed to be about. College and university degrees are supposed to prepare one for a more meaningful life, not necessarily a higher-paying job.


A college diploma is a sign on the wall saying the world owes you a living... If people need an education to have a more meaningful life they will never have it... The more meaningful life is the one they give up to be years older, more narrow minded and inflexible, institutionalized in thought, and formal in method... No one ever left university more creative than they went in... What they leave with is more socially acceptable means of expressing their creativity, even though the acceptable means are often immoral beyond belief...What would the world be like if every day, those who presumed a superiority based upon a formal education actually had to prove their superiority, or even their social worth to the uneducated masses???...
0 Replies
-1
Reply Fri 6 Jan, 2012 01:52 am
@Lustig Andrei,
Lustig Andrei wrote:

. . . . College and university degrees are supposed to prepare one
for a more meaningful life, not necessarily a higher-paying job.

By whom is the supposition being made??

. . . . College and university degrees are supposed to prepare one
for a more meaningful life, not necessarily a higher-paying job.

By whom is the supposition being made??

Please tell us what u mean
by " a more meaningful life " ??


I will tell you what everyone means by a more meaningful life: What no republican will ever have because they conceive of life as dog eat dog, and rat race rat, and of every human virtue as simple human weakness...
0 Replies
1
Reply Tue 17 Jan, 2012 08:40 am
@joefromchicago,
Obama is commander in chief but congress controls the money in which to build new prisons.

And with Republicans dead-set against closing the prison, and poised to take control of the House in January, chances are virtually zero that Congress will relent any time before Mr. Obama stands for re-election in 2012.

“None of the funds provided to the Department of Justice in this or any prior act shall be available for the acquisition of any facility that is to be used wholly or in part for the incarceration or detention of any individual detained at Naval Station, Guantanamo Bay, Cuba, as of June 24, 2009,” the bill says.

The bill explicitly prohibits the transfer to the U.S. mainland of Khalid Shaikh Mohammed, the admitted mastermind of the Sept. 11 terrorist attacks.

The legislative shackles came at the same time that a new report shows 150 former detainees, or more than 25 percent of the 598 who have been released from Guantanamo Bay, took up arms or worked against the U.S. in its war on terrorism after their release

Obama did leave the rendition policy of the past administration though they say with more oversight. Many people take that with a grain of salt. However, they did stop some of the past "interrogation techniques."

The Obama administration will not prosecute US intelligence officials involved in harsh interrogations of terror suspects, the president pledged on Thursday.

he assurance came as the Justice Department released four secret memos used during the Bush presidency offering legal justification for interrogation techniques that human rights experts classify as torture, such as waterboarding.

The action comes after weeks of heated debate within the administration over whether to release the memos. Some officials were concerned that public disclosure might help Al Qaeda and build momentum for investigation of alleged acts of torture by US intelligence officials.

Many human rights activists have urged the president to authorize an investigation of torture allegations during President Bush's war on terror, with some calling for the appointment of an independent prosecutor.

But the president and Attorney General Eric Holder have decided against that. "This is a time for reflection, not retribution," President Obama said in a statement released by the White House. "We have been through a dark and painful chapter in our history. But at a time of great challenges and disturbing disunity, nothing will be gained by spending our time and energy laying blame for the past."

Within days of taking office, Mr. Obama ended the use of harsh interrogation techniques described in the memos.

One memo, dated August 2002, authorized 10 special interrogation techniques for use against Al Qaeda suspect Abu Zubaydah, including waterboarding. Under this interrogation technique, the suspect is placed on a board or table with his feet above his head, a cloth is draped over the nose and mouth, and water is poured over his face.

The technique, widely considered a form of torture by human-rights experts, triggers an intense, uncontrollable sensation of drowning.

In the memo, then Assistant Attorney General Jay Bybee acknowledged that waterboarding came close to violating the US torture statute because it constitutes "a threat of imminent death." But he added that it would not amount to torture unless the experience resulted in "prolonged mental harm" lasting months or years.

"In the absence of prolonged mental harm, no severe mental pain or suffering would have been inflicted, and the use of these procedures would not constitute torture within the meaning of the statute," Mr. Bybee wrote.

Questions had been raised about Mr. Abu Zubaydah's mental health, based in part on his actions in court proceedings at Guantanamo.

The memos were pried out of government secrecy as a result of a Freedom of Information Act lawsuit filed by the American Civil Liberties Union (ACLU). Had the administration not released the memos voluntarily, a judge would probably have ordered it to do so, analysts say.

ACLU lawyers said they were pleased the documents were released, but criticized the president's decision not to prosecute. "Enforcing the nation's laws should not be a political decision," said ACLU executive director Anthony Romero. "These memos provide yet more incontrovertible evidence that Bush administration officials at the highest level of government authorized and gave legal blessing to acts of torture that violate domestic and international law," he says.

In addition to waterboarding, the 2002 Bybee memo authorized slapping, pushing, confinement in a small, dark space, painful stress positions, and sleep deprivation for up to 11 days. It also approved a request to lock Abu Zubaydah in a confinement box with an insect.

The memo says: "You have informed us that he appears to have a fear of insects. In particular, you would like to tell Abu Zubaydah that you intend to place a stinging insect into the box with him."

"Through these memos, Justice Department lawyers authorized interrogators to use the most barbaric interrogation methods, including methods that the US once prosecuted as war crimes," Jameel Jaffer, director of the ACLU's National Security Project, said in a statement."

The president and attorney general emphasized that US officials who acted reasonably and relied on the legal advice in the memos would not be charged and face a criminal trial for torture.

Attorney General Holder said he'd informed the CIA that the government would provide legal representation, at no cost to government officials, in any legal proceeding concerning illegal interrogation methods. The pledge extends to international and foreign tribunals, Holder said.

The government would also indemnify any employee for any money damages ordered paid to torture or abuse victims and would provide representation in any congressional investigation.

"It would be unfair to prosecute dedicated men and women working to protect America for conduct that was sanctioned in advance by the Justice Department," Holder said.

Amnesty International executive director Larry Cox criticized the administration's decision not to prosecute. "The Department of Justice appears to be offering a get-out-of-jail-free card to individuals who, by US Attorney General Eric Holder's own estimation, were involved in acts of torture," Mr. Cox said in a statement.

I guess Obama made a pragmatic decision, he must have known would tick off his base, to not bog the US down with the previous administrations actions and those who had to follow those instructions so to speak.

Totally agree with you, ehBeth. It's come to the point where people expect a university degree to be, primarily, an entry to a better-payig job. That's not what education is supposed to be about. College and university degrees are supposed to prepare one for a more meaningful life, not necessarily a higher-paying job.


That certainly was the case for me, though there is a pretty good argument that one leads to another.

Cycloptichorn
1 Reply
1
Reply Tue 17 Jan, 2012 11:03 am
@Cycloptichorn,
True! The degree provides the necessary entry into the job market; what happens after that depends on what they are able to accomplish - with both job and life-style. They are necessarily connected for the majority of people.
1 Reply
1
Reply Tue 17 Jan, 2012 01:32 pm
Turkish columnist calls Perry an ‘idiot’ for Monday debate comments

"Turkey is "a country that is being ruled by what many would perceive to be Islamic terrorists," Perry said, in response to a question about whether Turkey, a top American ally, should remain a member of the NATO alliance...."


Standing Ovation for Newt
1 Reply
1
Reply Tue 17 Jan, 2012 03:27 pm
@H2O MAN,
When Newt talked about Obama providing more food stamps to Americans, the crowed cheered - as if that's a bad thing. What's more interesting about this "give-away" to the poor and unemployed is that in some South Carolina counties, the unemployment rate is over 17% - with the average state-wide at 9.9%.

Are all those people who attended the debate all rich republicans? They don't have family members or friends who would starve without those food stamps?
1 Reply
-1
Reply Tue 17 Jan, 2012 07:55 pm
@revelette,
Quote:

But the president and Attorney General Eric Holder have decided against that. "This is a time for reflection, not retribution," President Obama said in a statement released by the White House. "We have been through a dark and painful chapter in our history.

Awwwww, poor Americans. Yeah, you've been thru such a tough time.

Vomiting perfidy is what the vast majority of Americans do best.

But at a time of great challenges and disturbing disunity, nothing will be gained by spending our time and energy laying blame for the past."

Imagine that, coming from a president and the top law official in the US. Nothing will be gained by following the rule of law. But, of course, why change things now. The US has never followed the rule of law when it comes to the war crimes, the terrorism committed by US officials, the US military.

The bad thing (REALLY BAD THING) is that Obama is making more and more Americans totally dependent on government for their daily needs. Obama and his Democrat administration are the cause of this worsening problem because it is their efforts that are resulting in such high unemployment rates across the nation.


Why are Obama’s Supporters so Dumb?


No, they are really dumb... they are the dumbmasses.
1 Reply
6
Reply Wed 18 Jan, 2012 10:44 am
@H2O MAN,
It is true that the recovery is not as robust as it needs to be, but it is not true that Obama made the economy worse than Bush did or that more jobs were created during first three years of Bush presidency than for Obama. 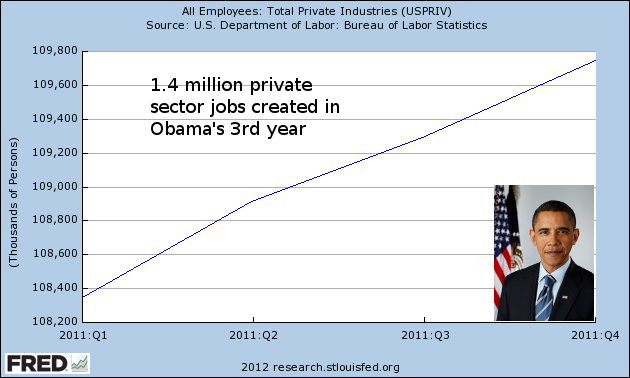 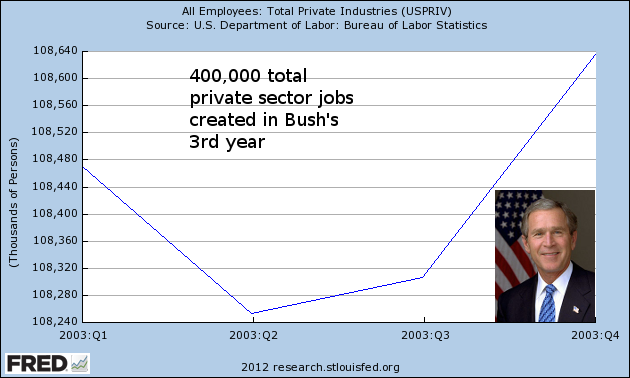 
Obama has not created or saved any jobs!

There are over a million unemployed people under Obama's
rule that were working and paying taxes under GWB.
1 Reply