Israel is officially an apartheid state

Once again, I did not say that Jews are not indigenous, so once again, you're peddling a straw man fallacy.

Whom you are willing to include is hilariously irrelevant.

Whether anyone agrees that Israeli Jews are indigenous to Israel is equally as irrelevant. They are indigenous regardless of who agrees or disagrees.
0 Replies
-3
Reply Tue 24 Jul, 2018 07:01 pm
@InfraBlue,
InfraBlue wrote:

You start by owning your obligations in regard to thier rights and pursue the extremists all the while.

Do Canada and Mexico have an obligation to let me vote in their elections?

That is not what Zionism is ultimately all about. Zionism is about maintaining a homeland for "the Jews." The way it's being carried out, it necessarily oppresses the peoples in Palestine that are not Jews.

The bottom line is that Israel's history rooted in the Holocaust automatically implies that it is against unfair discrimination and oppression due to nationalist territorialism.

The problem is what do you do when you want to overcome the pitfalls of nationalism but you can't without putting up national borders and restrictions?

The US has the same problem, really, though you wouldn't know if from popular opinion. In principle, the US is about 'liberty and justice for all,' and historically the idea was that everyone could come to the US and liberty would save them from ethnic conflict, classism, etc. Yet, not only has that not happened, much of the world rejects and hates the US and republicanism generally, prefers central control, and use the fact that the US hasn't perfectly achieved its ideals as cause to scoff at them and reject the very hope of achieving them at all.

So when you have people who reject the ideals, principles, and hope of peace in favor of attacking and ridiculing it and the people, what other option do you have besides closing the borders and waiting until there is respect and constructive attitudes emerge? It's not like you can force people to be reasonable.
1 Reply
-3
Reply Wed 25 Jul, 2018 02:34 pm
@livinglava,
Quote:

and not good arguments.

People claiming they come from a country that never existed is a bad argument? Yes it is, it is bad argument for the Palestinians. Religion motivates this conflict, and not the Jewish one.
1 Reply
-3
Reply Wed 25 Jul, 2018 06:58 pm
@InfraBlue,
InfraBlue wrote:

Your denial of reality means that Israel will get to disregard the Palestinians and take whatever land they want by force.

Well, not you alone of course. But every little contribution adds up.

Thanks for your help. When the Palestinian state is confined to Area A alone, future generations will give thanks to everyone whose intolerance made it all possible.
1 Reply
-3
Reply Wed 25 Jul, 2018 07:00 pm
@Setanta,
Setanta wrote:

Having said he acknowledges that Palestinians are indigenous, he turns around and implies that they are not citizens, and have not right to vote.

Well, yes. That is pretty straightforward. Do I have the right to vote in Canadian and Mexican elections?

Why would anyone think that residents of Gaza and the West Bank would have any right to vote in Israeli elections?

He is completely delusional, and increasingly incapable of rational discussion.

Well, yes. That is pretty straightforward. Do I have the right to vote in Canadian and Mexican elections?

Only if they are a citizen of that particular country. 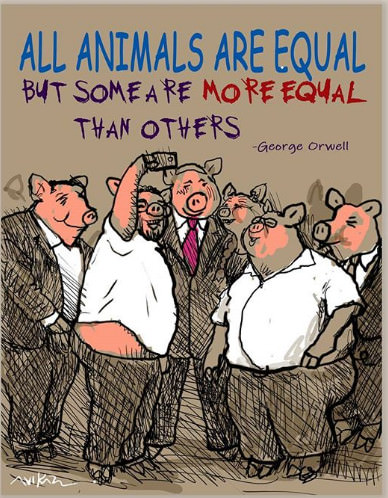 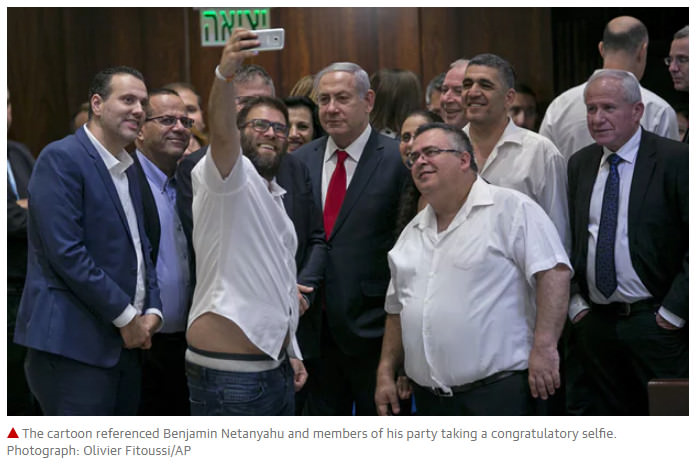 An Israeli magazine has fired its long-serving cartoonist after he portrayed Benjamin Netanyahu and his allies as pigs from George Orwell’s Animal Farm.

The illustration referenced the Israeli prime minister and members of his party taking a congratulatory selfie after passing a contentious law in parliament that has been decried as giving Jewish people more rights than the country’s minorities.

Avi Katz parodied the photo with a depiction of the politicians as characters from the 1945 novella in a cartoon for the Jerusalem Report, an Israeli English-language magazine owned by the Jerusalem Post newspaper.

“All animals are equal. But some are more equal than others,” the cartoon quoted from the book, which tells the story of farm animals revolting against their human owners but swiftly falling into authoritarianism.

1 Reply
0
Reply Thu 26 Jul, 2018 08:47 am
@coldjoint,
What does it mean for a 'country' to 'exist?' Land has always existed. Humans have always reproduced and migrated. To call a certain region of land a 'country' is an act of collective subjectivity, of territorialism. It's like if you happen upon a wild tree or plant that bears edible fruits. Are you stealing them if you take and eat them? What if you put a sign up with your name on it? Then, if someone else happens upon the tree, are they stealing because you staked your claim first? Now what if people surround you with your tree with your name on it and harass you until you leave? Have they stolen the tree, or did you 'voluntarily' abandon it because you didn't like the neighbors? Now you go make friends with some powerful people and return with weapons to reclaim your tree - does that mean you are 'stealing' it back or just reclaiming property that you were bullied out of and away from?
1 Reply
-2
Reply Thu 26 Jul, 2018 09:15 am
@livinglava,
Quote:

What does it mean for a 'country' to 'exist?'

This is not a debate on whether Israel is a sovereign country. They are. Being that they are the authority anyone who enters that country has to deal with.

The fact that Palestine, the country, never existed remains. It is a victim mentality and the so called victims are the aggressors in this case launching rockets and stabbing Israeli citizens. I consider them(Palestinians) lucky they are are still alive.
1 Reply
0
Reply Thu 26 Jul, 2018 12:29 pm
@coldjoint,
So basically what you are saying is that Israel is established as a sovereign nation, period, so anyone who has any debate about that has to 'put up or shut up?' and so you're basically encouraging war against Israel and justifying that Israel will respond by winning the wars and further establishing territorial dominance and sovereignty that way?
1 Reply
-2
Reply Thu 26 Jul, 2018 12:32 pm
@livinglava,
Quote:

encouraging war against Israel and justifying that Israel

Islam encourages war against all Jews wherever they are. Israel is where Jews can tell Islam to **** off. I have no problems with Israel they are not the aggressors.
1 Reply
2
Reply Thu 26 Jul, 2018 12:38 pm
@Walter Hinteler, 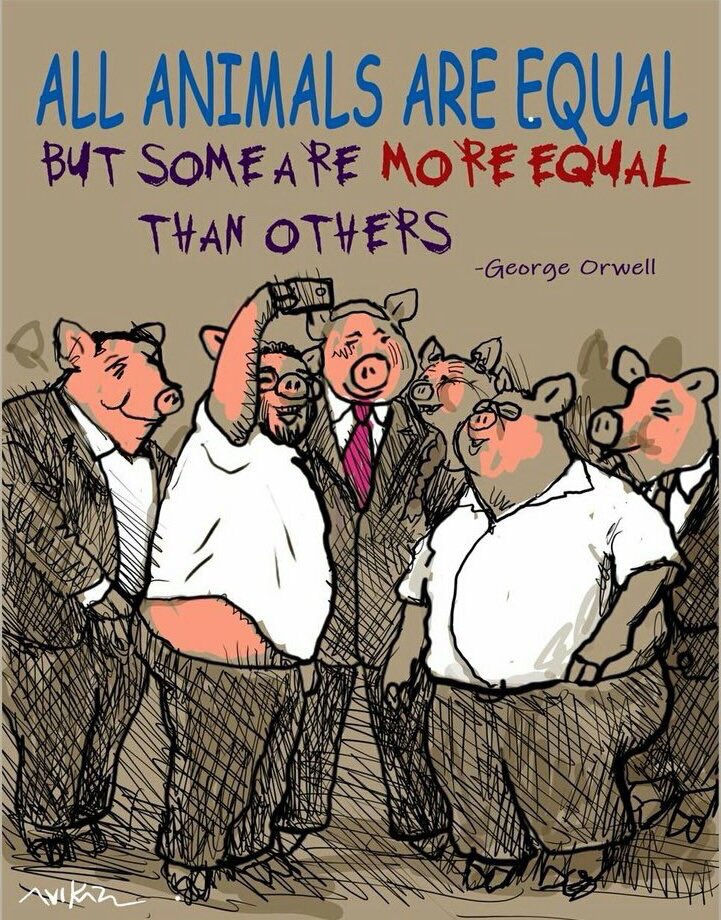 Israel will never know the peace

Because Islam is there to make sure of it. Period.
0 Replies
0
Reply Thu 26 Jul, 2018 01:27 pm
@coldjoint,
I agree that there is anti-Semitism, but it goes beyond Islam and it's not fair or right to equate Islam and anti-Semitism as synonymous because that demonizes muslims who aren't anti-Semitic or anti-Jewish (at this point you have to distinguish 'anti-Semitic' from 'anti-Jewish' because 'Semite' is a racial term whereas Islam and Judaism are religious ethnic terms.

In practical terms, the holocaust happened in Europe, which still exhibits a great deal of anti-Semitism in the form of anti-Islam. Some Islamophobes will tell you that they're against the culture/religion and not the people, but that assumes that there can't be cultural differences that aren't aligned with religious differences.

Anyway, the question is whether Israel can deal with anti-Jewish attitudes without exercising national sovereignty to exclude non-Jewish people from citizenship rights. If they can't, then why would anyone expect them to surrender to ridicule from within?

Democracy, in theory, makes it possible to have non-violent revolutions within a unified nation, but for that to happen the people being 'converted' have to consent, and for them to consent, their right of dissent has to be respected. So you could theoretically have a non-violent Israel where non-Jewish people use democratic means to undermine Jewish authority, IF Jewish people consent to that - but then you're dealing with deep religiously-rooted POVs that are probably not open to democracy any more than the Pope is going to be open to changing deeply held doctrines of Catholicism because some secular politics popularizes it.

The real question here is how to respect the right of self-determination of religious people without eliminating the ability to engage in democracy, i.e. constructive non-violent political discourse, with others who think/believe differently. Is it even possible, or does everyone in the world have no other choice but to establish independent national sovereignty and fight to exclude dissenters and repress their ability to make inroads toward influencing otherwise sovereign national politics?
1 Reply