Your headline (i.e., the title of this post) promotes hate and divisiveness. Your words are directed to "all the bleeding heart liberal divisive intolerant leftists". In other words, you're sending the message that you don't tolerate people who don't tolerate what they believe to be intolerance

Actually in the thread what made you smile today I posted president elect Trump and got a hundred and Seventeen thumbs down I think that's the record... I'm so proud!


I noticed that the voting here really isnt based on what the comment is but instead on your popularity. If you are hated your post will get thumbed down even if you are just saying hi and agreeing with the conversation.
2 Replies
0
Reply Fri 11 Nov, 2016 07:55 pm
@Krumple,
I was heartened to see the site owner say those excessive thumbs would be investigated and the perps would be permanently banned.

I was heartened to see the site owner say those excessive thumbs would be investigated and the perps would be permanently banned.

There's just no place for that kind of behavior.


Im always skeptical of how things like this get handled. What if the person used a sock account? What if they plead with the owner?

Ive persinally noticed that I might agree with a poster on one topic and totally disagree on another, but I dont vote on the poster. It seems for weeks now my posts get down voted on any topic im on even if Im in agreement with the conversation. Like the hater is only voting me down just to do it. But honestly I dont really care. I know I dont have the popular opinions and Im not a side taker just to be accepted. I know I have haters here and no matter what I post it will be attacked.
2 Replies
1
Reply Fri 11 Nov, 2016 09:16 pm
@Krumple,
In my experience--approximately 15 years of experience--the site owner follows through with his public statements.

I have no doubt he knew what was involved in the sussing and meant to do it before he made the public comment.
1 Reply
-1
Reply Sat 12 Nov, 2016 07:24 am
@Krumple,
Oh definitely definitely... But being hated by a bunch of bleeding-heart liberal divisive intolerant leftist apologists in my book as a badge of honor.
0 Replies
3
Reply Sat 12 Nov, 2016 07:46 am
@Krumple,
I'm with you it's not the poster, it's the post. That said I can't remember every thumbing down one of your, or even John's posts. But I have been amazed at thumbs down on completely innocuous posts. It seems to happen to Osso a lot, and I've never understood it. I don't think indiscriminate thumbing down is a left/right thing it's actually a sad ineffectual soul thing.
0 Replies
1
Reply Sat 12 Nov, 2016 07:50 am
@Lash,
I once created a sock account to reply to really old posts that had never got responses. Robert slapped me on the wrist - unfairly in my opinion. He can tell sock accounts. Not quite sure what his criteria is for suspending them though.
1 Reply
1
Reply Sat 12 Nov, 2016 08:17 am 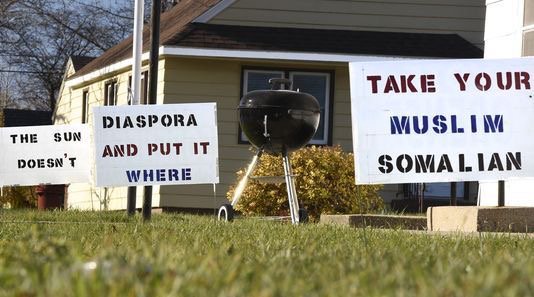 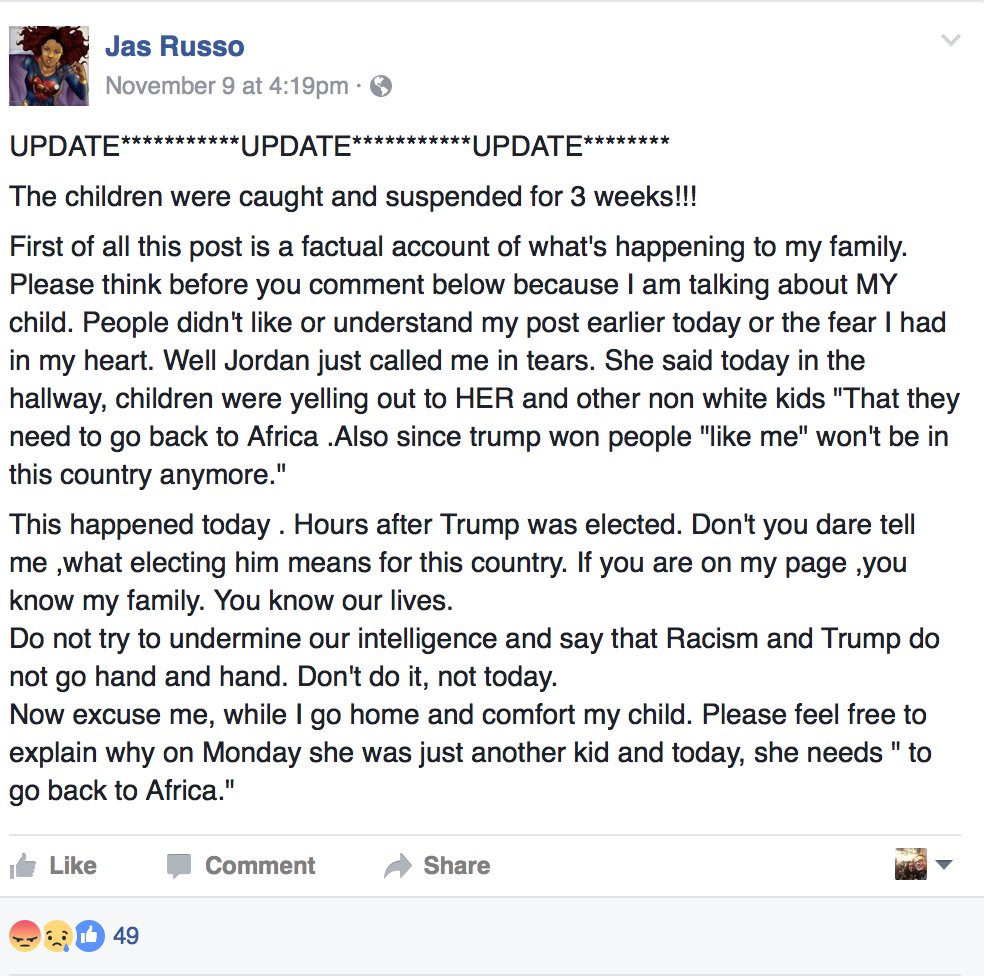 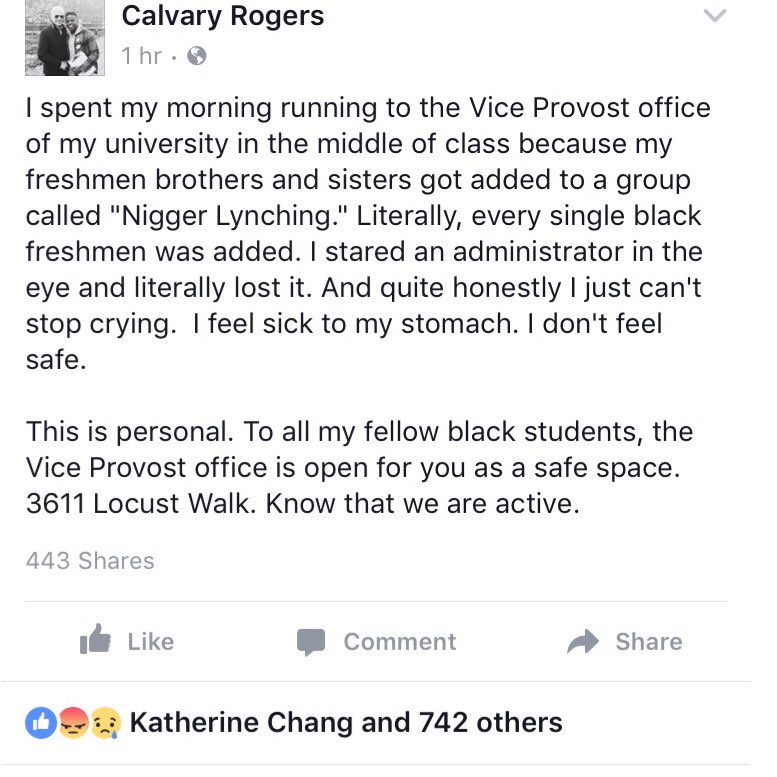 "If you’re a working journalist and you believe that Donald J. Trump is a demagogue playing to the nation’s worst racist and nationalistic tendencies, that he cozies up to anti-American dictators and that he would be dangerous with control of the United States nuclear codes, how the heck are you supposed to cover him?

Because if you believe all of those things, you have to throw out the textbook American journalism has been using for the better part of the past half-century, if not longer, and approach it in a way you’ve never approached anything in your career. If you view a Trump presidency as something that’s potentially dangerous, then your reporting is going to reflect that. You would move closer than you’ve ever been to being oppositional. That’s uncomfortable and uncharted territory for every mainstream, nonopinion journalist I’ve ever known, and by normal standards, untenable.

But the question that everyone is grappling with is: Do normal standards apply? And if they don’t, what should take their place?

Covering Mr. Trump as an abnormal and potentially dangerous candidate is more than just a shock to the journalistic system.....

.....And, most broadly, it upsets balance, that idealistic form of journalism with a capital “J” we’ve been trained to always strive for.

 But let’s face it: Balance has been on vacation since Mr. Trump stepped onto his golden Trump Tower escalator last year to announce his candidacy...."


It appears Mr. Winters is telling us that when it comes to objectivity in reporting on Donald Trump, he is a special case where the rules of journalistic objectivity should be suspended. Of course in doing so only one side of the issue is reported. They believe the case is special enough to tell the public what they should think instead of reporting the facts and letting the public decide. And this caters nicely to the low-information voter or the sheeple among us who are too lazy to move past the 10-second sound bite when forming their own opinion.

But that seems to be the same argument we've heard for Romney, McCain, George W. Bush, Ronald Reagan, and even as far back as Barry Goldwater. Apparently these were all special cases as well.

The problem of course is illustrated by the numerous surveys and studies as far back as 1964 which conclusively show that over 90% of the journalists in the United States vote democratic and are liberal... Much more liberal on average than the public.

Of course it's no secret that Academia at our nation's colleges and universities are equally as liberal. These are the people who shape our young "minds full of mush" students.

It's no wonder that this incredibly small percentage of the public now protesting and rioting over the outcome of the election is receiving an unbalanced amount of coverage.

It appears that these journalists have not only suspended their objectivity but also their common sense in that Donald Trump's electoral victory was more than decisive. They seem not at all interested in the calls for unity.

I believe we can safely assume that the only special cases are those politicians who come close to being liberal and that in reality these journalists have absolutely no objectivity and have permanently suspended the exercise of any common sense or sense of fairness.

Their display of shock at the outcome of this election is of course feigned and I'm certain the use of polls were purposely manipulated to further their agenda. I think we can close the case on the question of objectivity of these journalists.


Your headline (i.e., the title of this post) promotes hate and divisiveness. Your words are directed to "all the bleeding heart liberal divisive intolerant leftists". In other words, you're sending the message that you don't tolerate people who don't tolerate what they believe to be intolerance

That's incredibly circular statement... Almost got whiplash from reading it.

All these twitter posts about racists coming out of the woodwork is silly. They act like none of these racist outburst happened during Obama and want to blame Trump for them

Trump doesnt control these assholes and isnt to blame for their actions. Where are all the racist comments during Obama, should we blame those on Obama?

Neither are real totals. Someone likes to cheat with the votes, we will address it when we have time and permanently ban any users involved.


Within ten seconds of posting in language threads, I get voted down. Its silly.
0 Replies