Acknowledged, but not all do, and some go the other way.

The bigger point I was poorly expressing is that youth have a tendency to be progressive too. So being a data nit-picker and saying something showing how much more than normal the support for Democrats is would be much more revealing.
2 Replies
1
Reply Wed 9 Nov, 2016 10:19 pm
@Robert Gentel,
There was a bit of commentary over here suggesting that most recent college graduates (particularly white college graduates) have always voted Republican - but this was reversed in this election. Harbinger?
1 Reply
1
Reply Wed 9 Nov, 2016 10:26 pm
@giujohn,
Quote:

Oh this is rich: they are Marching in Philadelphia in protest of Trumps election. What a bunch of whiny little assholes... I've got a message for all the bleeding heart liberal crybabies... In the words of your illustrious former leader, Obammy ... elections have consequences, deal with it.

Can't make up my mind if your 80 or 8. Your commentary is often down to schoolyard jibes, and your analysis is woefully one dimensional. Or are you really 8 and don't remember the conservative sturm and drang post Obama's election? Go back and read some of the threads on A2K around that time.

Better a civil protest than a call to arms to assassinate a president.

Stop being a whiny little asshole. I'll allow you a protest when Trump's 'policy' means you're paying tolls on every new bridge and road, and your seniors home can't get any cheap labour to wipe the spittle from your chin.

0 Replies
4
Reply Wed 9 Nov, 2016 11:00 pm
@Robert Gentel,
People's partisan self-identification apparently tends to solidify fairly early in life, at least in the US, according to this famous data visualization:

The era people grew up in did a lot to determine their partisan outlook in the rest of their life; and after age 30 (and definitely 40), it generally changed only incrementally.
1 Reply
2
Reply Wed 9 Nov, 2016 11:13 pm
More deplorable action
From Twitter

Placed on their car in NC.
"Can't wait until your 'marriage' is overturned by a real president. Gay families = burn in hell. Trump 2016" 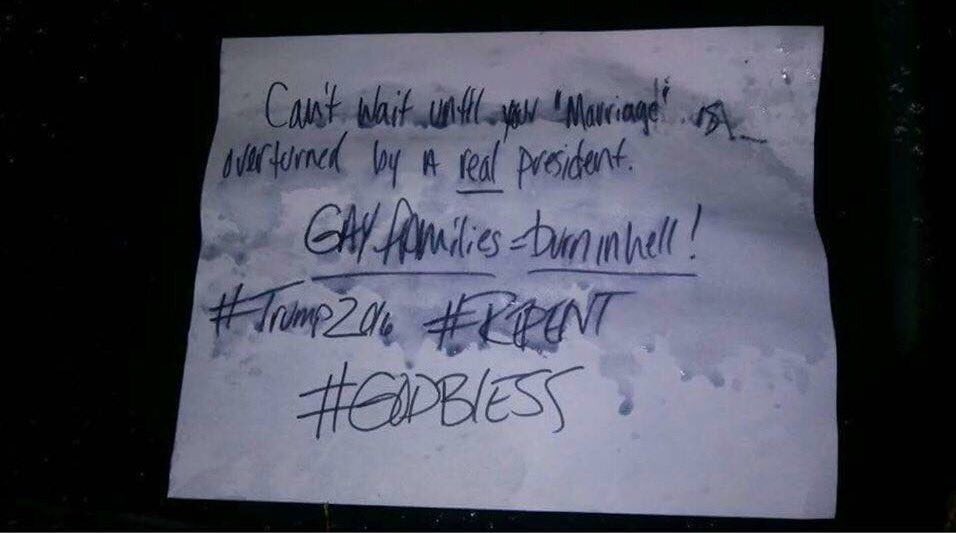 Also: hashtags on pieces of paper? That's a thing now?
0 Replies
-1
Reply Wed 9 Nov, 2016 11:37 pm
@hingehead,
Leave it to the intolerant bleeding heart liberal divisive leftist to immediately start the name calling when they don't agree with somebody. You've accused me of being at the school yard level however I never called you any names I never called you a whiny ass hole. I refered to the protesters as such. It's typical of you people on the left being the pot and calling the kettle black.

And you're going to give me permission to protest... now that's rich.

Are you trying to be ironic here? Your adjective salad is name calling immediately prior to calling out... name calling.

Just watch CNN...the hand-wringing the teeth gnashing and the crocodile tears have already started. The leftists are intolerant and divisive when it comes to anything other than what they believe and what they force others to believe. So things will go on the way they always have with the exception we will not be burdened with the Clinton crime family occupying the White House again


I am a left-leaning person. I am very tolerant of other people's views and beliefs. You're entitled to think and believe whatever you want and apply your thoughts and beliefs to your own life. However, I don't tolerate "intolerance".

1 Reply
0
Reply Thu 10 Nov, 2016 12:17 am
You just can't control yourself. Do the personal attacks make you feel as though your point is that much more relevant? And you're not American but you seem to be so consumed by our politics? I guess that's what threw me. Apparently what you haven't "twigged" to is that I'm not concerned with Donald Trump. My concern was not electing somebody who would throw my country into a constitutional crisis because she's nothing but a common Criminal who in collusion with and has the backing of the media whose agenda is to be not unbiased reporters of fact but King makers who would do so by manipulation of the low-information voter.

How long before the wall gets scrubbed?

1 Reply
1
Reply Thu 10 Nov, 2016 01:10 am
@giujohn,
Your ignorance about the US's impact on the world is astounding - but then I guess you think the US is the world. Or that the world doesn't matter because you're not in it.

Do you honestly believe that Hillary Clinton will face a court in the next four years? There's much more chance Trump will (unless he uses the levers of power now at his disposal to squash them - Berlusconi-like).

I never formed an opinion about Trump from any source other than his mouth. Robert's right, there is no point even talking to you - on other threads you've advocated extra-judicial killing - I didn't use the 'sociopath' label as an insult - it's a description based on evidence. So I'll just continue point out your bs till that bulging vein in your forehead pos.

And your last line on climate change. Bejeebus.

You have indeed been manipulated my little low-information voter.
2 Replies
1
Reply Thu 10 Nov, 2016 02:47 am
@hingehead,
Never mind, Adam Hills summed it up best last night when he said Trump's victory meant we can all go back to feeling superior to Americans. Your prime minister was criticised in the American press for eating a raw onion on the campaign trail. He could eat cold roadkill in a bus shelter and still look more statesmanlike than Trump.
0 Replies