I guess you don't really get it do you... I don't really care about all those things the only dog I had this fight was making sure that the Clinton crime family did not continue or take the Office of the President down into the gutter with them. And with the Republicans in Power she's not going to be pardoning anyone.


Of course this is a bold statement, as it either makes him an intentionally inept citizen, or a liar
0 Replies
-1
Reply Thu 10 Nov, 2016 06:37 am
@hingehead,
Thankfully you will never be able to vote in this country. And the only thing I need to know about my country's impact on the rest of the world is that you are probably living in in Freedom because of the sacrifice of people like my fellow veterans which then gives you the opportunity to spout your line of crap... You're welcome.
1 Reply
2
Reply Thu 10 Nov, 2016 06:45 am
@giujohn,
Our own veterans sacrificed quite a lot too - in stupid wars you started.

I love your perception of time. If it wasn't for England you'd be speaking French.

1 Reply
-1
Reply Thu 10 Nov, 2016 07:05 am
@hingehead,
You must be joking... Are you referring to the French and Indian Wars before we were even a country... Basically just a British colony? Let's get real here I have uncles who died pulling England's chestnuts out of the fire. And if it wasn't for people like them you'd be speaking German, not once but twice.,..Sieg Heil.
1 Reply
-2
Reply Thu 10 Nov, 2016 07:39 am
@hingehead,
Yeah, deplorable action knows no bounds.

Sorry for not being youtube, they keep pulling this from their servers...

https://streamable.com/6nwo (Video of mob of Hillary supporters beating who they think might be a Trump supporter, stealing his belonging while screaming "You voted for Trump!") Source

Real class acts...
0 Replies
0
Reply Thu 10 Nov, 2016 09:11 am
Well, I mean that's taking it to the extreme. I'd rather think they are misguided people that have had no proper upbringing who believe violence is the only way to vent their frustrations.

I also believe that they are criminals who should be prosecuted for several crimes, being so stupid as to put this on the internet as #1.

There is room for disagreement without violence. You didn't see this type of reaction from the right with either Obama election. I think it's foolish to behave in such a manner.
1 Reply
-1
Reply Thu 10 Nov, 2016 09:48 am
@McGentrix,
Extreme? Well I guess so. But then I'm reminded of I believe his name was Reginald Denny who suffered permanent damage in his ability to talk and walk in just such an incident. And I wonder if put in that situation and there had been a legally armed citizen nearby who immediately dispatched these animals if that victim of the attack would have thought it to be extreme... Just wondering.

So being a data nit-picker and saying something showing how much more than normal the support for Democrats is would be much more revealing.

According to the exit polls, this is how 18-29 year olds have voted:

So Trump did as well as Romney with this group; better than McCain; but significantly worse than Bush.

Johnson, Stein etc did better than Nader, Buchanan etc in 2000.
1 Reply
1
Reply Thu 10 Nov, 2016 10:55 am
@nimh,
Thanks. Always surprised (even though I shouldn't be) at how much negative partisanship plays a part in US politics. You could run Satan and he'd still get at least 45% of the vote.
0 Replies
0
Reply Thu 10 Nov, 2016 11:38 am
https://www.google.com/amp/www.msnbc.com/rachel-maddow-show/third-party-voters-played-key-role-election-results/amp?client=safari

I know a great number of Bernie supporters claimed they'd vote Green. Looks like they did. #DemExit

I know a great number of Bernie supporters claimed they'd vote Green. Looks like they did. #DemExit


I have a feeling that this election will be studied for a while. You're article is not the only point of view on this so far.

http://www.usatoday.com/pages/interactives/how-the-election-unfolded/
1 Reply
0
Reply Thu 10 Nov, 2016 12:35 pm
@maporsche,
Yes, but since my prognosticating is so superior to yours, you should just concentrate on my posts.

I will share a couple every now and then. Should give John some jollies, he might even see himself.

I found this under my windshield wiper at my own house. I'm in disbelief 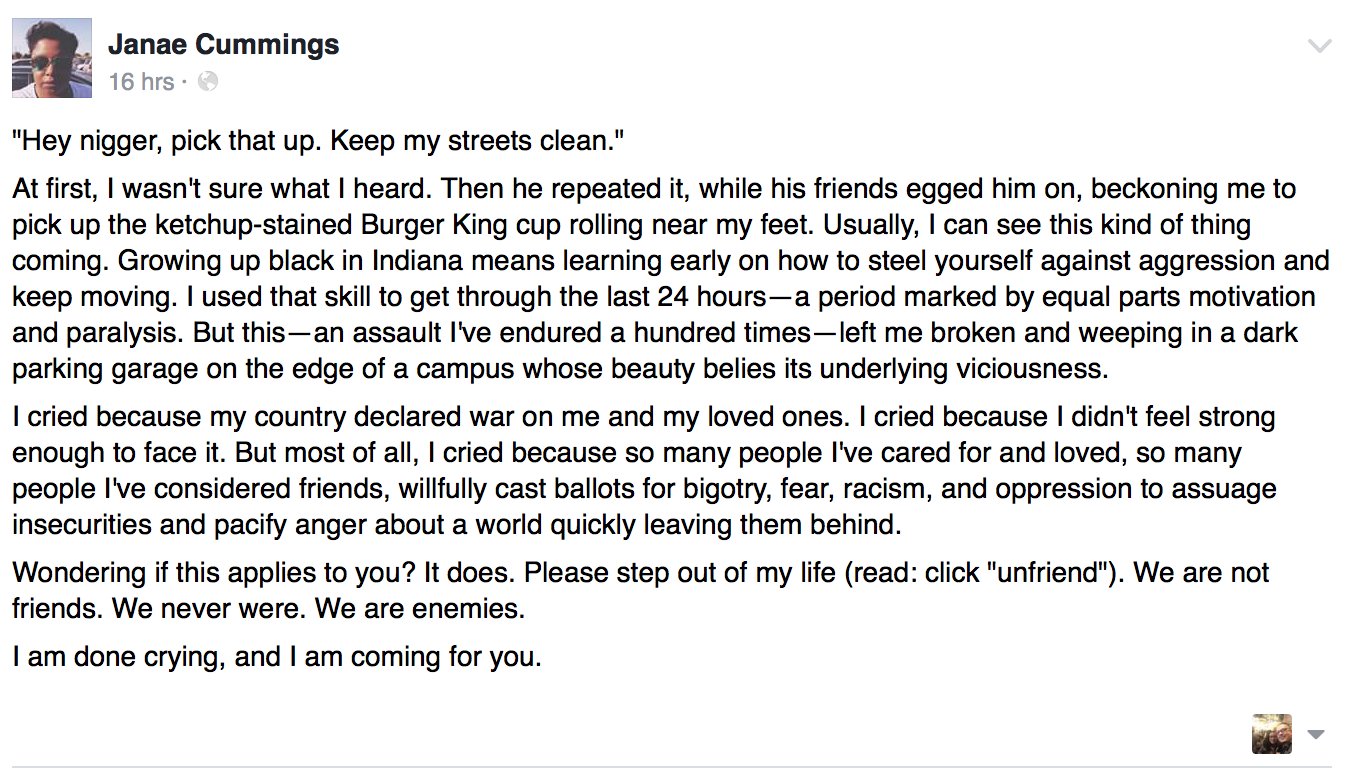 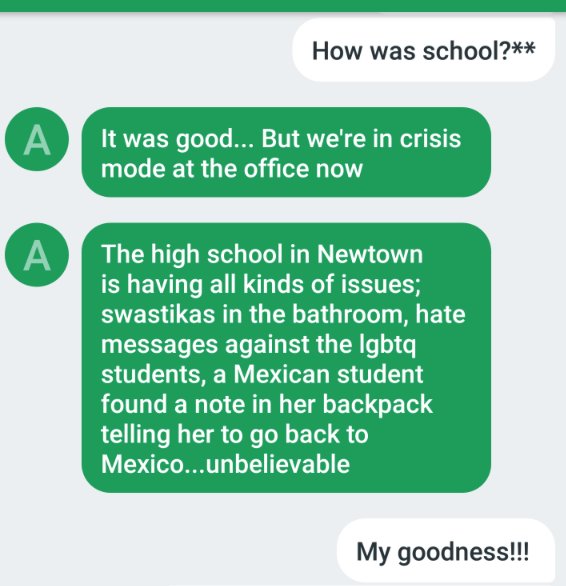 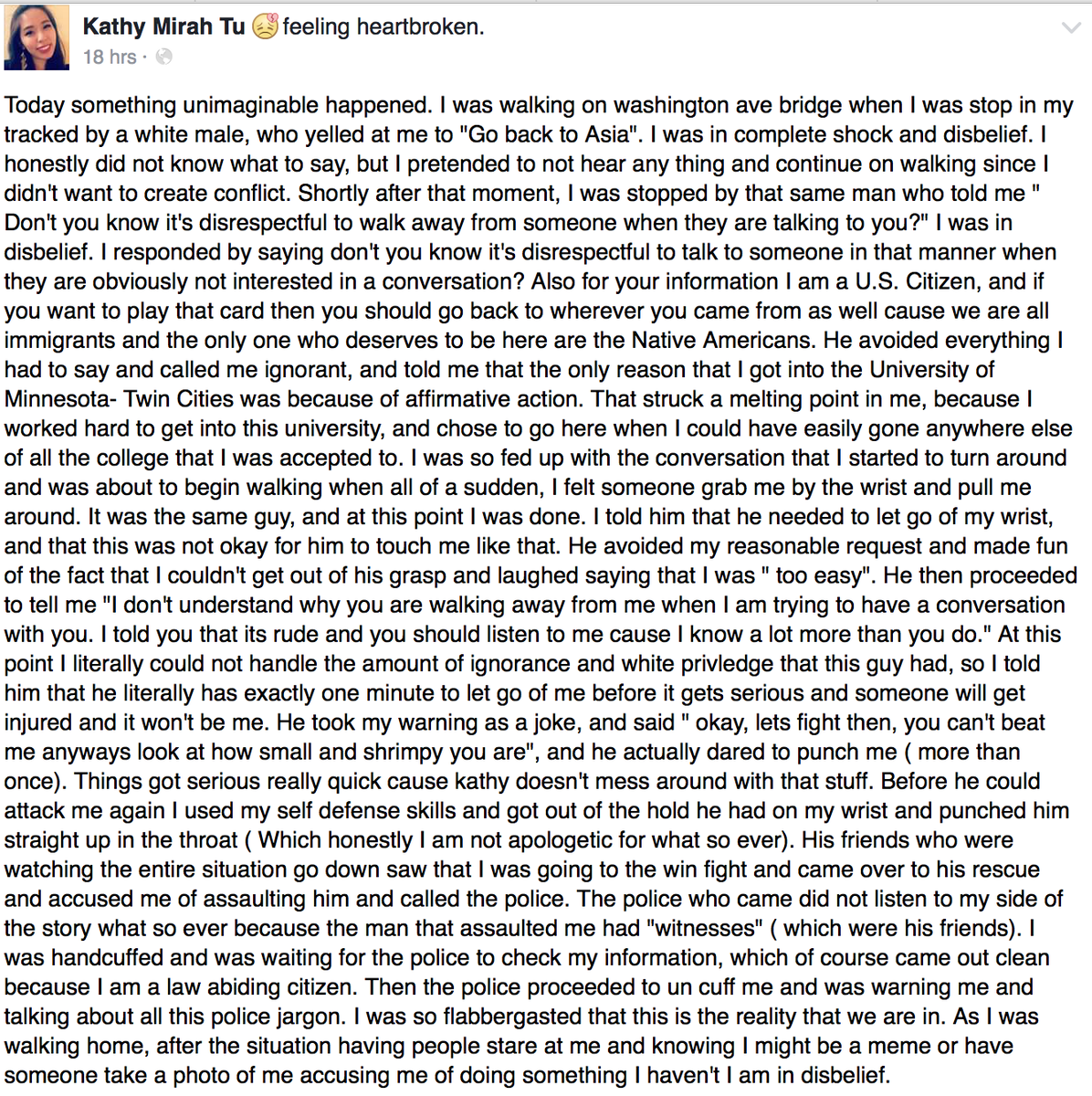 How long before the wall gets scrubbed?

Apparently it's quietly been put up again. Looks like the Donald isn't quite sure how to the hold the tiger's tail.
0 Replies
1
Reply Thu 10 Nov, 2016 04:48 pm
@hingehead,
I call BS on these claims. Since it was found out that Hillary and company were paying protesters to start fights with people, I'm going to say these are made up. Trying to justify feeling "fearful". The lies have to stop and these people need to stop making things up.
1 Reply
2
Reply Thu 10 Nov, 2016 04:54 pm
@Baldimo,
Baldimo wrote:

I call BS on these claims. Since it was found out that Hillary and company were paying protesters to start fights with people, I'm going to say these are made up. Trying to justify feeling "fearful". The lies have to stop and these people need to stop making things up.

Which claims would that be? Were there reports of voter fraud this election? I recall one story so far of a Trump voter trying to double vote, but that was about it.


Oh you must have missed all the stuff on the alt-right websites about voting machines switching votes from Trump to Hillary.

Or how last election like 4000 buses of people must have been allowed to vote in 10 different locations.
1 Reply