I am injured. Dammit.

0 Replies
2
Reply Thu 21 Feb, 2013 10:36 am
I love where this thread has meandered.
Let's see....
Flaxseed: I both grind it and use it whole. I put the powdered result in bread or plop a tsp or so into my whole wheat mush. The whole seeds end up on top of a loaf of bread or two, mostly because I like the way they look rather than for their health benefits. I use the same grinder for flaxseed as I do for everything else ~coriander, coffee, pepper flakes, bay leaf. I love putting ground up bay leaf in soups and stews, so more pungent than just the leaves.

(No, I've never noticed that the coffee tastes a bit like any of the above, but then, I am scrupulous about cleaning out the grinder.)

I'm a omnivore. I eat food, nothing processed, mostly plants and fruits, but also eggs, cheese and meats. I was a vegetarian for about seven years and Matt is right, I learned a lot about cooking in those years because the meals are seldom centered around the protein. It's more about the preparation of the veggies and the sauces, soups and relishes that add to the meal.

I still cook that way, balanced among the various steamed and roasted plants and grains, one will find a bit of fish,chicken, turkey, beef or even lamb. I make most of my own bread, it's so easy when you are used to it.

Moving on to the most important thing : ME ME ! (How come 'meme' isn't pronounced "mi-mi", most of them seem to be about some singular narcissistic momentary fixation. Right?)

Okay. I'm not fine. The trip home yesterday went spectacularly well, if it hadn't, I don't think I would be writing to you from this desk. I was exhausted and sore, managed to defrost some soup, get my computer started (when I am gone for a few days it takes forever to load all the emails and updates.) and phone my sweetie to say "goodnight".

Slept like a stone at the bottom of the ocean.

Doctor's appointment is for tomorrow at 9AM.

Here's the sunrise over Washington Heights from this morning if you haven't seen it yet on Facebook or my blog. 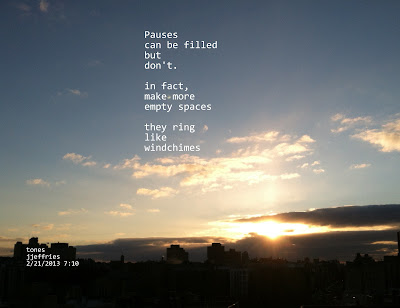 Glad you made it back in one piece. Report re the doctor (this is the one you like, isn't it?)

Grinding bay leaves, damn, I learn something new here all the time.
I wish I still had my bay trees (Laurus nobilis) - I had four pretty good sized ones.
Sob.
Yeh, add coriander seeds (or whatever you call them, wee little balls) to my list. Breadmaker to the star (me), as you know. A recent favorite is using no knead dough for flatbreads or dosas; am playing with different grains (I'm always out of something or other).

Joe, what is the mush you are talking about? I'm guessing it's cracked wheat? or?
0 Replies
4
Reply Thu 21 Feb, 2013 02:41 pm
@Joe Nation,
Hi Joe, Good threads do meander, they do ,they do. Liked your poem. Pauses like negative space in drawings are definingly,deafeningly,definitely important.
The sunrise picture is beautiful. I grew up in Inwood, was often in Fort Tryon Park. This looks like the view from one of the park's highest elevations.
1 Reply
1
Reply Thu 21 Feb, 2013 02:56 pm
@Joe Nation,
Thanks Joe,
Sorry you are not feeling perfect (you never will, nor will I).

Meme.
Yes such a popular meme it is.
Self-involved?
Of course it is, what do we expect of something that can only exist within a 'self'.
Self-ish?
Duh.
It can only spread by infecting other 'self's.
The parasite of ideas... no truer form of life...
Can a meme become self-aware?
Can a meme become a 'self' and then become the host of of other infections?
Can it infect itself?
A self-infecting loop resulting in conscious memes.
Is consciousness a self-infecting meme?

Put me in a room with access to everything..no problemo..I can quickly make a mess.
1 Reply
2
Reply Thu 21 Feb, 2013 03:51 pm
@nextone,
Negative space - first info for a newly tuned in apprentice artist who wants to wax poetic at the same time drawing.
0 Replies
3
Reply Sat 23 Feb, 2013 07:36 am
@MattDavis,
Some notes on creativity and other important things, but first, and most importantly important: the name of the mush I make many morning is
~~~~Bob's Red Mill 10 Grain um, Mush.

Okay, it's really called Hot Cereal, but, to me, all hot cereals are mush, kind of like all animals to a two year old are "DOG! Dog!DOG!"

It's good stuff, tastes a little nutty if you let it cook long enough which is about ten minutes, about twice the time listed on the bag.
Add stuff (berries, nuts, brown sugar, bananas, applesauce) as you like. I don't do any of that. (okay....I sometimes sneak a little brown sugar into the bowl, pour on the mush and then I get a sweet surprise. It's important, if you want to be surprised, that you forget you put in the sugar.

On Creativity and making it easier:
I once wrote: "Writing is hard, not as hard as not writing, but still.... ."
I know what you are talking about, it's better sometimes to eliminate the clutter around us so the creative focus can rise up. Your room experiment would be interesting to watch. Some of the artists I have had the pleasure to know would be absolutely bored to find themselves given only wire and a needlenose pliers. How limiting! I know one guy who would make a tiny sarcastic butterfly and another (engineer) who would make a perfect paperclip.
(There you go.)
If someone is stuck, then yes, cancel out the background noise.
If an artist is open, in the sense that there is awareness, if placed in a room filled to the rafters with objects and instruments, they will immediately focus on what is calling out to be made at that moment. 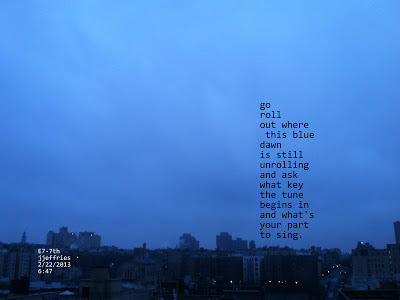 Went to the doctor's (MD) yesterday and had my first acupuncture experience. Some improvement, but I don't know if the treatment really helped.
I said to the guy
"So I told you I was using ice after activity with Naproxen twice a day and doing long slow sessions of yoga with occasional 5 on, 5 off heat treatments and you said 'Keep doing that.' I would much rather be paying you for advice that I wasn't already following. "
Nice guy, very sharp. He laughed.
Joe ( on we go...slowly)Nation
2 Replies
1
Reply Sat 23 Feb, 2013 07:55 pm
@Joe Nation,
While you seem to be waxing poetic about Washington Heights, you do know that for decades of children born there, it was just "home"? I do believe all "transplants" to NYC should develop a more nuanced identity, and stop trying to say they are New Yorkers.

Get into your time machines and see who lived in Washington Heights in 1950. Many first went to the Bronx, and then went further north. If one is waxing poetic, it is more like Gone With the Wind, in my opinion.
2 Replies
1
Reply Sat 23 Feb, 2013 07:58 pm
@Foofie,
I lived in the Bronx in 1950, yes, an interloper, and I think you are just plain crazy.

Pardon me, joeN.
0 Replies
0
Reply Sat 23 Feb, 2013 08:03 pm
@Joe Nation,
Glad you are having some improvements.
Have you ever thought of mixing some peanut butter into your mush?
I have limited options sometimes in the hospital cafeterias, often I mix peanut butter into oatmeal with raisins. Not too bad.

Thanks for the updates. I don't have much to wax poetic on at the moment.


One must have some standards, Edgar!

1 Reply
1
Reply Sat 23 Feb, 2013 11:52 pm
@margo,
Durn tootin'. I got plenty of standards. But I only picked on soy because I saw it mentioned here.
0 Replies
2
Reply Sun 24 Feb, 2013 12:00 pm
@Foofie,
Foofie:
I can tell you don't live here any more. New York City, unlike other places I have either been or heard about**, does not discriminate about who can call themselves a New Yorker. As soon as anyone starts thinking about this city as home, they can call themselves any damned thing they want.

Not everybody goes for the New Yorker name. I know an actress and voiceover artist who has been here for thirty years, she still thinks of herself as.....gah....a Californian. My oldest friend from my hometown was once married to a guy whose grandfather wrote the words to Hava Nagila. His family lived for three generations right up the stairs from here on Pinehurst and then Mother Cabrini Boulevard. His father thought of himself as an Israeli his whole life, even though he lived in Washington Heights for sixty years.

Beats the hell out of me what I am just now, unless someone asks. Then I say "I'm from the city," as if there isn't another city anywhere else. 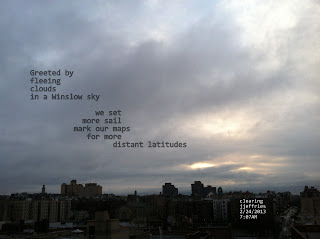 Where was I?
Oh, progress continues though slower then I want. Discovered this morning while trying to start this reluctant computer that squatting is an excellent stretching position for what ails me.

Joe(There was something else, but I forget.)Nation
**
**There's the story of Harvey, a New Yorker who moved to Vermont when he was about thirty with his Brooklyn born wife. They got jobs, worked hard, made friendships and mingled with their neighbors. Thirty years later, they retired after raising three boys, all of whom went to the Uof Vermont.
All was fine until, during a long argument at a town meeting over a drainage ditch, Harvey said something about "Speaking as a Vermonter..." and everybody laughed.
"Vermontah?" this other fellow says, "Ha-vee, you're from New Yourk, yah're not a Vermontah."
"What are you talking about? I lived here over thirty years. I suppose you going to say that my boys aren't Vermonters either??!!"
"Well, " says the fellow, "If a cat has kittens in a cold oven, you don't call them biscuits, do yah.??"[img][/img]
0 Replies
2
Reply Sun 24 Feb, 2013 12:04 pm
@MattDavis,
Hmm. I'll think about that.
I'm not big on peanut butter unless I am making Indonesian or Thai food.

I used to make my kids toast with peanut butter and applesauce, then broiled for a minute.

Joe(add some banana slices too)Nation
1 Reply
1
Reply Sun 24 Feb, 2013 11:48 pm
@Joe Nation,
Peanut butter toast with apple sauce, never would have thought of that.
Sounds like you are a pretty good dad.

To keep with the noble tradition of loose-sequiturs:
Did you add cinnamon?
Ceylon or cassia.
I guess most "cinnamon" in the USA is actually cassia, a cheaper relative of ceylon.
This cheaper cassia has high levels of a moderate toxin coumarin.
Coumarin is chemically similar to coumadin.
Which is a "blood thinner", and was originally used as rat poison.
Coumarin (from cassia) is not an anticoagulant like coumadin (aka warfarin).
Coumarin however is moderately toxic to livers and kidneys and is banned as a food additive in many countries.
Coumarin is also found in some artificial vanilla flavorings.

Did you ever see Connections (TV series)?
http://en.wikipedia.org/wiki/Connections_%28TV_series%29
Sometimes I feel like James Burke