i meant as in a they are the same person conspiracy that i just made up. watch it go viral

Mrs. Clinton just resigned and I don't see very many people chasing her.

I agree with Berty that there's a lot more than physical health concerns behind this.
1 Reply
4
Reply Mon 11 Feb, 2013 08:33 pm
@Lustig Andrei,
Until there is sufficient evidence, it's useless to infer anything. Have you ever considered the thought that he could be too pooped to pope?
2 Replies
3
Reply Mon 11 Feb, 2013 08:53 pm
@Hulk,
It does put an oddly recursive twist on papal infallibility - I mean, can the pope be wrong about himself being wrong for the job?

This the part when the evil robot's head explodes.
1 Reply
2
Reply Mon 11 Feb, 2013 09:05 pm
@hingehead,
Well anyone can play the game of semantics. Taking the side of the devil's advocate I could say Benedict XVI was right to retire early and John Paul II was equally right to hang on until the bitter end by your idea of infallibility that the pope holds. But then again to go by the book, definition of infallibility given by the First Vatican Council of 1870 refers only to when the pontiff defines "a doctrine concerning faith or morals to be held by the whole church," in which case he "possesses, by the divine assistance promised to him in blessed Peter, that infallibility which the divine redeemer willed his church to enjoy."
1 Reply
3
Reply Mon 11 Feb, 2013 09:23 pm
Retiring to Alaska....where they welcome those who don't finish their term in office

I'm not a Catholic, but I find it admirable that the current Pope is willing to surrender his vast personal power because he doesn't believe that he is capable of carrying out his responsibilities.

But the anti-Catholic, anti-Christian crowd will find fault wherever they can.

But the anti-Catholic, anti-Christian crowd will find fault wherever they can.

Not something you'd ever be guilty of, hey Finn?
1 Reply
2
Reply Mon 11 Feb, 2013 10:35 pm
@Finn dAbuzz,
I think it highly possible that his closest associates in the College of Cardinals have convinced him that his ultra-conservative stand on many issues is putting him out of step with the more progressive spirit of the times which his immediate predecessors were more ready to embrace. I believe he is a very sincere priest who has been convinced that stepping down would benefit the Church.
4 Replies
2
Reply Tue 12 Feb, 2013 02:55 am
@Lustig Andrei,
Glad you've started a thread on this Andy. There was a guy on Newsnight last night who said he'd probably go down in history as the ostrich pope. He also suggested that he may well face litigation from the victims of clerical abuse as he's no longer immune from prosecution as head of state, and he likened his situation to that of Pinochet.

For many years he was the Vatican's enforcer, charged with discipline, but he ultimately failed, refusing to defrock various priests, overiding the bishops in question, and finding any excuse to keep the abusers in the fold, too young or too old, too infirm, any excuse not to take action.

That view was echoed by David Clohessy in the US, executive director of SNAP (Survivors’ Network of those Abused by Priests), an organisation with 12,000 members: “His record is terrible. Before he became pope, his predecessor put him in charge of the abuse crisis.

“He has read thousands of pages of reports of the abuse cases from across the world. He knows more about clergy sex crimes and cover-ups than anyone else in the church yet he has done precious little to protect children.”

Jakob Purkarthofer, of Austria’s Platform for Victims of Church Violence, said: “Ratzinger was part of the system and co-responsible for these crimes.”

Under the German pope, his native country, Belgium, the Netherlands, and Austria were rocked by clerical sex-abuse scandals, triggering revulsion at the clergy in Europe just when Benedict saw his mission as leading a Catholic revival on a secular continent.

Before becoming pope, there were also major scandals in the US and Ireland at a time when Pope John Paul II had put the then Cardinal Joseph Ratzinger in charge of dealing with them.

A combination of deep rancour and disgust over the crimes and disaffection with the conservative ethics of the Catholic hierarchy has nudged the church in Austria towards schism, with rebel priests leading an anti-Vatican movement of hundreds of thousands, dubbed We Are The Church.

“He should have come clean about the abuses, but was not really able to change anything fundamentally,” said Purkarthofer. “The resignation is a chance for real change, perhaps the best thing he could have done for the church.” 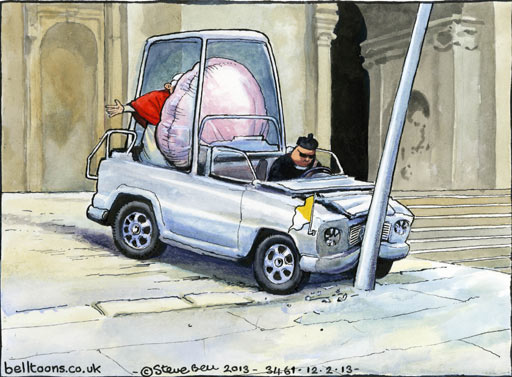 0 Replies
1
Reply Tue 12 Feb, 2013 09:23 am
@Hulk,
True, that, but some non catholics and probably some unschooled catholics think it means that it carries over to more than ex cathedra. And Ratzinger as a winning theologian (I followed the fight with Hans Kung years ago) has an air of certainty in his public appearances and statements that fit with the misunderstandings of people about infallibility.

Me, I'd like to have missed all the popes between John XXIII and now, except for the one who died lickety split, John Paul I. Oh, and a bunch of others before John XXIII.

Meantime, the recent conservative popes have seeded the college of cardinals with (I think I read) an unprecedented number of new appointees, tending toward the traditional (or retrograde) viewpoints.

0 Replies
4
Reply Tue 12 Feb, 2013 09:59 am
He could be resigning because he is really old and doesn't have the stamina to lead the church the way he wants. I really doubt anyone convinced him he is doing a bad job or he is too conservative, nor do I think his associates have been pushing him out. They elected him and his positions were well known before he took office.
1 Reply