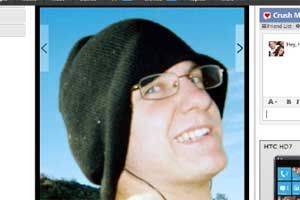 ...The suspect appears to have posted YouTube videos under the handle "Classitup10" that rail against the government and talk of revolution and terrorism. The user, identified as "Jared Lee Loughner," says in a rage-filled, rambling, and incoherent post accompanying one video:

We need a drum roll for those front runners in the election; those illegal teachers, pigs, and politicians of yours are under illegal authority of their constitution. Those dirty pigs think they know the damn year. Thirdly, tell them mother fuckers to count from 0 to whenever they feel a threat to stop their count…Those illegal military personal are able to sign into a country that they can't find with an impossible date! How did you trust your child with them fraud teachers and front runners, listener? Did you now know that the teachers, pigs, and front runners are treasonous!

In another video, the same user accuses the government of imposing "mind control and brainwash on the people by controlling grammar." Loughner continues: "You don't have to accept hte [SIC] federalist laws…A terrorist is a person who employs terror or terrorism, especially as a political weapon. If you call me a terrorist then the argument to call me a terrorist is Ad hominem."...

Thanks for the expression of sympathy. You can keep the scolding to yourself.

Did you see his press conference, it was tremendously informative -

I liked his commentary during his press conference, JPB. He also said the mentally ill are more susceptible to the vitriol. This shooter appears quite schizophrenic, in my lay opinion.

Be nice if it at least has the effect of damping down the hate rhetoric ..... At least for a while.

He sure doesn't sound very well in the head.

Then again, I am positive that if I looked up "lunatic act" in any future books, this incident will be included. And, I hope it will say, "The vitrolic acts in America ceased to exist after this incident."

Maybe it will be proven that he's a big fan of Gore, Soros, Matthews, Alinksy, MSNBC, The View and NPR.

What does 'prejudice and bigotry' have to do with this nut job trigger man?


Probably nothing. The sheriff mentioned that, but we certainly can't say that the shooter was actively involved in politics. I doubt that he was an avid listener of Rush or Glenn. There is no evidence that he hung out on conservative blogs.
He is, in your words, a nut job.
I understand the frustration of the sheriff about how incendiary language can lead to tragic results. But the shooter seems to have lived in his own dreams.

I am not sure how anything could have been done about that.
2 Replies