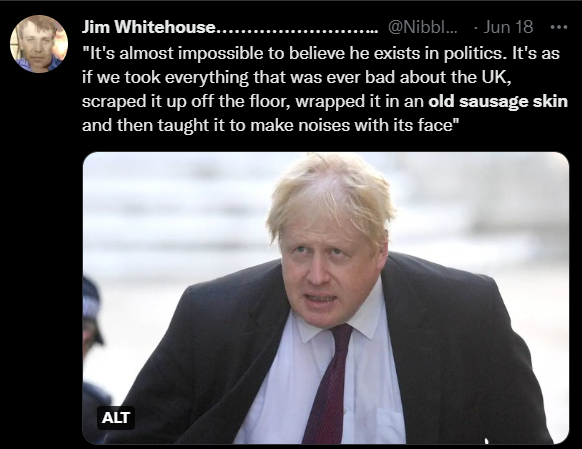 Just when I thought I’d seen it all, I open a case where we thought the patient had a lung tumor. Nope. It was a fir seed he inhaled years ago that started to grow
0 Replies
1
Reply Fri 8 Jul, 2022 12:13 am
@edgarblythe,
edgarblythe wrote:

The only decent thing he has done in his life - resign! Puts him ahead of Trump in the political game.......
0 Replies
2
Reply Tue 19 Jul, 2022 05:48 am
Guy Shares Disturbing Facts To “Ruin Your Day” And Here’s 35 Of The Most Upsetting Ones
https://www.boredpanda.com/disturbing-facts-that-will-ruin-your-day/?utm_source=facebook&utm_medium=social&utm_campaign=organic

0 Replies
2
Reply Sat 30 Jul, 2022 03:04 am
A man was getting a haircut prior to a trip to Rome. He mentioned the trip to the barber, who responded,
“Why would anyone want to go there? It's crowded and dirty and full of Italians. You’re crazy to go to Rome. So, how are you getting there?”
“We're taking United Airlines,"was the reply. “We got a great rate!”
“United Airlines!” exclaimed the barber. “That's a terrible airline. Their planes are old, their flight attendants are ugly and they're always late. So, where are you staying in Rome?
”
“We'll be at the downtown International Marriott."
“That dump! That's the worst hotel in Rome. The rooms are small, the service is surely and they're overpriced. So, whatcha doing when you get there?”
"We're going to go to see the Vatican and we hope to see the Pope."
"That's rich," laughed the barber. “You and a million other people trying to see him. He'll look the size of an ant. Boy, good luck on this lousy trip of yours. You're going to need it!”
A month later, the man again came in for his regular haircut. The barber asked him about his trip to Rome.
“It was wonderful," explained the man.“Not only were we on time in one of United Airline's brand new planes, but it was overbooked and they bumped us up to first class. The food and wine were wonderful, and I had a beautiful young stewardess who waited on me hand and foot. And the hotel! Well, it was great! They'd
just finished a $25 million remodeling job and now it's the finest hotel in the city. They were overbooked too, so they apologized and gave us the presidential suite at no extra charge!”
“Well,”muttered the barber. “I know you didn't get to see the Pope.”
“Actually, we were quite lucky, for as we toured the Vatican, a Swiss Guard tapped me on the shoulder and explained that the Pope likes to meet some of the visitors, and if I'd be so kind as to step into his private room and wait, the Pope would personally greet me. Sure enough, five minutes later, the Pope walked in. As I knelt down he spoke to me.”
“What did he say?”
“He said, ‘Where did you get this lousy haircut?"
1 Reply
1
Reply Mon 1 Aug, 2022 02:30 pm
@Builder,
Did you tell the Pope you got that haircut in Logan Central???
0 Replies