Forums: Politics, Guns, Gun Control, U S Politics, American Conservatives
Email this Topic • Print this Page
3
Reply Sat 19 Jun, 2021 12:02 pm
@mommabear,
Now that is interesting. I have a personal experience with an M-16, my first husband had one he liberated from the Armory in Towson. Fortunately for me and my son, we didn't get murdered that night and I moved out immediately. Never spent another night under the same roof with him again.
1 Reply
-2
Reply Sat 19 Jun, 2021 12:10 pm
@MontereyJack,
MontereyJack wrote:

Your attempts to convince us it is really just about some high-minded principle of constitutional civil liberties rather than what it actually is about, which is gun violence and murder is the virtue signaling and it's immoral.

That is incorrect. Pointing out facts and reality is neither virtue signaling nor immoral.

Laws against pistol grips have nothing to do with trying to curb gun violence. The only reason for them is because progressives enjoy violating people's civil liberties.

There is nothing improbable or hypothetical about it.
1 Reply
-2
Reply Sat 19 Jun, 2021 02:05 pm
@MontereyJack,
MontereyJack wrote:

ar-15 type weapons are the preferred weapon in mass shooting,

the most people killed in the minimum time,

That is incorrect. AR-15s kill no faster than other semi/pump/lever long guns.

so they're a good way to start trying to control the carnage, a first step in the absence of effective steps we're at now.

That is incorrect. Attempts to outlaw them have nothing to do with trying to limit carnage. Progressives merely enjoy violating people's civil liberties.
1 Reply
2
Reply Sat 19 Jun, 2021 03:38 pm
@oralloy,
that last is a flat out lie. 17000 innocent people were killed by gun violence last year. that is a FACT. They were killed by GUNS, not knives. that is alkso a FACT. Most people find that unacceptable, no matter what excuses the virtue signalling gun zealots produce so that the carnage can continue.That is also a FACT. All you do is make excuses so walmaer murders and workpolace murders and road rage murders, and household murders can continue unabated. No more lame excuses. ACTION. fortunately the biden admin gives some evidence that it's going to keep the pressure on until something is done. Wit some luck, maybe they can even put the corrupt NRA our of business and its leaders in jail. It'd be a start.
1 Reply
2
Reply Sat 19 Jun, 2021 03:40 pm
@oralloy,
Unproven hypothetical. time to ban the guns that do in fact year after year commit the murders and test it out. We know they dokill and do it year after year. that is a fact, not a hypothetical. time to remove that FACT>
1 Reply
-1
Reply Sat 19 Jun, 2021 04:46 pm
@MontereyJack,
That is incorrect. Statistics are quite clear on the fact that gun availability has very little impact on homicide rates. There is nothing hypothetical about it.

And no. Request denied. The American people will not allow progressives to violate their civil liberties for fun.
1 Reply
-2
Reply Sat 19 Jun, 2021 04:50 pm
@MontereyJack,
MontereyJack wrote:

that last is a flat out lie.

No it isn't. You cannot provide any alternative motivation for outlawing AR-15s besides the fact that progressives enjoy violating people's civil liberties.

So what? They'd be just as dead if they were killed with knives.

Most people find that unacceptable,

That is incorrect. Most people find it completely irrelevant what sort of weapon a murderer uses to commit his crimes.

no matter what excuses the virtue signalling gun zealots produce

It is pretty silly to falsely accuse people of virtue signaling when progressives are the only ones who are doing it.

Empty and meaningless acts to demonstrate that you care. Now THAT'S virtue signaling.

If progressives want to take dramatic action to demonstrate how much they care, I suggest they try burning down their own homes.

No insurance fraud though. Come clean with the investigators that you guys burned down your homes voluntarily.

Just think what a dramatic statement that would be. It would truly prove to the entire world how much you all care.

fortunately the biden admin gives some evidence that it's going to keep the pressure on until something is done.

Now you're just being silly. The Biden Administration lacks legitimacy and isn't capable of doing anything at all.

But even if they did have real power, the NRA is even more powerful. Barack Obama devoted the entire first hundred days of his second term to attacking the NRA. The NRA broke him and ruined his presidency.

Wit some luck, maybe they can even put the corrupt NRA our of business and its leaders in jail. It'd be a start.

It's noteworthy that progressives hate the entire Bill of Rights, and not just the Second Amendment.

you're reaching new heights of stupid rhetoric here with the illogical burning down your house motif. shame on you.

Virtue signaling is indeed pretty dumb. Note that it's only progressives who want to engage in such nonsense.

So what? They'd be just as dead if they were killed with knives.

and ar-15s are reportedly the most popular long gun today, and they are used widely in mass shootings. that is a motive for baning them.

No it isn't. Not when AR-15s are no different from any other ordinary gun.

doesn't matter if you disagree--you don't run the country, thank the gods.

Actually it does matter. You'll never pass any new gun control without first getting the support of moderates like me.
0 Replies
0
Reply Sat 19 Jun, 2021 08:34 pm
@glitterbag,
Quote:

Out of curiosity, have you ever been close to one when it emptied it's clip?

The word yoiu want is "magazine", a clip is something else and relates more to older kinds of millitary rifles.

But I don't quite get the question, what is supposed to happen after you fire the last round in a magazine with an M16??
1 Reply
0
Reply Sat 19 Jun, 2021 08:48 pm
Anybody here ever see one of these? This is one of my favorite semiauto rifles called an STGW57 i.e. the thing that replaced the K31 rifle in the Swiss army in 1957. 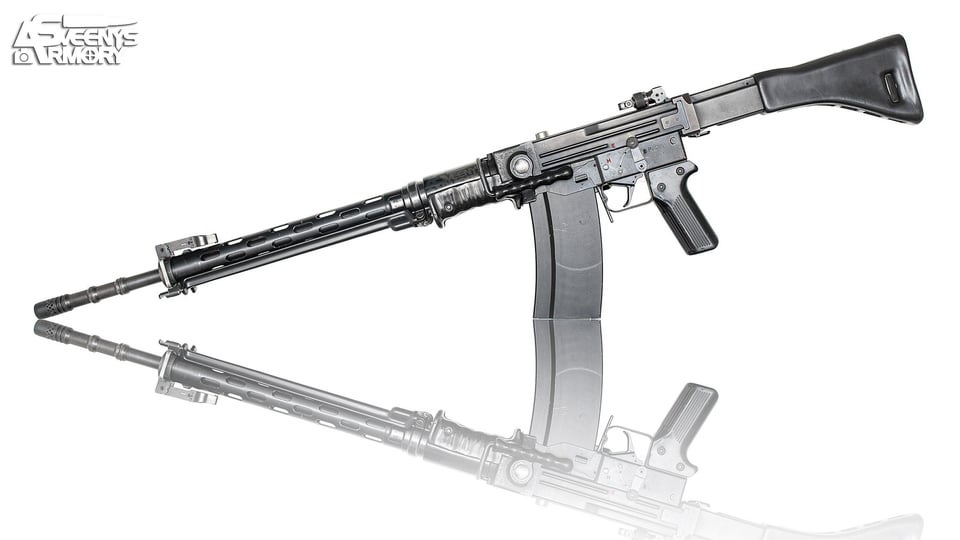 0 Replies
2
Reply Sat 19 Jun, 2021 08:55 pm
@mommabear,
This was a Viet Nam era M-16, Ex-husband was Airborne. He called the 'magazine' a banana clip. It's alright if you are confused, if you can't tell the difference between an M-16 and a toilet I have no words for you. By the way, what happens when you fire the last round is the weapon IS IT IS now empty. M-16's are very loud, having one pointed at you is terrifying. I doubt I would have been terrified if the SOB chased me with a toilet, probably just incredibly pissed.
1 Reply