0 Replies
1
Reply Thu 22 Feb, 2018 05:07 am
The shame of it is not that such jokers prance around and play out their fantasies, but that those with no other source of knowledge think that they represent their ancestors and their way of life.
0 Replies
1
Reply Thu 22 Feb, 2018 08:55 am
Druidic tradition may not date back to pre Roman times but it is older than the mid 20th Century.

Arising from the 18th century Romanticist movement in Britain, which glorified the ancient Celtic peoples of the Iron Age, the early neo-Druids aimed to imitate the Iron Age priests who were also known as druids.

They may be misguided, but one could never accuse them of being dull, and there's a connection with the land, with the people, all part of our mixed up heritage of myth, legend and history.

Just because some tedious little Anglophobic bigot with an axe to grind because he has no real history of his own takes exception to them doesn't mean we should pay any attention to him.

He's just another malign foreign influence, one with no connection, understanding or love of the place, just sneers and snide insults towards a group of people who for all their faults deeply love and revere Henge.
1 Reply
1
Reply Thu 22 Feb, 2018 09:02 am
@izzythepush,
There is no reason to conflate these modern loons with the Druids of my ancestors, and I consider them offensive. Even were one to date them to the mid-18th century--and I sincerely doubt any such connection--that still puts their origin more than a thousand years after the last true Druids disappeared in Britannia and Gaul. They're phonies, and I also doubt their connection to the land. I suspect they arrive at Stonehenge in their Rovers or their Fiestas, carrying their "smart" phones and carrying industrially produced snacks. When these types actually go out and produce their livelihoods from the land, as did their Digger ancestors in the 17th century, I might give them credit for the effort. Druids they ain't.
1 Reply
2
Reply Thu 22 Feb, 2018 09:27 am
@Setanta,
What's offensive is a foreigner with no connection to the place, people or culture attacking a group of people who are doing no harm to anyone. Trying to claim some ancestral connection when there's no records going back that far just compounds the insult.

You accuse others of living in a fantasy world yet now you're directly related to pre Roman druids because one of your ancestors came from Ireland. It's beyond a bloody joke.

Stonehenge is ours, it's got absolutely nothing to do with you, nothing at all.
1 Reply
1
Reply Thu 22 Feb, 2018 05:42 pm
We had biker gangs named "Devil's Druids" which I thought a rather incongruous mix. Most of them got busted in Coatesville in the middle 90's when bikers became passe in favor of more home grown drug cartels
0 Replies
0
Reply Thu 22 Feb, 2018 06:19 pm
@izzythepush,
This is your method, root and branch, and has been since the day you arrived. You take the piss, you pick a fight, and then get all p0pe holy with your phony indignation. All you've ever done here is make trouble, and above all, too attack the United States and Americans.

All of my ancestors were Irish, with the exception of my Scots great grandmother. I don't need you to tell me about Druids. You don't need a weatherman to know which way the wind is blowing, and you don't have to be English to see those clowns as a pack of phonies.

You must be happy now--all you ever come here for is to stir the turd.
1 Reply
2
Reply Fri 23 Feb, 2018 01:50 am
@Setanta,
I never said a word about you on this thread until you insulted genuine people who have a real connection to Stonehenge because of some imagined link you supposedly have.

When I first arrived on A2K you attacked me, and Contex, and Fresco for that matter, just because we're English and your bigotry is ingrained. You started it. And yes, I did take the piss, because you invite ridicule, you're so sneering and arrogant just because you can regurgitate, (highly revised and biased,) bits of historical data yet you have no wit or sense of humour. You're very dull, tedious and petty.

Have you ever even been to Stonehenge? I doubt it. Well I go there a lot, and as I'm having to visit a sick relative in Bath I drive past it quite often. It never ceases to fill me with a sense of wonder. I only live just over 32 miles from the place. I have a connection, this is where I'm from.

And so do the druids, I've met quite a few of them, there's no doubting their sincerity, their love or their deep seated spiritual connection to the place even if it may be misplaced. They liven things up, add a splash of colour. They're ours, and they're as much a part of our culture as the stones themselves.

You have no connection, you're a foreigner, an American. Stonehenge wasn't built by Americans nor is it in America. It's here, it's ours. The druids aren't jokers, what's a real joke is an American living in Canada pretending to be Irish who thinks he can sneer and insult people who live over here and cherish our heritage. Our heritage, not your heritage. This place has nothing to do with you, and any claim you may have had you long abandoned when you abandoned these shore.

It's not as if Stonehenge is even in Ireland, the place you claim to be from.

I wouldn't mind so much if there was any consistency in what you say. You've got a decidedly pick 'n mix approach to appropriating our culture. Magna Carta? You'll have some of that so you can attempt to portray your system of government as having a deep rooted democratic tradition. Yet when it comes to the crusades that's got nothing to do with you. Well the Arabs don't see it that way, and after the debacle in Iraq neither does anyone else.

You're a bloody atheist, why would you even care about what druids do?

These people have a connection to Stonehenge, their ceremonies add a bit of colour to the place and keep Stonehenge a living monument. They're not harming anyone. You are a foreigner, someone with no connection whatsoever to the place people and landscape. You're a malign influence who thinks he has the right to tell us what to do while insulting our people, our culture and our traditions.

Stick to your own country, your own place, your own traditions and keep your nose out of ours.
0 Replies
-1
Reply Fri 23 Feb, 2018 10:20 am
Of course, I have never claimed to be from Ireland--but lies and irrelevances are your stock in trade. When I saw you first at this site, you were sneering about cheese in the United States--as though you know all about a nation with more than five times the population of your silly little island with its delusions of adequacy, and a nation which stretches across an entire continent. In fact, you're the one who, from the first, displayed a narrow and uninformed bigotry.

Your rhetorical style sucks. You lie consistently, you scatter charges without substance all over the landscape, and I'm going to put you on ignore, because I won't facilitate your lust to make yourself feel important by trashing other people's threads--you don't, of course, start many threads of your own, because you know no one will show up.
1 Reply
0
Reply Fri 23 Feb, 2018 10:36 am
@Setanta,
That's the spirit. Reverting to type. You can keep your aerosol cheese, I'm sure it's wonderful. We'll keep our cheese, and our monuments, and pay no attention to sad control freaks who like telling everyone else what to do.

I'm impressed that it only took you just over eight hours to compose such a measured response. That must be some sort of record.

You have a really impressive range of rhetorical techniques, all the way from dull and insipid to dull and angry.

It's still our Stonehenge, and it's still got nothing to do with you.

Btw, I'll put you back on ignore. Feel free to cut and paste whatever historical details you want, but leave those of us who actually care about Stonehenge alone, because it's really none of your business.

2 Replies
2
Reply Fri 23 Feb, 2018 10:49 am
@izzythepush,
actually its a world heritage site(UN _WHS) so its of concern re: management and preservation. UNESCO has a say in whether you can put in a fish n chips wagon or a ferris wheel on stonehenge or nearby sites.

It's still our Stonehenge, ...

The last one, perhaps ... since these Neolithic farmers, who were responsible for building Stonehenge and other stone monuments, were almost completely displaced by immigrants from mainland Europe ("Beaker people").
1 Reply
1
Reply Fri 23 Feb, 2018 10:54 am
@farmerman,
Perhaps, they'll loose this status when they really build the tunnel. (Happened to Dresden with a new bridge)
1 Reply
2
Reply Fri 23 Feb, 2018 10:59 am
@Walter Hinteler,
Oy, next thing there WILL BE the fish n chips wagons> Imagine
petrolated, Oily, greasy ,soggy little hunks of deep fried pollack and tommycod served with a clueless version of a fried potato dripping in a sauce of hot lard.
1 Reply
1
Reply Fri 23 Feb, 2018 11:00 am
@Walter Hinteler,
I read a theory that the builders of Stonehenge, 'the grooved ware people' fled some impending disaster and founded Sumeria.

This place(s), (there's a few of them, at least three I know of,) serves fantastic fish and chips. 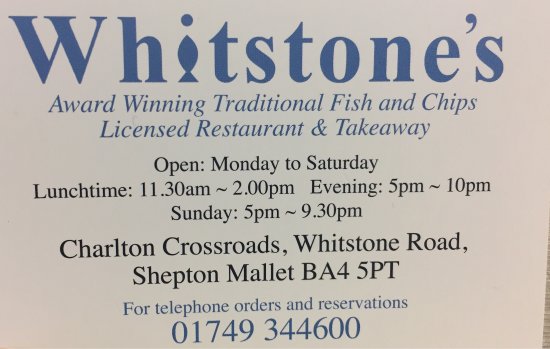 They even do trout if you're so minded.
1 Reply
1
Reply Sat 24 Feb, 2018 11:58 am
@izzythepush,
Hardly any of the food was actually in contact with the newspaper, since the fish was placed onto a small sheet of greaseproof paper, and the chips placed in a white paper bag. (but I do remember that the vinegar was dripping ...)
1 Reply