Poll: Trump got banned from Twitter for inciting violence. Do you care?

I have mixed feelings about this actually.

One the one hand, I am generally strongly in favor of free speech. I understand that Twitter is a private site, but still I think that an important platform should give a lot of latitude.

On the other hand Trump's tweets were incendiary, and it is not that much of a stretch to say that Trump was inciting violence that was causing real harm.

If there is a case where censorship is desirable, this is it.


You are not "strongly in favor of free speech." You are opposed to it. The American creed says that anyone may articulate any opinion publicly or otherwise. Sometimes exceptions are made for invocations to imminent violence. Tell me one SPECIFIC thing the president said which ought to have been censored.
2 Replies
3
Reply Sat 9 Jan, 2021 03:00 pm
@Brandon9000,
free speech does not guarantee you a right to say anything over someone elses airwaves. You paint yourself into a corner when youn want one thing to be done by private property at the cost of regulating it. That sounds like progressivism
0 Replies
4
Reply Sat 9 Jan, 2021 04:39 pm
@Brandon9000, 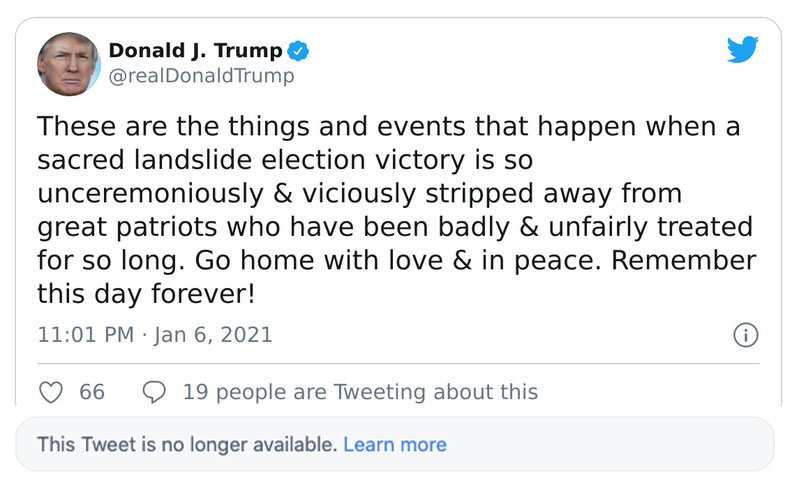 This is Trump celebrating violence, praising people who were attacking police officers and assaulting the capitol building. This is pretty hard to defend. Calling violent attackers "patriots" is awfully like yelling "fire" in a crowded theater.

https://able2know.org/topic/554978-1
1 Reply
-2
Reply Sat 9 Jan, 2021 05:15 pm
@maxdancona,
I'll get to it when I get a chance.
0 Replies
-3
Reply Sat 9 Jan, 2021 07:00 pm
@maxdancona,
1. You are now advocating the censorship of a political opinion which is not an invocation to imminent violence because you don't agree with it. Freedom of speech doesn't mean "I get to say what I think because I'm right," and it isn't just for talking about the weather.
2. No, in fact his comments are not like yelling fire in a crowded theater. Yelling fire in a crowded theater is an invocation to immediate physical action.
3. He didn't call violent attackers patriots. He seems to have been talking about citizens who are part of his movement, and even if he were, you are now censoring speech because you don't share the opinion. This means that you do not, in fact, believe in free speech.
4. He hasn't said a single word celebrating violence.
5. "Hard to defend?" Is that now the criterion for free speech? That you can defend the opinion?

In my opinion, this is the definition of incitement. Sure, there are two questions here..

- What was Trump's intent?
- Should he have known that he was risking people's lives with his words?

In my opinion, he should have known and he acted irresponsibly at best and possibly with malicious intent.

Of course, that is a question for a court to decide.

Hi. I learned recently Trump got suspended from Twitter for inciting violence. He prodded a mob of his supporters to storm the U.S. Capitol in protest of Trump losing the 2020 election:

I'm not judging. I think Trump was CRAZY to do that. No ex-president in American history, as far as I know, ever pulled a stunt like that, just because they lost a presidential election.

I think instead of spending all that time he spent on Twitter he should have taken his job a LOT more seriously. A handful of other U.S. presidents have used Twitter and other social media sites, I presume, before Trump came along, but they weren't obsessed with it.

I never heard of Bill Clinton, G.W. Bush, Obama, or ANY former U.S. president making headline news because of something they did on Twitter and/or on other social media sites.

When Trump came to the realization that there was no voter fraud after a thorough investigation, and then PUBLICLY ADMITTING that he lost to Biden, that SHOULD have been the end of the drama.

I hope Trump learned something from this.

She wrote that we don't need "technology being used by the nation’s leaders to fuel insurrection.”

Who knows what else could have escaladed if Twitter didn't ban Trump, or if Parler wasn't dropped from Google Play.

If Trump was censored on Twitter sooner, would it have saved lives?

I am not sure if this would change my opinion on the matter, but it seems important.
3 Replies
1
Reply Sat 9 Jan, 2021 07:46 pm
@maxdancona,
Trump was just a sore loser and was just mad that he lost to Biden. That's what all the craziness that transpired boils down to.

Trump needed to realize most of the U.S., and I assume most of the world, was tired of him. Between him and Biden, Biden was "the lesser of the two evils".

This is Trump celebrating violence, praising people who were attacking police officers and assaulting the capitol building. This is pretty hard to defend. Calling violent attackers "patriots" is awfully like yelling "fire" in a crowded theater.


To add insult to injury, the song "Gloria" was played during the attack on the U.S. Capitol:

On a related note:

You are being silly Brandon. What is this..

In my opinion, this is the definition of incitement. Sure, there are two questions here..

- What was Trump's intent?
- Should he have known that he was risking people's lives with his words?

In my opinion, he should have known and he acted irresponsibly at best and possibly with malicious intent.

Of course, that is a question for a court to decide.


Who gives a **** if you think he was irresponsible? I thought we were talking about free speech. Guess what? Americans have an absolute right to assemble, to protest, and to petition the government for redress of grievances. The have the right to suggest that Congress does anything they want. You show me the quotation where Trump asked anyone to commit violence. Furthermore, you have no information that Trump was calling the people who committed violence patriots. Personally, I think he was talking about his supporters in general, and you don't know any different, but even, hypothetically, if he was referring to them, it would be after the fact, not inciting them to do it. Congratulations, you are now an enemy of free speech, except, of course, for people who agree with you.

By the way, Twitter has suspended the accounts of Sydney Powell, Michael Flynn, Tom Fitton (the head of Judicial Watch), and Team Trump. Apple has removed the Parler app from its app store, and Amazon, which has hosted Parler, is terminating their account. It sounds like a large scale purge to me using the buzzwords "inciting" and "misinformation" as code words. You on board with that too? How about only people who agree with you having jobs, or housing? Better stand up for some of these people before they come for you.
2 Replies
1
Reply Sat 9 Jan, 2021 09:15 pm
@Brandon9000,
I actually agree with conservatives who are raising the red flag that the censorship is going too far. I share your concern that Google and Apple are taking a step against parler that is dangerous to us as a society.

You are making straw men arguments, ascribing positions to me that I am not actually taking. I understand you are upset, so I will let it slide. But just saying. I am not looking for more silly fights.

The question is whether Trump's words just before the capitol attack constitute "incitement" (this is the only question I am addressing here). I think there is a valid argument that Trump's words in the context in which they were given were directly responsible for the ensuing violence at the capitol building and that this result should have been predictable if not intended.

Whether Trump's words just before the capitol attack crossed the line to incitement will likely end up in a court of law.

The rest of the points you are making having nothing to do with my position.

We are going to need to step back and reevaluate after the passion of the event recedes a bit. That isn't an excuse, it is just an acknowledgment of reality.

The attack on the capitol was a big deal. Like the attack on 9/11, freedom of speech is being eroded because Americans are shocked and upset.

Progressives are filled with hate for anyone who stands up to them, and conservatives are standing up to them.

The way to protect freedom of speech is to outlaw the Democratic Party and place progressives in labor camps for reeducation (like China does with their troublemakers).

Once progressivism has been removed from society people will be free again.
2 Replies