Ive not read anything in the literature about it treating Covid successfully.

And whose fault is that? Apparently you believe that the studies I've provided you with never happened. That's some wild conspiracy you're pushing there.

Given the evidence of efficacy, safety, low cost, and current death rates, ivermectin is likely to have an impact on health and economic outcomes of the pandemic across many countries. Ivermectin is not a new and experimental drug with an unknown safety profile. It is a WHO “Essential Medicine” already used in several different indications, in colossal cumulative volumes. Corticosteroids have become an accepted standard of care in COVID-19, based on a single RCT of dexamethasone.1 If a single RCT is sufficient for the adoption of dexamethasone, then a fortiori the evidence of 2 dozen RCTs supports the adoption of ivermectin.

thats pretty much the point. the antivaxxers have lost the argument with the delta variant being mainly making the unvaxxed sick and dying

How soon you forget. I've already told you that, until two weeks after the second experimental injection, you're considered UNVACCINATED. That means that the people who've been vaccinated and getting sick anyway are being counted as among the unvaccinated.

And besides, the experimental injections DO NOT prevent infection or transmission. So what are you really talking about? You're talking about a TREATMENT. Ivermectin is also a treatment. Why don't you provide something equivalent to VAERS that shows the same injury and death rate from Ivermectin as the experimental injections are showing? That's how you disprove its effectiveness, not by invoking the word dewormer.
1 Reply
4
Reply Wed 1 Sep, 2021 08:18 am
@Glennn,
[url]until two weeks after the second experimental injection, you're considered UNVACCINATED[/url]If you don't understand virology and immunolgy - either study medicine or try to get educated about medical and biological basics.
1 Reply
Below viewing threshold (view)
-5
Reply Wed 1 Sep, 2021 08:43 am
@Walter Hinteler,
Quote:

. . .until two weeks after the second experimental injection, you're considered UNVACCINATED

If you don't understand virology and immunolgy - either study medicine or try to get educated about medical and biological basics.

You must believe that there's some kind of special insight is necessary to understand that DOES NOT PREVENT INFECTION OR TRANSMISSION means PREVENTS INFECTION AND TRANMISSION. But no. When they say it doesn't prevent infection or transmission, that's not code for IT PREVENTS INFECTION AND TRANSMISSION.
1 Reply
7
Reply Wed 1 Sep, 2021 11:32 am
@Glennn,
It's darkly hilarious that you vehemently refuse to recognize how the Covid vaccine provides significant protection against catching the disease and keep calling it "experimental" despite FDA approval and overwhelming evidence in hospitals across the country, but you are all about using an experimental treatment using parasite medicine to treat a deadly viral disease based on the flimsiest of anecdotal evidence.
2 Replies
Below viewing threshold (view)
-5
Reply Wed 1 Sep, 2021 03:50 pm
@engineer,
Quote:

. . . the Covid vaccine provides significant protection against catching the disease . . .

By all means, do provide something to validate that claim. Just cite the source, and we'll compare notes.

based on the flimsiest of anecdotal evidence.

Oh you're going to have to do better than that. Calling all those studies flimsy evidence doesn't make them go away; it just feels that way to you.

Now what part of any of those studies did you determine was flimsy?

You never did make clear what tony's recommended medical treatment for Covid was. Do you recall the details of his treatment protocol? Yes? No?
1 Reply
5
Reply Wed 1 Sep, 2021 04:07 pm 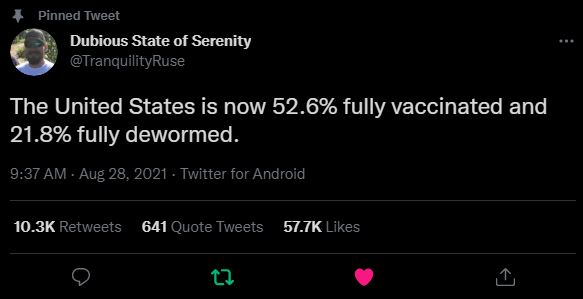 You never did make clear what tony's recommended medical treatment for Covid was. Do you recall the details of his treatment protocol? Yes? No?

It's a trick question. He recommended nothing. That was his proactive approach . . . contrary to the myth that he was all over this thing.

Since when did waiting for an experimental injection qualify as a treatment? That can't possibly be anyone's idea of a proactive approach, can it?
0 Replies
3
Reply Thu 2 Sep, 2021 07:55 am
Major meta review of all controlled Ivermectin trials covering ten trials, eight of which were on patients with mild symptoms, one moderate, one severe.

Results
Ten RCTs (n = 1173) were included. The controls were the standard of care in 5 RCTs and placebo in 5. COVID-19 disease severity was mild in 8 RCTs, moderate in 1, and mild and moderate in 1. IVM did not reduce all-cause mortality rates compared with controls (relative risk [RR], 0.37 [95% confidence interval, .12–1.13]; very low QoE) or LOS compared with controls (mean difference, 0.72 days [95% confidence interval, −.86 to 2.29 days]; very low QoE). AEs, SAEs, and viral clearance were similar between IVM and control groups (low QoE for all outcomes). Subgroups by severity of COVID-19 or RoB were mostly consistent with main analyses; all-cause mortality rates in 3 RCTs at high RoB were reduced with IVM.

Conclusions
Compared with the standard of care or placebo, IVM did not reduce all-cause mortality, LOS, or viral clearance in RCTs in patients with mostly mild COVID-19. IVM did not have an effect on AEs or SAEs and is not a viable option to treat patients with COVID-19.

Here's also a nice summary of how we got to where we are on IVM.
0 Replies
3
Reply Thu 2 Sep, 2021 07:59 am
My sister-in-law is a nurse near Charlotte. She told us her hospital is completely overwhelmed. The number of Covid cases are similar to the worst part of the pandemic earlier this year, but then they had cancelled all non-essential surgeries. They turned all that back on prior to the Delta variant and are not unable to handle the number of patients nor staff to the levels required.
0 Replies
2
Reply Thu 2 Sep, 2021 03:05 pm

It's darkly hilarious that you vehemently refuse to recognize how the Covid vaccine provides significant protection against catching the disease and keep calling it "experimental" despite FDA approval and overwhelming evidence in hospitals across the country, but you are all about using an experimental treatment using parasite medicine to treat a deadly viral disease based on the flimsiest of anecdotal evidence.


Take note he have been not addressing the question of whether he is vaccine or not so is he on one hand trying to talk others into not protecting themselves and turn instead to horse dewormer instead while being protect himself.

But why do you need even more oxygen in your H2O? Tampa Bay Water trucks in liquid oxygen, which it converts to gas, and then adds a spark of electricity to convert it to ozone. This is used in two separate facilities for two separate purposes, says Moore: At a surface-water treatment plant, the ozone kills nasties like bacteria and viruses, and at a different plant it breaks down hydrogen sulfide, a naturally occurring gas that smells like rotten eggs.

Oregon and Idaho have joined the list of U.S. states that are running out of I.C.U. beds as both confront a dramatic rise in new coronavirus infections.

The national Delta-driven surge has filled hospitals in many states. Only a handful have more than 30 percent of their overall I.C.U. beds still available, according to data from the Department of Health and Human Services, and many have less.

1 Reply
4
Reply Mon 6 Sep, 2021 08:52 am
@Walter Hinteler,
Another problem is the shortage of staff. Hundreds of beds shut down due to lack of trained ICU nurses all over the States. Here in Calgary, we have seen a huge surge in cases, with approx. 90% in hospital unvaccinated. We are back to a mask-mandate, early closings, limited number in public places, transit, etc.

It's the idiots who won't get vaccinated that are responsible; well, them and we opened too early. We have a large number of school children and teachers coming down with Covid requiring isolation of thousands. It's ridiculous and preventable.
1 Reply
2
Reply Mon 6 Sep, 2021 10:22 am
@Mame,
I know. I got the Pfizer shots and felt a big sense of relief. With this Delta thing, that sense is eroding every day.
1 Reply
5
Reply Mon 6 Sep, 2021 12:37 pm
@roger,
Alberta and Saskatchewan are the Texas of Canada. Right-wing, protesting, 'you can't tell me what to do' thinkers. Our two provinces have the lowest and slowest vaccination rates in the country. Churches went against the law (and one pastor was jailed) and held services for 300+ every single week throughout the lockdown. We are under these limitations, but the Provincial government has exempted three towns who are holding stampedes and rodeos. Makes no sense. I am getting really fed up with these people.
1 Reply
-3
Reply Mon 6 Sep, 2021 01:07 pm
@Mame,
Mame wrote:

I am getting really fed up with these people.

It was your politicizing of the vaccine that led to people not trusting it.

Although progressivism does have a long history of blaming its victims for its own misdeeds, so at least you are on familiar territory if nothing else.
0 Replies