Forums: Coronavirus
Email this Topic • Print this Page
1
Reply Thu 26 Aug, 2021 06:33 am
@hightor,
The Common Cold research centre has been going for a very long time.

Some people go there for a holiday, once a year.
0 Replies
1
Reply Thu 26 Aug, 2021 09:30 am
HOUSTON, Texas (KTRK) -- Ivermectin was developed to treat parasites in both humans and animals.

This story explains how and why a local doctor has used the human version on thousands of patients.
https://abc13.com/ivermectin-covid-treat-dr-joseph-varon-united-memorial-medical-center/10976044/
1 Reply
3
Reply Thu 26 Aug, 2021 10:15 am
@edgarblythe,
This is the problem with smart people, they assume even their wildest hypotheses are completely valid. Covid is not a parasite and this doctor is not presenting any science to explain why his treatment should be expected to work nor data supporting his claims. I work with a lot of science PhD's and get this a lot. They will throw out "interesting" hypotheses with lots of enthusiasm. Luckily the culture here is to ask them to explain how the hypothesis works in terms scientific principles. A lot of hypotheses die quickly in that light.
1 Reply
1
Reply Thu 26 Aug, 2021 11:04 am
@engineer,
He didn't say it is used as a specific cure of corona virus, but part of the protocol he uses. He claims to have seen some benefits in that capacity.
1 Reply
4
Reply Thu 26 Aug, 2021 01:45 pm
@edgarblythe,
True, but you would expect him to say before using a medicine off-label exactly why he thought the medicine would be beneficial, the specific mechanism. If he hasn't done this, then he's just throwing drugs at people. Then you would expect him to document and publish the results. Of course, this completely leaves out the unauthorized human experimentation he was conducting.
1 Reply
1
Reply Thu 26 Aug, 2021 01:52 pm
@engineer,
All I know he has done it with thousands of patients and you haven't. He says it helps in the treatment.
1 Reply
-3
Reply Thu 26 Aug, 2021 06:18 pm
@edgarblythe,
He's not the only doctor who used Ivermectin to good effect. They just don't want it here in the U.S.

Ivermectin is an effective treatment for COVID-19. The probability that an ineffective treatment generated results as positive as the 63 studies to date is estimated to be 1 in 1 trillion. As expected for an effective treatment, early treatment is more successful, with an estimated reduction of 72% in the effect measured using random effects meta-analysis (RR 0.28 [0.18-0.45]). 37% and 96% lower mortality is observed for early treatment and prophylaxis (RR 0.63 [0.38-1.04] and 0.04 [0.00-0.59]). Statistically significant improvements are seen for mortality, hospitalization, recovery, cases, and viral clearance. The consistency of positive results across a wide variety of heterogeneous studies is remarkable, with 92% of the 63 studies reporting positive effects (27 statistically significant in isolation). 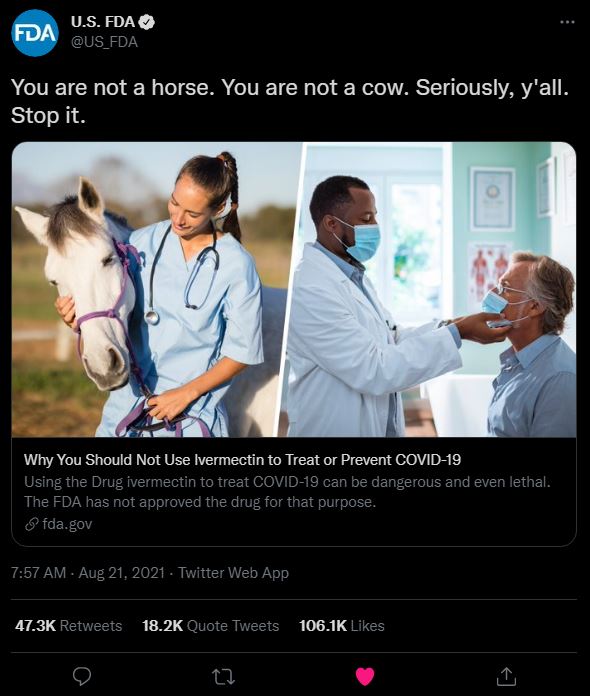 
1 Reply
-3
Reply Sat 28 Aug, 2021 07:15 am
@Region Philbis,
Did you read what I posted? You don't understand what you've just read, do you. Or, you do understand, but your faith in tony and the various monks at the medical-temples is such that even after they recommended a test (PCR) that does not differentiate between pathogens, and which was deliberately set at a cycle threshold that they themselves have stated would give meaningless results, you still keep the faith. Why?

You're willing to forgive them their direct lies and their lies of omission and continue looking to them for the truth of the matter. Do you have a delay-switch on your Liar-Detection-And-Response mechanism?

So, after looking over the studies at the link I've provided, are you going to still go on believing that the good doctors of the world who've used Ivermectin to good effect were getting the drug from the local Tractor Supply store, and are lying about their success. Is that the point you're trying to make?
0 Replies
1
Reply Sat 28 Aug, 2021 07:18 am
Despite anything I've posted I never have been approving of using the formula made for horses.
1 Reply
-4
Reply Sat 28 Aug, 2021 07:28 am
@edgarblythe,
They know that. They're just looking for a way to convince people to disregard a drug that works. Memes are all that's left to them. I could understand their condemnation of Ivermectin if they had stock in the experimental injections or something like that, but that's probably not the case.
1 Reply
2
Reply Tue 31 Aug, 2021 02:59 pm
@Glennn,
Well one nice thing about this horse drug is that it likely to shorten the lifespan of even more fools.

Love the fact that when such fools look at their waste they sometime think that they are discharging worms instead of parts of their intestinal wall.
0 Replies
-1
Reply Tue 31 Aug, 2021 05:14 pm
I wonder why they didn't go to a doctor for a prescription . . .
1 Reply
2
Reply Tue 31 Aug, 2021 05:34 pm
@Glennn,
theyd go to a vet. you can buy ivomec(brand name of Ivermectin) at tractor supply its in their drug fridge. itll get rid of yer worms and any ticks suckin blood on your ass.
1 Reply
-2
Reply Tue 31 Aug, 2021 08:27 pm
@farmerman,
First, let's make sure we understand what you're saying. Are you saying that no doctors have used Ivermectin to successfully treat Covid?

Hey, what was tony's recommended treatment for those who contracted Covid? I mean, he must have recommended something. What was it?
2 Replies
2
Reply Tue 31 Aug, 2021 08:52 pm
@Glennn,
Glennn wrote:

First, let's make sure we understand what you're saying. Are you saying that no doctors have used Ivermectin to successfully treat Covid?

Hey, what was tony's recommended treatment for those who contracted Covid? I mean, he must have recommended something. What was it?

Yeah, and so does my immune system. Have you heard what the survivability rate is?

Anyway, what did tony prescribe for those who contracted Covid? I think it was NOTHING; like: Go home and isolate yourself, and if it gets real bad and you're having trouble breathing, THEN get to the hospital. That was tony's prescription!!

Unfortunately, you're just another pro-experimental injection soul who has no idea how to reconcile your belief in its safety with all the injuries and deaths being reported to VAERS, and so you have to ignore it. And that's okay. You made a choice to do that.
1 Reply
3
Reply Wed 1 Sep, 2021 02:57 am
@Glennn,
I think Ivomec was used in prophylaxis for symptoms. Ive not read anything in the literature about it treating Covid successfully.

thats pretty much the point. the antivaxxers have lost the argument with the delta variant being mainly making the unvaxxed sick and dying
1 Reply
1
Reply Wed 1 Sep, 2021 04:09 am
@Glennn,
OK how about yourself are you or are you not vaccine or are you depending instead on a horse dewormer ????????