Forums: Coronavirus
Email this Topic • Print this Page
2
Reply Mon 9 Mar, 2020 01:44 pm
In Ireland all St Patricks Day parades have been cancelled. Most major sporting events are in doubt.

The government have just said that any people told to self isolate with a doctors cert will receive a non means tested payment of around 300 euros pw for the isolation period which i believe is just two weeks.
That's to take the pressure of employees and employers. Good move.

The latest official virus spread projection for Ireland is between 50 & 60% of the population will become infected. For 80 to 85% that will be nothing more than a bad cold or mild flu. The rest might need medical treatment of varying degrees. The death rate at the moment is hovering around 2%.

The major worry over here is for the elderly and those with preexisting conditions. Apparently it's very dangerous to cancer patients, even those in remission.

A lot of people are worried for their Grandparents. A major worry too are retirement homes where it could spread easily among the most vulnerable.
Look out Florida.

Tracking Every Coronavirus Case in the U.S.: Full Map
1 Reply
1
Reply Tue 10 Mar, 2020 07:53 am
Here in Rome, the nation-wide stay-at-home instructions are being followed, somewhat slowly. I read that if you go out you may be stopped by the police or army and will have to justify yourself. The justifiable reasons being srated as work, staple shopping, health checks (not covid related) and serious family urgencies... but then I went out and saw no cops. Groceries, pharmacies and tobacco shops remain open, a few bars and food outlets try and keep serving the neighborhood. Some (rare) folks are walking their dog, jogging, doing the groceries. People have to keep a 1 metre distance from one another.

A great calm surrounds us, tucked in our apartment at the heart of this otherwise busy city.
0 Replies
1
Reply Tue 10 Mar, 2020 11:56 pm
New York State Governor Andy Cuomo has shut down New Rochelle. He's declared a state of emergency!

I swear, the cameras must stop showing his face. The poor guy is the picture of TERRIFIED. That is not particularly good or helpful when it comes to reassuring the public.
1 Reply
1
Reply Wed 11 Mar, 2020 12:21 am
@Region Philbis,
Darn. Michigan just lit up on that map. It was virus free an hour or two ago.

It looks like Detroit and Detroit suburbs though. I'm nowhere near any city, much less Detroit. 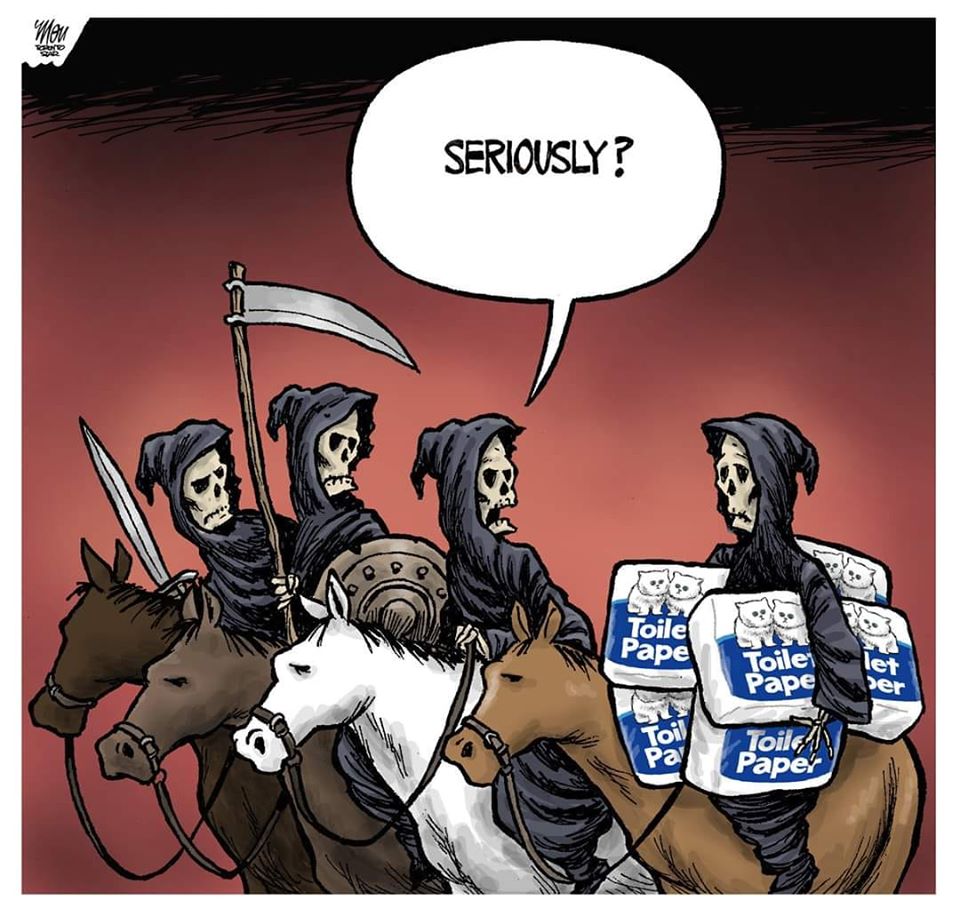 I moved from untamed wilderness to open farmland about a dozen years ago, but that's civilization enough for me.
0 Replies
1
Reply Thu 12 Mar, 2020 10:44 pm
New York State Governor Andrew Cuomo has issued an order that gatherings of more than 500 are not allowed.

Broadway shows tend to have more than 500 attendees and so, Broadway theater is shut down.

Jones made those claims on his March 7th episode of The Alex Jones Show and touted the products available for sale on his website. In addition to the Superblue toothpaste, Jones also claimed the DNA Force Plus supplements and Silversol products would also fight or cure the coronavirus, the letter said.

how else is he gonna recoup his bail money?
0 Replies
2
Reply Fri 13 Mar, 2020 12:48 pm
https://www.theatlantic.com/ideas/archive/2020/03/peter-wehner-trump-presidency-over/607969/?fbclid=IwAR0uGwWJMwHrA2Hg-wgWOnSXJmqd7VCIxMvy8TgXXq_VSu1Qa2EkSuAt60k
0 Replies
1
Reply Fri 13 Mar, 2020 02:22 pm
So yesterday France switched to a total closure of all schools. Data shows France is about 8 days behind Italy in terms of virus spread. It's a week the gocnvernment decided to use to try and slow down the beast. Meanwhile in Rome, the week end is going to see a full closure of all shops and restaurants. Streets are now mostly empty. Many people left the town. Those remaining are starting to get cookoo a bit.

In Libération, the Roman novelist Cristina Comencini found the right words to recount the daily life of a country in quarantine:

If we manage to survive, the problem in Italy will be whether couples, with or without children, and single women and men, will resist locking themselves up in their own house, if they will manage to stay together, to enjoy again the reciprocal company or the chosen solitude, after a forced and uninterrupted conviviality of a whole month. The government decree says that we can go out for a walk, but only with those who already live with us, not with friends, not even visits to relatives who live in other houses are allowed. Only close family, or nobody if we are alone. No cinemas, no theaters, no concerts, museums, restaurants, offices, schools, universities. Only one family member can go shopping. In front of the supermarkets, there are silent queues of people wearing the mask, each person must be 1 meter away from the other, waiting for someone to exit in order to enter in turn. Same thing in front of pharmacies. In the street, we swerve when we meet another passerby.

Many of us have thought of Boccaccio's Decameron. Around the year 1350, fleeing the plague, a group of young people, seven women and three men, take refuge outside the walls of Florence, and, to pass the time, tell each other stories, and substitute a world of imagination to the real world falling apart. Others reread the Plague of Albert Camus or the pages of the Betrothed by Alessandro Manzoni which describe another epidemic of plague, that of 1630, during which all the nobles who could do it fled Milan, as all the rich Milanese did these past days, as soon as the city had been classified a "red zone". As if we could flee without bringing damage to the places where we take refuge, or consider that the fate of the others is indifferent to us.

Journalists write that we should not complain, and remind us of what our parents suffered during the war. Others accuse young people of not respecting the rules because they go out on Saturday night, are not afraid, are young and think that the old are the only ones who will fall ill. An elderly Italian actor asked them if it was fair to kill all the grandfathers at the same time.

We would need a poet to come home to tell us stories, and to entertain our children. The Internet has never been more important .Online chats between friends, sisters, family members are very popular.Thousands of gifs and funny images about the virus, hilarious videos from old movies, were exchanged in the days before everything was closed. Now the atmosphere is heavier, we remain silent - with the order from the government: do not move! It sounds easy. In one of the funny posts that circulate, one reads: "It does not happen every day to save Italy by staying in pajamas."  We all laugh - but it is yellow laughter.

The moment of truth has arrived, for couples who do not stand one another, for those who say they love each other, those who have lived together for a lifetime, those who have loved each other for a short time, those who have chosen to live alone because of a taste for freedom or because they had no other choice, for children who no longer have school, for young people who want each other but cannot meet... We are all called to invent ourselves a new life, to feel close even if we are far away, to settle our accounts with a feeling that we avoid at all costs: boredom. And the slowness too, the silence, the empty hours - or full of children locked up at home, shouting. We have before us the life we ​​have chosen for ourselves, or that fate has given us, our "home" - not a disease but that life which we have built over the years. I would call this a test of truth. These days, what wins is also virtual life, since we cannot touch each other. Movies on TV, series, Netflix, Amazon, Google ... We spend even more hours in front of our computers, or heads leaning on our laptops.

But from time to time, we saturate, we can't take it anymore, we raise our heads and we discover lots of things.The son who was thought to be still a child has become a young man, and we didn't realize it; until he told us, smiling: "Now you have to stay with us, don't you?" We frantically clean the houses, we clean the fridge, we put the books in order - then we take a break, and we notice that in the courtyard the cherry tree is in bloom, we stay half an hour to look at it and one has the impression to see it for the first time. We compulsively send messages so as not to feel lonely, and a phone call can last half an hour, like when we were young and the times were not those of today, when we made love on the phone. It also happens that a friend says to you: "Maybe tomorrow we can go for a walk together, while staying at a distance, what do you think?" And the idea brings you a thrill of forbidden pleasure. We are living in different ways the moments of our life, and it seems new to us because it is the same but reversed: the objects, the people have become visible, and the habit has dissipated, "the stupefying habit, as Proust calls it, which hides almost the entire universe".

Dear cousins, I sincerely hope that this does not happen to you, or, if it should happen, that it is an experience not to be forgotten. Tomorrow, when the door of the house reopens, when we will run against time again to meet and touch fragments of things and people, and when dreams, and art, will be the one and only overturned part of our life, let us remember then that another layer can cover the days and reveal them in good as in evil - once the void, boredom and fear are overcome.

1 Reply
2
Reply Fri 13 Mar, 2020 05:36 pm
@Olivier5,
Good luck. Try to say safe.
1 Reply
2
Reply Sat 14 Mar, 2020 04:13 am
@oralloy,
Thanks. We feel quite priviledged because we live in a pretty large and cozy place. Staying in is less of a problem when you stay in a nice place. My wife is stressing but holding it together for the time being. I stress too but i also try to saok in these days of immense calm. Our hood is usually teaming with tourists and has some intense nightlife. Now it's some ghost town.

Yesterday night the neighbour put on what sounded like pretty load Italian opera on her terrace and started singing along and filmed herself on the cell. Another neighbour objected. She stopped after a short while. We thought 'the Romans are getting even crazier than usual..." but it was then revealed on TV that it was a facebook flashmob. Italians singing the national anthem on their balcony. I obviously need to pay more attention to Italian culture...

France is holding municipal elections tomorrow. They got a lot of gel and a minimum distance of 1m between folks... so that's something to watch. The second round is scheduled in 2 weeks, nobody knows how / if it will happen.

1 Reply
1
Reply Sat 14 Mar, 2020 10:30 am
@Olivier5,
As the New York Public Library’s magnificent 42nd Street reading room prepared to close temporarily because of the virus, regulars wondered when they would be back.

But for a certain kind of New Yorker, the news on Friday that the New York Public Library would be closing the soaring Rose Main Reading Room in its 42nd Street flagship — along with its 91 other locations — at least until April 1 caused a special kind of sadness and alarm.

Dr. Sanjay Gupta: The U.S. Failed To Have Coronavirus Tests Ready For The Public

I had already decided to skip it in theaters and watch it at home. But maybe by November it will be safe to venture out to theaters again.


LOL how dare you risk going out at least in flu season ever again.
1 Reply