Forums: Polls, Culture, Society, Technology, Trends
Email this Topic • Print this Page
1
Reply Wed 5 Feb, 2020 08:29 pm
@Rebelofnj,
Then I misread the article at your link. I didn't see anything in it about computerization and/or digitalization when I looked at it.

An automatic parking system uses various methods to detect objects around the vehicle. Sensors installed on the front and rear bumpers can act as both a transmitter and a receiver. These sensors emit a signal that will be reflected back when it encounters an obstacle near the vehicle. Then, the car will use the time of flight to determine the position of the obstacle. Other systems use cameras, e.g. Omniview technology, or radars to detect obstacles and measure the parking space size and distance from the roadside.

And here is the article for Toyota's parking system. https://en.m.wikipedia.org/wiki/Intelligent_Parking_Assist_System

The IPAS/APGS use computer processors which are tied to the vehicle's sonar warning system feature, backup camera, and two additional forward sensors on the front side fenders.

I too have a multipurpose printer, and I had to fax documents every now and then.
0 Replies
1
Reply Tue 11 Feb, 2020 11:17 am
@JGoldman10,
I am disappointed that 21-century tech got much further away than I could have possibly had imagined in the early '80s...I was young and naive about how disruptive tech can be and just how dangerous beyond my wildest child dreams it could get.
Flying cars don't scare me nor do seem advanced to me...having a base on the Moon could have been done ages ago but there was no political will.
The tech I have right now is enough to drive me mad, starting with social media.
5 Replies
1
Reply Tue 11 Feb, 2020 12:59 pm
@Fil Albuquerque,
I think digital tech will evolve to the point that it can be controlled telepathically; i.e., by reading neural impulses in one's brain.
0 Replies
1
Reply Tue 11 Feb, 2020 01:01 pm
@Fil Albuquerque,
In the 1970's people said in the future we'll have flying cars.
Fast forward to the 21st century - we have silly cat videos.

0 Replies
1
Reply Tue 11 Feb, 2020 01:12 pm
@Fil Albuquerque,
I didn't think most public payphones would be recalled. I thought most if not all be computerized or digitalized.

I recall being stranded somewhere and seeing a computerized payphone that required you to have a credit card in order to use it.

Why were most payphones recalled? Was it because phone companies considered them obsolete or because people were vandalizing them?
4 Replies
1
Reply Tue 11 Feb, 2020 01:19 pm
@Fil Albuquerque,
Did you think tech was going to be hyperdigital like it was portrayed in futuristic movies when you were a kid?

Some current movies portray futuristic tech this way. I've seen some movie in which someone was pulling virtual or holographic windows out of thin air and performing certain operations on them via touch.

I'm guessing that fascination was fueled by the Space Race between The United States and Soviet Russia during the 1950s to the 1970s.

I didn't think most public payphones would be recalled. I thought most if not all would be computerized or digitalized.

According to Google, apparently digitality means "the condition of living in a digital culture", so I'm guessing hyperdigitality is a more extensive version.
https://en.wikipedia.org/wiki/Digitality

According to Wikipedia, the idea mainly originated in the 1990s, long after the Space Race, and during the rise of digital communications and the abandonment of analog devices.
1 Reply
1
Reply Tue 11 Feb, 2020 01:46 pm
@JGoldman10,
One reason was that people started using cell phones more, and payphones were becoming expensive to maintain as no one was using them and making collect calls.

Not exactly difficult to figure out.
0 Replies
1
Reply Tue 11 Feb, 2020 01:47 pm
@JGoldman10,
Over here public phones were disused, some have been repurposed.

There is a public phone near where I live, but I live in the city, and I've not seen any in the countryside.

This is from a very lovely village in Dorset that I sometimes drive through. 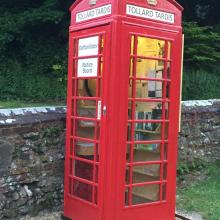 It's been repurposed as a defibrillator.

This one is a library.

Yes, I meant hyperdigitality to mean a more extensive version of the condition of living in a digital culture. I assumed hyperdigitality and superdigitality in this context meant the same thing.
0 Replies
1
Reply Tue 11 Feb, 2020 11:11 pm
@Fil Albuquerque,
I am glad the Russians are NOT building "space billboards", which I discussed in another thread.
1 Reply
1
Reply Wed 12 Feb, 2020 02:02 am
@JGoldman10,
Because it's so much better that Putin's undermining NATO, establishing a large presence in the ME and telling your poodle president what to do.
1 Reply
1
Reply Wed 12 Feb, 2020 03:03 am
@JGoldman10,
Public payphones could have been refurbished as cellphone electric and credit chargers at least in the beginning. Now is far too late. You could still make something multitasking out of them especially in some remote places.

As for holographic interfaces as they are presented in the movies they are far too big they clutter all the visual area with augmented Reality stuff, they are heavy on your harms after a while instead of on your fingers, and they would probably spend too much energy aside off totally losing a sense of touch.
If they ever come they will be a geek gizmo that will never catch on.

As for "hyper-digital", we got that from monkeys way back.
0 Replies