Forums: Politics, Iraq, International, Anti War Demonstrations
Email this Topic • Print this Page
1
Reply Sun 16 Feb, 2003 11:31 am
Looks like LA has gone to the "Dogs" too!

There are 10 million NYCity residents. At the parade, there were 3000 participants with their signs.

If you cannot be honest to yourself, at least don't be dishonest to us.

On a wintry day in New York, huge crowds, prohibited by a court order from marching, rallied within sight of the United Nations amid heavy security. They raised banners of patriotism and dissent, sounded the hymns of a broad new antiwar movement and heard speakers denounce what they called President Bush's rush to war, while offering no sympathy for Iraq's dictator, Saddam Hussein.

"The World Says No to War," proclaimed a huge banner over a stage on First Avenue near 51st Street, the focal point of crowds that filled the avenue from 49th Street to 72nd Street and spilled over into side streets and to Second, Third and Lexington Avenues, where thousands more were halted at police barricades, far from the sights and sounds of the demonstration.

Crowd estimates are often little more than politically tinged guesses. The police commissioner, Raymond W. Kelly, put the crowd at about 100,000, while the organizers said 400,000 people attended. Given the sea of faces extending more than a mile up First Avenue and the ancillary crowds that were prevented from joining them, it seemed that something in between was probable. 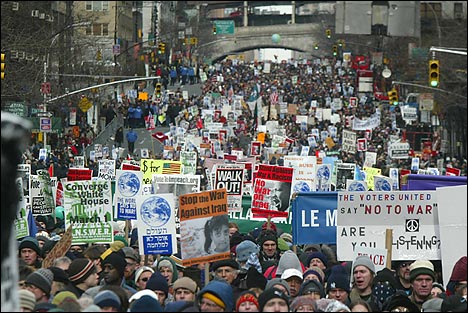 Thank you for broadening my horizons. My day is now complete.


Thank you for your PM. Sorry to say, I deleted it, because I never read PMs .

There are clearly more people who stayed at home - we'll never really know which side of this debate they're on - but KUDOS and applause to those who publicly stand up for their opinions.

Stand up and be counted really means something in cases like this.
0 Replies
1
Reply Sun 16 Feb, 2003 12:44 pm
For sure ebeth
0 Replies
1
Reply Sun 16 Feb, 2003 02:03 pm
There is a popular misconception that anyone who voices disquiet about the potential war in Iraq, is a pacifist or liberal, it is actually possible to be different from the stereotype.

I thought these links may help to dispell the belief that all people who speak out against the Iraqi adventure, are joint smoking liberals.

I hope these links work....

The first one is based on an article that appeared in The Times (UK), and contains the views of retired General Michael Rose. Far from being a stereotypical serial liberal peace rally attender, he is a highly respected army officer, who recently retired, and is therefore free to express his views in public.

He has pretty good credentials. While in the army, he was the head of UN peacekeeping forces in Kosovo. Prior to that, he was also the commander of the British Special Air Service (SAS). The SAS is probably the world's elite special forces regiment, and is the model for the US Delta Force. To help clarify, the SAS were amongst the first land troops into Afghanistan (Covertly of course, prior to the start of hostilities), and were also the guys who developed and taught their Yank cousins, the technique for clearing caves of Taliban. I simply use that as an example, to help explain the General's type of military background. If someone with SAS experience feels something is a bad idea, people should be concerned and listen to what he's saying.

As eloquent as nimh's reply was this:
Quote:

It is PRECISELY at his instigation, and no one else's, that this war is transpiring.

Hussein has thumbed his nose at the UN for as long as he has been in power, the decision to address his refusal to play by the world's rules is as a result of HIS actions, and no one else's.

You are making two reproaches to Hussein, I think, and that's confusing the issue a bit. The first is that he is instigating war. There's no evidence of that at all. Nothing in Saddam Hussein's behavior since Kuwait has indicated he was going to start any imminent war. Everything in George Bush's policy of the last few months, on the other hand, indicates a determination to war.

The second reproach would justify Bush's rush to war - that Hussein "thumbed his nose at the UN", "his refusal to play by the world's rules". Because that he did so to some extent is undoubtedly true. Every instance of his trying to stretch the limits of what he could get away with, in resisting further disarming and further limitations to his room to manoevre, shows so. I don't think keeping a rocket in store that goes just beyond what the international treaty prescribes comes down to instigating war - in that case most every dictatorship in the world and quite a few democracies would be "instigating a war" at this very moment - but it sure is "refusing to play by the world's rules".

But consistency is consistency. This reproach has Hussein offending "the UN" and "the world". Doesn't that leave it up to the UN resp. the world to decide on whether this is the case and on what the appropriate action should be? At the moment, neither the UN observers nor a majority of the UN Security Council nor, for that matter, much of the rest of "the world" (whether counted by government or by population) seems convinced that Hussein has "thumbed his nose" at them to any extent enough to justify a massive build-up to war. So in your reply you actually confirm the very thing I referred to in my Lenin analogy: we, the US, think that Hussein has thumbed his nose at the UN and the world long enough, so we are going to start a war against him no matter whether that UN and that world wants us to or not.
0 Replies
1
Reply Sun 16 Feb, 2003 02:55 pm
The fact that former head of UN Weapons Inspection Team in
Iraq, and self-described republican, Scott Ritter is opposing the war indicates that even conservatives know this war is unjust.

Hussein can stop the war from ever happening.

All he has to do is come clean with banned weapons, or prove that they have been destroyed.

He refuses to do so.
Continually refuses, and additional time or inspections will have no effect on the fact that he is flagrantly in violation.
It is he, and he alone, who can stop the movement towards war.

His refusal to do so carries with it consequences.

And those consequences are upon him, and him alone.

Oh, and I don't think we want to be using Scott Ritter as a proof source these days.

"Judge a man by his questions rather than by his answers."

It seems you have a lot more answers than questions, Max.
0 Replies
1
Reply Sun 16 Feb, 2003 05:16 pm
The point of this thread was to share information about the rallies, world-wide. I don't wish to be rude to fellow A2K-ers, but would the supporters of a war in Iraq please direct their comments elsewhere at A2K & you can happily have your debate there. This is not the place for the debate you want to have.
0 Replies
1
Reply Sun 16 Feb, 2003 05:17 pm
maxsdadeo, did you actually read nimh's post? Your response doesn't seem to have a lot to do with it.

Refusing to stop a possible war is not the same as instigating it. One is reactive. The other is proactive.
0 Replies