Here is an interesting article about why these comparisons do not make sense -- the comparisons of US murder rates and so forth - basically saying how these stats and comparisons are biased.

Comparing our murder rates to impoverished nations with sky high murder rates doesn't make sense. Do we compare our life expectancy to countries where people see a doctor only a few times in their life?

So yes, our murder rate is moderate compared to most countries, because most countries are poverty stricken, as of this writing. But we compare every other aspect of our standard of living to the other fortunate developed countries, so to break ranks and start comparing ourselves to impoverished Third World nations would be showing bias.

As for diversity, it is true the diverse US will probably always have a somewhat higher rate of violence than homogenous nations where only one type of people have lived their since the Ice Ages. Not all of our newly arrived groups get along with each other. But countries like France and the UK also have a lot of immigrants from poor countries, they too are diverse, and their murder rates are about a quarter of the US rates. So it isn't just diversity that causes the problem. 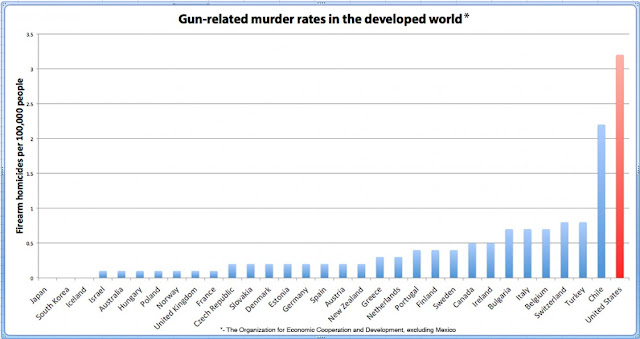 Unfortunately for the article, the comparison of the US to other wealthy, developed countries does make sense.

Perhaps, but that is not what is being done.

Regardless of the method of fraud though, fraudulent statistics are worthless as a way of determining the truth.
1 Reply
4
Reply Mon 9 May, 2016 10:19 pm
@oralloy,
Actually, I think they have done a pretty good job. The only objection the critic had was leaving Mexico off the list because they have a drug war going on. The article snidely said the US should be left off the list, but in the US the drug crime is not so great that sheriffs in small towns are simply leaving their job because they are afraid of being shot by the drug gangs. That happens in Mexico.

Actually, I think they have done a pretty good job.

Every one of these studies uses one of the two versions of fraud that I detailed in my previous post. Fraudulent data has no value.
1 Reply
3
Reply Mon 9 May, 2016 11:54 pm
@oralloy,
I actually agree that gun homicides is less useful than simply listing homicides. But Mexico is still in a state of drug war, so excluding Mexico still makes sense. Mexico has a murder rate of 18.9 per 100,000 inhabitants, and it's overall quality of life is number 71, which would make it questionable to consider it an advanced country.

The US is listed #102 for overall homicides, but our homicide rate is erroneously listed as 3.8 per 100,000 inhabitants, when it actually is 4.5. We should be listed #116. You have to admit, that's pretty pathetic.

We have violent neighborhoods where life is much more like the conditions in an impoverished country. Most of the homicides are in those neighborhoods.

Notice how France's relatively high rate of private gun ownership does not lead to a dramatically increased homicide rate?

So guns clearly are making the difference in the US.

There is no evidence that guns are the cause of the difference in the US.

Taiwan has very few private guns, and the last time I saw their numbers they had a homicide rate higher than the US.

Switzerland has lots of privately-owned guns, and their homicide rate is fairly low.

It wasn't too long ago that people could freely buy and own machine guns in Switzerland, and their homicide rate was fairly low then as well.
2 Replies
5
Reply Tue 10 May, 2016 02:14 am
@oralloy,
oralloy wrote:

Notice how France's relatively high rate of private gun ownership does not lead to a dramatically increased homicide rate?


You certainly are aware that France has one of the toughest gun control countries in the world?
Germany, btw, has the Germany, has the fourth highest per capita rate of gun-ownership in the world, behind the U.S., Switzerland, and Finland.

And Switzerland ... ... Although not a member of the EU, Switzerland’s participation in the Schengen Agreement - which allows for passport-free travel within its 26 signatories – obliges it to carry out any reforms to EU gun law. Thus, for instance, the number of Swiss keeping their army-issue rifle or pistol after military service has dropped by three quarters in ten years.
2 Replies
-3
Reply Tue 10 May, 2016 03:33 am
@Walter Hinteler,
Walter Hinteler wrote:

You certainly are aware that France has one of the toughest gun control countries in the world?

Apparently not strict enough to prevent a fairly large number of Frenchmen from owning firearms.

Germany, btw, has the Germany, has the fourth highest per capita rate of gun-ownership in the world, behind the U.S., Switzerland, and Finland.

And Switzerland ... ... Although not a member of the EU, Switzerland’s participation in the Schengen Agreement - which allows for passport-free travel within its 26 signatories – obliges it to carry out any reforms to EU gun law. Thus, for instance, the number of Swiss keeping their army-issue rifle or pistol after military service has dropped by three quarters in ten years.

But I confess that I don't have a large amount of information about French law, so I guess it is possible.

It seems odd though, if it is the case.
1 Reply
2
Reply Tue 10 May, 2016 05:20 am
@Blickers,
Not all the countries mentioned in the article are poverty-stricken . Also the US has many poverty-stricken areas of the country. The point the article was making was it isn't so cut and dry to compare the US to just a select pickings of other countries.

I would think education comparisons should also follow suit. It is tough to compare countries in general that have different cultures and different demographics of any kind.

There could be a million other reasons impacting what causes the murder rate in one country to be different than another. You can guess but you can not come up with a strong conclusion unless all other variables are equal.
1 Reply
2
Reply Tue 10 May, 2016 05:24 am
@Blickers,
Actually that is not true. The writer used Mexico as an example sand stated it might be a better comparison, in part because of drug gangs in the US.

The point of the article is that income level isn't the only indicator for comparison not that Mexico should be included. He listed several other countries he thought should be included.
0 Replies
4
Reply Tue 10 May, 2016 05:28 am
@oralloy,
oralloy wrote:

Is there some EU regulation that now prevents them from keeping their former service weapons?

That aren't "former service weapons" but actually "Swiss army rifles" (= owned by the Swiss Armed Forces).
They have them legally at home, but the private use of those semi-automatic weapons in negotiation.

Correct. Thanks to our weapon laws ...

1 Reply
1
Reply Tue 10 May, 2016 05:30 am
@Blickers,
There were other reasons also that the countries you mention have greater differences than the US than diversity . ..still the US is much more diverse than France and England. It was one reason he gave of several.

You writing kind of like the article states these stats are done...just picking and choosing what works to fit the results you want.

A more clear picture is to take all countries where you have good stats and compare. Then see what may be the differences and similarities between groupings. That would give a clearer picture.

That is if you really want to learn something about the the stats.
1 Reply
2
Reply Tue 10 May, 2016 05:38 am
@oralloy,
I don't know the detail but ammos are regulated. You can't find them in supermarkets either.

The cultural dimmension is also important. In France, owning a gun (other than a hunting riffle if you hunt) is considered slightly wacko. It's for the paranoids.
2 Replies
3
Reply Tue 10 May, 2016 06:10 am
@Olivier5,
Olivier5 wrote:

I don't know the detail but ammos are regulated. You can't find them in supermarkets either.


You need the licence for the weapon the munition is thought for.
Besides that, the amount is regulated ... LE CLASSEMENT ET LES REGLES D’ACQUISITION ET DE DETENTION DES MUNITIONS

Guns have gotten into this culture in a big way. Killings like this will continue until we make legislation to get guns out of the everyday life of so many Americans.

The Second Amendment of the United States Constitution reads: "A well regulated Militia, being necessary to the security of a free State, the right of the people to keep and bear Arms, shall not be infringed."

What is a Militia?

Therefore, the PEOPLE have the right to bear arms so they can FORM a militia when necessary. The right shall not be infringed presumes the right preexists.

So it has nothing to do with hunting.

The States have the right to legislate gun ownership as they should. So the problem has been enforcement of existing gun laws by the States. With rights comes responsibilities and GUN OWNERS have a responsibility. Law enforcement also have a duty to enforce.

0 Replies
2
Reply Tue 10 May, 2016 06:26 am
@Walter Hinteler,
Thanks. So the current quota is 1000 rounds max per year (and at any moment), if you legally own the corresponding gun.
0 Replies
2
Reply Tue 10 May, 2016 06:26 am
@Olivier5,
What about Italy, you said you lived there. I wish I was world traveler. The food network has a few shows there and it always looks so pretty. I guess I still have a picture in my mind of the way it looks in Godfather II.

Our cultural has always considered guns a right, I guess because most people coming to this country back then seemed to be fleeing something from somewhere. (Except for the slaves, they were brought over in chains like animals...) I watch a lot of movies, anyway, like Bill Murray said, "Our forefathers were kicked out of every decent country in the world..."
3 Replies