Sanders Being Harassed by blacklivesmatter#

Forums: Politics, Racism, American Politics, U S Politics, Bernie Sanders
Email this Topic • Print this Page
2
Reply Sun 9 Aug, 2015 12:46 pm
@hawkeye10,
hawkeye,
I was gratified we were sort of in agreement there for a while. It was kind of a first. But as per usual, you have gone WAY afield of trying to keep the discussion productive, off into the land of 'hawkeye issues'.
1 Reply
0
Reply Sun 9 Aug, 2015 12:47 pm
@snood,
snood wrote:

I think its barely possible that they may not have targeted Hillary yet because she appears in public very sparingly. As I said, Sanders has momentum and they may have been trying to take advantage of that.


Yes Snood, this is a good explanation. But it is a little sad (at least in the short term). In a sane world, it should be helpful for any politician to make him or herself accessible to the public. Candidates shouldn't be penalized for this.

hawkeye,
I was gratified we were sort of in agreement there for a while. It was kind of a first. But as per usual, you have gone WAY afield of trying to keep the discussion productive, off into the land of 'hawkeye issues'.


The most productive result of these kinds of conversations would be a consensus that we all need to let others speak their minds, that we no longer support shouting people off the stage or like we saw here confiscating the mic. I reject your assertion, I am simply hunting for bigger game than you are, this is a lot bigger than Bernie Sanders or what Hillary's people knew or did.
1 Reply
3
Reply Sun 9 Aug, 2015 12:53 pm
@hawkeye10,
hawkeye10 wrote:

hawkeye,
I was gratified we were sort of in agreement there for a while. It was kind of a first. But as per usual, you have gone WAY afield of trying to keep the discussion productive, off into the land of 'hawkeye issues'.


The most productive result of these kinds of conversations would be a consensus that we all need to let others speak their minds, that we no longer support shouting people off the stage or like we saw here confiscating the mic. I reject your assertion.

I have him on ignore, works wonderfully well.


I've had him on ignore for years and only took him off temporarily because it appeared as if he was trying to play nice. He can't do it though. Gotta try to turn everything into some kind of personally -tinged harangue.
1 Reply
-2
Reply Sun 9 Aug, 2015 02:26 pm
@snood,
Quote:

because it appeared as if he was trying to play nice

I am not trying to play nice or not nice, I am trying to make reasonable rational points and trying to learn from others. Disturbing your peace is not something that I care about.

In this case my points have not been refuted, so I have to assume that we are all in agreement that I am right.

I dont agree with the ignore function, and I have over the years been vocal about that, but I do have to admit that it cuts down on the responses from the hopelessly close minded and/or intolerant, and these are not the quality of people that I am looking to have a conversation with....it is not a total loss .
1 Reply
-1
Reply Sun 9 Aug, 2015 11:44 pm
@hawkeye10,
Quote:

Why Sanders? Because he is a soft target, with little if any security at his rallies and not inclined to call the cops on protestors. So he suffers disproportionately for the sins of the larger system. Is this fair? Not exactly. On the other hand it seems to be working.

Sanders has put out an excellent statement on criminal justice reform, which is far stronger than anything else out there from a mainstream candidate.

Even though these tactics are not pretty, we can expect the entire Democratic field to give more attention to issues of structural racism.

Oh ya, the ever popular " the ends justify the means" argument. And we have the gall to wonder why civility seems to be breaking down.

Unlike BLM, which is all about citizen energy, all the Donald has to do is write a check and he is in it for the long haul. That's the Republican way.

Here's what I would love even more: for the Sanders campaign and BLM nationally to sit down and talk about an agenda on racial justice that he can use his presidential platform to help move. Imagine rolling out that agenda and inviting black people to talk about it on stage with him.

Yes to that. It's undemocratic to stop candidates from speaking, and it's counter-productive to undermine the candidate closest to what BLM stands for. There got to be a better way to attract attention to this issue.
1 Reply
-1
Reply Mon 10 Aug, 2015 12:41 am
@Olivier5,
Point of order: are you aware that over the last few years there have been surveys saying that whites are tired of hearing from blacks the black victim story every single ******* time the blacks get called to account....for anything?

I am overstating a bit as is my way, but you will I am sure understand the importance of my reminder.
0 Replies
2
Reply Mon 10 Aug, 2015 04:30 am
"I had a Sarah Palin button on backpack" Who is BLMS's Marissa "Johnson" Jenae?

It's said that if you decide to act above reproach, you had better be above reproach. It seems that Marissa "Johnson" Jenae did not heed this warning. A photo posted by Jenae to her FB page (Linked) in which she stated "This woman has known me since high school, back when I had a Sarah Palin button on backpack....we been thru a lot."

Alone, we can surmise that she may have made a few questionable choices in her youth. OK, she was young, but Palin was a candidate for VP running against the first black president. But when I read down a little further, my benefit of the doubt limit had been reached.

"GOP shoulda groomed me right then...now they gotta see me on the other side *shrugs*"

For real? It's like that? This wasn't 8 years, or even 4 years ago. She posted that last month. So my question is, what kinda grooming would it have taken?

If you're going to accuse white liberals of racism, and target the only presidential candidate, U.S. Senator Bernie Sanders with a 40 year track record of standing up for #BlackLivesMatter you might not want people to know that "I had a Sarah Palin button on my backpack" or admit that the GOP could have "groomed you more". Because now you look disingenuous at best, and an agent provocateur at worse.#FeelTheBern #BlackLivesMatter2Bernie #SarahPalinButtonReally #BLMjoinBernie #NativeAmericanLivesMatter #Ismellcointelpro

Linked collage will not embed, so you can cop&paste this to access it. 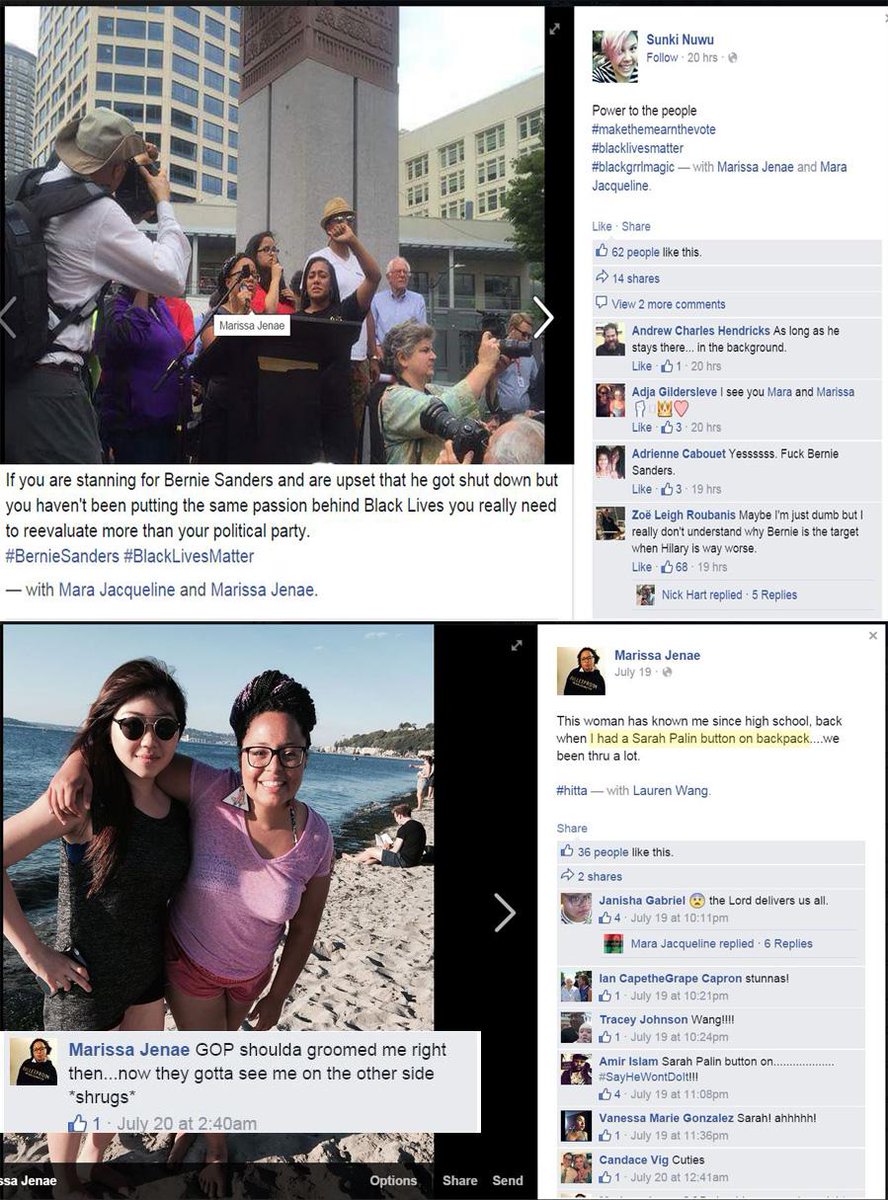 Johnson and Willaford are the women who interrupted Bernie Sanders' speech during a social security rally in Seattle and accused the audience of "white supremacist liberalism."

#BlackLivesMatter activists believe that this type of behavior is inappropriate and counterproductive, and we will not support it.

5 hours ago
2,500 supporters
12 hours ago
Petition update
Please help get this petition into the news!
We've reached 1,000 signatures! Please share or re-tweet this to national news organizations, so that Johnson and Willaford will know that activists from #BlackLivesMatter are demanding a public apology to Bernie...
13 hours ago
1,000 supporters
1 Reply
2
Reply Mon 10 Aug, 2015 08:00 am
@bobsal u1553115,
Good, I hope the petition works and they do it and Bernie Sanders is invited to another such place to speak and he accepts and the audience is filled with people from all walks of life. He really does have good ideas and is supportive of changes in the justice system.
0 Replies
1
Reply Mon 10 Aug, 2015 03:31 pm
@glitterbag,
glitterbag wrote: