http://www.thedailybeast.com/cheats/2015/03/13/nypd-edited-eric-garner-wikipedia-page.html
1 Reply
1
Reply Fri 13 Mar, 2015 06:32 pm
@ossobuco,
Despicable practice, but Wikipedia can deal with that. They have the tools. Each edit is carefully documented and they have 'super-editors' that can freeze pages in case of editor wars.

They are entitled to the despicable practice of manipulating the truth, from what I can tell.

Sure thing. Anybody who kills any one without reason deserves long years behind bars, or death, in the gravest cases. I hope Eric Garner's murderer pays for his crime. How is that for a simple standard?

Do you have any plausible case that this was in any way a murder?

The evidence seems pretty clear that it was a tragic accident.
0 Replies
2
Reply Sat 11 Jul, 2015 08:18 am
Found this pretty convincing... A long read for sure. I particularly liked the personal stories, like what he says about kids in the park (not quoted below -- click the link, it's worth it).

For the past couple of years the summers, like hurricanes, have had names. Not single names like Katrina or Floyd – but full names like Trayvon Martin or Michael Brown. Like hurricanes, their arrival was both predictable and predicted, and yet somehow, when they landed, the effect was still shocking.

We do not yet know the name that will be attached to this particular season. He is still out there, playing Call of Duty, finding a way to feed his family or working to pay off his student loans. He (and it probably will be a he) has no idea that his days are numbered; and we have no idea what the number of those days will be.

The precise alchemy that makes one particular death politically totemic while others go unmourned beyond their families and communities is not quite clear. Video helps, but is not essential. Some footage of cops rolling up like death squads and effectively executing people who posed no real threat has barely pricked the popular imagination. When the authorities fail to heed community outrage, or substantively investigate, let alone discipline, the police, the situation can become explosive. An underlying, ongoing tension between authorities and those being policed has been a factor in some cases. So, we do not know quite why his death will capture the political imagination in a way that others will not.

But we do know, with gruesome certainty, that his number will come up – that one day he will be slain in cold blood by a policeman (once again it probably will be a man) who is supposed to protect him and his community. We know this because it is statistically inevitable and has historical precedent. We know this because we have seen it happen again and again. We know this because this is not just how America works; it is how America was built. Like a hurricane, we know it is coming – we just do not yet know where or when or how much damage it will do.

Summer is riot season. It’s when Watts, Newark and Detroit erupted in violence in the 1960s, sparked by callous policing. It’s when school is out, pool parties are on and domestic life, particularly in urban centres, is turned inside-out: from the living room to the stoop, from the couch to the street. It’s when tempers get short and resentments bubble up like molten asphalt. It’s when, to paraphrase Langston Hughes, deferred dreams explode.

This is not my desire; it is my prediction. You can feel it building with every new Facebook post, viral video and Twitter storm. You can hear it from conversations with strangers at post offices, liquor stores and coffee shops. It is an unpleasant prediction to make because, ultimately, these riots highlight a problem they cannot, in themselves, solve; and it is an easy one to make because, as one bystander in Baltimore put it when disturbances flared there earlier this year: “You can only put so much into a pressure cooker before it pop.”

This is the summer I will leave America, after 12 years as a foreign correspondent, and return to London. My decision to come back to Britain was prompted by banal, personal factors that have nothing to do with current events; if my aim was to escape aggressive policing and racial disadvantage, I would not be heading to Hackney.

But while the events of the last few years did not prompt the decision to come back, they do make me relieved that the decision had already been made. It is why I have not once had second thoughts. If I had to pick a summer to leave, this would be the one. Another season of black parents grieving, police chiefs explaining and clueless anchors opining. Another season when America has to be reminded that black lives matter because black deaths at the hands of the state have been accepted as routine for so long. A summer ripe for rage. [...]

The Counted : People killed by police in the US

An interactive database from the Guardian. 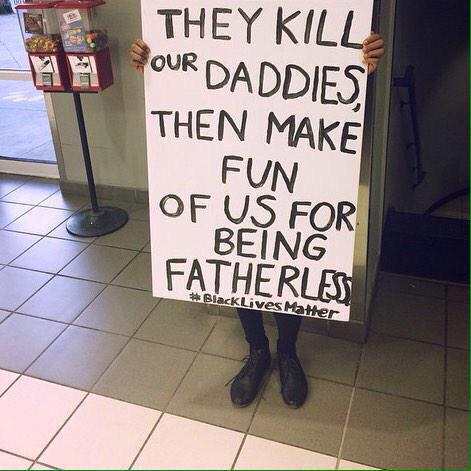 He was not murdered. Using that word to describe his death is bogus and telling.

No way you can watch the video and say it wasn't a choke hold.

Since the last time I replied to this post, I've learned a bit more about the issue due to the details contained in various articles written about the case over the years.

at 1:21 the cop in back applies his arm around Garners neck. At 1:25 he jerks Garner backwards, by his neck and takes him to the ground despite three other cops being there.

That is not a choke hold. That is a "seat belt maneuver" that the NYPD trains their cops to actively use.

His arm is indeed around the neck for a few seconds, but that can easily be the result of just trying to hang on as Garner bucks and tries to throw him off his back.

At 1:39 he stops the hold and kneels on the side of Garners head.

I thought the autopsy said that there were multiple factors including prone positioning and compression of the chest.
1 Reply
3
Reply Fri 2 Aug, 2019 06:51 pm
@oralloy,
So, let me ask you,

is the punishment for selling un-taxed cigarettes death?

Because that's all Mr. Garner was doing. And he was killed because if it. Seems like an unjust punishment to me.
1 Reply