Bill Cosby accused of Rape - say it ain't so

Bill Cosby is out of options. The fallen comedy icon will have to face his day in court for felony sexual assault charges, despite his legal team's best efforts to have them dismissed.

A Pennsylvania judge presiding over the case ruled late Wednesday that the trial, over charges brought on by former Temple University employee Andrea Constand, will move forward. Cosby allegedly raped Constand back in 2004, and she sued him for sexual misconduct in 2005 after the Pennsylvania district attorney at the time, Bruce Castor, refused to pursue criminal charges against the sitcom star.

Cosby's defense team claimed this week that Castor assured Cosby that he would never face prosecution for these specific charges if he agreed to give a deposition in Constand's civil suit. Ironically, it's that very deposition that escalated the call for criminal charges against Cosby, after he admitted to using quaaludes to drug women.

The judge in this new case isn't buying Cosby's claims of immunity, and insists that the trial move forward. The judge also filed an order compelling Cosby to answer questions about the incident with Constand after his lawyers refused to allow him to speak on it. A preliminary hearing is scheduled for March 8.

Thanks for the up-date bobsal.
1 Reply
1
Reply Wed 24 Feb, 2016 03:09 pm
@FOUND SOUL,
I really loved the guy coming up, there weren't that many black comics: Godfrey Cambridge, Dick Gregory and Bill Cosby. Redd Foxx if you had a friend with access to "party albums".

I just feel there needs to be justice regardless of his settlements. He broke his agreements, he broke the seal on his settlements. He just needs to admit: he really, really did some awful things.
1 Reply
2
Reply Wed 24 Feb, 2016 03:31 pm
http://www.theguardian.com/world/2016/feb/22/camille-cosby-bill-answer-questions-under-oath-about-accused-husband

Camille Cosby, who has stood by her husband Bill Cosby despite the dozens of sexual assault allegations against him, answered questions under oath on Monday in a defamation lawsuit filed against him by seven accusers.

Camille Cosby was questioned by a lawyer for the women at the Springfield Marriott, despite attempts by the couple to get the deposition postponed. It was believed to be the first deposition Camille Cosby has given since dozens of women went public with allegations of sexual misconduct against her husband.


Lawyers for the Cosbys have argued that she does not have any information on the accuracy of the women’s claims and that her conversations with her husband are confidential under the Massachusetts marital disqualification rule. They attempted to quash the deposition.

A judge ruled on Friday that the deposition must proceed. However, defense lawyers filed an emergency motion late on Saturday requesting it be delayed, saying the 71-year-old “has had no involvement with the facts or allegations underlying this case”.

They argued her public testimony would create “an unnecessary media circus and personal security threat that serves no purpose other than to harass and embarrass her”.

In a ruling late on Sunday, a judge said Monday’s deposition could take place.


A lawyer for the women argued that because Camille Cosby has been the TV star’s wife and business manager, she could have useful information.

1 Reply
1
Reply Thu 25 Feb, 2016 06:17 am
@ehBeth,
I think its important to know what her mind is this mess, did she by doing nothing and saying nothing keep this thing going on so long? 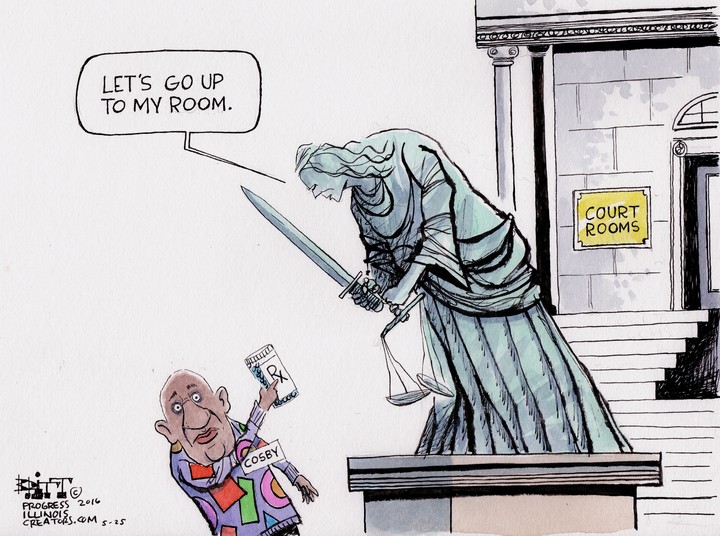 I really loved the guy coming up, there weren't that many black comics: Godfrey Cambridge, Dick Gregory and Bill Cosby.

For a long time the late great Felix Dexter was known as the black comic who wasn't Lenny Henry. Here he is in all his glory.

0 Replies
1
Reply Fri 27 May, 2016 11:04 am
@cicerone imposter,
Undeniably. So undeniable that high PoC prison population states and corporate prison industries strangle statistics and fact to deny it. "Yeah, but ..." is not an argument.

last week, Bill Cosby’s legal team filed a motion to move his upcoming trial out of its current suburban Philadelphia location, or bring in a jury from elsewhere. Cosby’s team, in filing this motion, claimed that there has been “widespread negative press coverage” surrounding his case. In legal documents filed Thursday obtained by Vanity Fair, a prosecutor stated that the comedian’s trial should remain where it is, dealing Cosby yet another blow in just the latest of a string of requests from his legal team to try to prevent a guilty verdict.

While Montgomery district attorney Kevin Steele requested in his latest filing the judge to deny the trial’s relocation, he said he wouldn’t oppose Cosby’s team’s request to bring in the jury from elsewhere in Pennsylvania. He asked that once the jury is selected, the judge bring them back to Montgomery County for the trial. Any of Steele’s requests will need to be certified by a judge before going forward.

In the documents, Steele called Cosby’s continued attempts to prolong the pre-trial process a “continued strategy of delay and distraction.” Steele noted: “He has insistently blamed everyone and everything—except himself, of course—for the situation he now finds himself in.”

The filing also stated that Cosby is a “celebrity who is alleged to have committed nearly fifty sexual assaults,” therefore “he cannot expect to find a jury venire—anywhere—that is completely oblivious to the facts surrounding the case.” Steele argued against the type of special treatment for the rich and famous Cosby appears to be requesting, stating celebrities ”would be immune to prosecution” if the court sought jury members with complete ignorance of a widely publicized case.

0 Replies
2
Reply Tue 17 Jan, 2017 06:45 pm
this case has already had an impact in the changes to statutes of limitation that have resulted

Papantonio: Well, Gloria, over the years you’ve had such a huge impact on women’s rights cases similar to this, just like this in many regards, but in this case you actually … I think some of your work actually changed the law in California where they changed the statute of limitations. They were able to make some positive changes to where women could bring these cases because so many times statute of limitations on rape cases it’s impossible for the victim to really come forward because they’re excluded, the case is excluded. Your work has been successful in changing a lot of that. What’s your take on that issue in general, the use of statute of limitations on rape cases?

Allred: The statute of limitations in the United States is for allegations of sexual assault or rape is different in every state and is different for criminal versus civil and is different if it’s an allegation that an adult was sexually abused or that a child was sexually abused. To make it very, very simple, what we’ve done is we have gone to various states ever since this Bill Cosby situation developed and many of the accusers say that it’s too late now for them to do anything and therefore they can’t do anything of a legal nature. Although, of course, there’s no statute of limitations in speaking out against what is perceived to be injustice. We’ve gone to Colorado. We’ve gone to Nevada. There we were successful with the huge assistance of some of the accusers and we have been able to change the law to lengthen the statute of limitations, the time period for criminal prosecution of rape and sexual assault.

After that, we went to California. We testified in the legislature. I met with some of the governor’s representatives, and many of the accusers, some of whom I represent, also testified and spoke out, and because of their courage we were able to go for what I call the whole enchilada. We didn’t want to extend it in California for criminal prosecution; we wanted to eliminate it. We have been successful. I give a great deal of credit to the accusers, and also to our governor, Governor Jerry Brown, who had the vision and the foresight and understood how important it is to eliminate that statute of limitations in the future for criminal prosecution of rape and sexual assault, and he signed the bill into law.