Forums: Politics, Religion, Christianity, Yourefired
Email this Topic • Print this Page
-1
Reply Mon 30 Dec, 2013 05:35 pm
@parados,
True the ratio between blacks and whites being imprison is fairly constant but the total percent of blacks and whites behind bars had gone up by roughly eight times since the 1930s so there was roughly an eight times increase of the likelihood of a black person would find himself behind bars in 2010 then there was in the year 1930.

Far less of the total male black population were being placed behind bars in 1930 then in 2010. 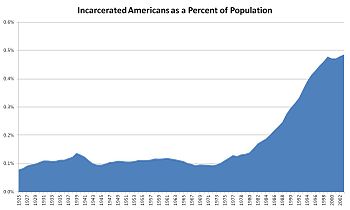 had it not been a relatively slow news cycle--it would not have generated the media buzz it got.

it couldn't have been timed much better for A&E

The new coke replacing old coke IE coke classic battle work out great for coke cola but that was not the idea going into that move.

For instance if a black man was caught in a park with a bag of kittens trying to attract the attention of small children, he would definitely be facing a custodial sentence.
2 Replies
2
Reply Mon 30 Dec, 2013 06:27 pm
@BillRM,
Quote:

You're totally ignoring history. Christians have more than their fair share of blood on their hands, in the name of their religion.

You're also ignoring the fact that such faith-based views continue to promote "murders" which are codified into law with capital punishment--murders carried out in the name of the state. The Bible Belt states--those with a higher percentage of fundamentalist and evangelical followers-- are also the Death Penalty Belt in terms of the number of executions.

The death penalty is largely a Bible Belt phenomena. 90% of the executions in this country are carried out in those states

And religious conservatives in those states remain staunch advocates of the death penalty, citing biblical law and practice to defend government-sanctioned killing.

And a disproportionate number of defendants who wind up on death row in the Southern states are black.

Still today, the combination of an African American defendant and a white victim is most likely to result in a death sentence. Rarely has it ever worked the other way around. In the southern so-called "Bible Belt", in cases like these, when a verdict was handed down against the black defendant, the people would periodically break down the prison doors, drag out the defendant and lynch him publicly-and this was done by many who are still alive today! And this was not just a few people. We're talking huge mobs.
http://americansformorality.com/death/death.html

The murderous consequences of more fundamentalist Christian "morality" are very much still with us. And they aren't just confined to the types that bomb abortion clinics or kill doctors who work in them, or who commit hate crimes against blacks and homosexuals or those of other religions.

I regard the barbarism of capital punishment as being among the continuing murderous consequences of these fundamentalist beliefs.

For instance if a black man was caught in a park with a bag of kittens trying to attract the attention of small children, he would definitely be facing a custodial sentence.

The Bible Belt is still significantly the Death Penalty Belt.

What is all the hand wringing about? You would be one of the first to
say a private employer should be able to fire for whatever.

Remember the dental assistant who was considered too attractive by her
boss so she was history.


nope. according to me employers should only be able to fire for work problems or lack of work. I would be willing to consider firing teachers for instance for proven morality problems but that would be a tough sell. I dont remember that I supported the dental assistant firing, but I do consider workplace dynamic problems to be work problems in some cases. I fired one guy because he loved to stir the ****, and I demand no back stabbing or excessive drama.
1 Reply
2
Reply Mon 30 Dec, 2013 07:38 pm
@hawkeye10,
"Morality" is relevant sort of speak..so when is it ok to trample on another human being's livelihood . I've seen too many people loose their jobs to office politics..
1 Reply
1
Reply Mon 30 Dec, 2013 08:16 pm
@Germlat,
Germlat wrote:

"Morality" is relevant sort of speak..so when is it ok to trample on another human being's livelihood . I've seen too many people loose their jobs to office politics..


every single place that I have worked where people got fired for office politics either had incompetent managers or managers who where using office polices to promote their power. AKA had bad managers.
1 Reply
1
Reply Mon 30 Dec, 2013 08:22 pm
@Germlat,
Quote:

This is a bit vague..please explain. ( black man with kittens?!)

It was a weak personal attack on me, that have nothing to do with the subject at hand, for once taking the following kittens over to a park across the street from my home in one of my many attempts to find homes for them.

After all men in parks with kittens must be pedophiles instead of cat lovers looking for homes for kittens.

PS except for one kitten that I fell in love with I did in the end find homes for all the others and I never would have put them in a damn bag.

Good for you..glad someone gives a darn about these homeless creatures!

I was a dog lover only at least until my now wife turn me into a cat person by some magic or others.

All my many cats over the years since had just walked into my life and home under their own power and have more then paid me back for their room and broad.

I am now down to two cats one being the mother cat in the picture with her kittens.
0 Replies
5
Reply Tue 31 Dec, 2013 04:26 am
@Germlat,
That's his cover story. BillRM was ejected from a park because he was using kittens to entice small children. It's a well known tactic used by paedophiles.

Curry lured the girls into a shed behind his parents' house, using sweets, kittens and money to attack them on a daily and weekly basis.


Patrick Treacy said Curry of Kells Road, Kilkenny, had a "calculated and planned system in place to repeatedly indecently assault children" on dates between 1964 and 1985.