ALEXANDER ABAD-SANTOS 3:01 PM ET
Reuters is reporting that the headquarters at the Boston Marathon have been locked down after two explosions were reported near the finish line Monday afternoon. Here's a Twitter image of the current scene there:

From the Associated Press
April 15, 2013, 12:07 p.m.
Two explosions at the finish line of the Boston Marathon have resulted in injuries.

Bloody spectators were being carried Monday to the medical tent that had been set up to care for fatigued runners. Police wove through competitors as they ran back toward the course.

“There are a lot of people down,” said one man, whose bib No. 17528 identified him as Frank Deruyter of North Carolina. He was not injured, but marathon workers were carrying one woman, who did not appear to be a runner, to the medical area as blood gushed from her leg. A Boston police officer was wheeled from the course with a leg injury that was bleeding.

About three hours after the winners crossed the line, there was a loud explosion on the north side of Boylston Street, just before the photo bridge that marks the finish line. Another explosion could be heard a few seconds later.
0 Replies
1
Reply Mon 15 Apr, 2013 01:20 pm
@Butrflynet,

The blasts happened at about 2:50 p.m. near the intersection of Boylston and Exeter streets. Witnesses said several victims lost limbs,
and the area was being evacuated.

The first explosion happened across from the Lenox Hotel and the second blast was about 15 seconds later, witnesses said.

Many of the injured appeared to be spectators who gathered for the 117th running of the race.

NewsCenter 5's Sean Kelly said the impact of the explosions could be felt blocks away.

The victims were being taken to Massachusetts General Hospital. 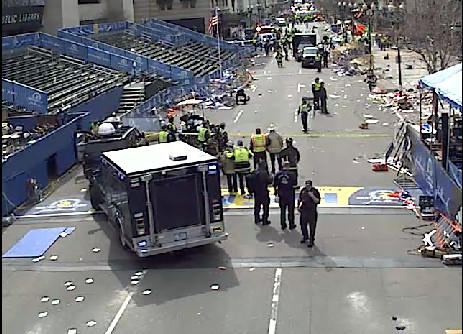