Forums: Dyslexia, Health, Medical, Hospice Care, Palliative Care
Email this Topic • Print this Page
1
Reply Sat 23 Apr, 2011 07:25 pm
@edgarblythe,
My mother was cremated.
The day after she died (or the evening thereof) she was released with family's permission to a funeral service which transported her body the thirty miles +/- to the crematory. A day or two later the same funeral service picked up her 'cremains' (isn't that an annoying word!) and took them to their funeral home.
when my brother and I picked them up, the 'cremains' were in a homely cardboard container -on purpose, I'm sure. The funeral home person then pitched a variety of beautiful 'urns'. The cheapest, as I recall, was in the neighborhood of $200. My brother succumbed to the sales pitch and personally paid for a $200. urn which was buried with my mom's ashes two days later!
I remember being amazed and angered at how the funeral industry had found a way to insinuate itself into even a simple cremation that had no wake or 'viewing ' in a funeral home, no funeral home cars to the cemetery, etc.
(the funeral/memorial service was in a chapel on the grounds of the cemetery where mom's ashes were interred). First of all, the crematories themselves are usually OWNED by funeral companies. Secondly., they have contrived to have the law written in such a way that only funeral homes (or possibly a private ambulance service) can TRANSPORT a body from a hospital/morgue to the crematory. This is supposedly justified for health reasons. Presumably the funeral homes want to wedge themselves into the process so they can sell you as many 'services' as possible - everything from acting as intermediary with newspapers, to providing wake and viewing space, to limos etc to transport family and mourners, and, of course, the most expensive 'vessel' that they can get you to buy for the remains.
Even the cemetery squeezed as much money out as possible - eg. $350. to 'open the grave'. The latter is the same price as for six foot coffin excavation even though the 'urn' was no larger than a quart of milk. In my mother's case there was no option to 'scatter' her ashes somewhere as she wished to be buried in the same cemetery plot as HER mother. (who died at age nineteen when Mom was an infant).
I know what some are thinking: 'Why not casually dig a hole for mom's ashes with a gardening tool and ignore the cemetery people?'
Answer: It could be done, BUT, as soon as we would attempt to have the headstone altered (which couldn't be done without the cemetery's knowledge) to include mom's name they would know and they would bill for grave opening.
Anyway, perhaps this info is useful in some small way.
-jjorge
2 Replies
3
Reply Sat 23 Apr, 2011 07:32 pm
@jjorge,
which is why I am ignoring all laws regulations, nothing in writing, trust others to carry out my wishes. (cardboard box over the bridge)
1 Reply
1
Reply Sat 23 Apr, 2011 08:14 pm
@jjorge,
Good post. I have the vague feeling that Louisianna even requires a casket, but I may have misremembered that detail. Anyhow, they do have a powerful undertaking lobby there.

.
2. Will the #!%#! S.O.B.'s at the crematory give a hard time to someone who is transporting a deceased person to them in an unconventional way?

they will likely refuse service in most jurisdictions in North America
0 Replies
1
Reply Sun 24 Apr, 2011 10:19 am
@dyslexia,
I've rafted under that bridge. Beautiful and peaceful spot of nature. Nice choice Dys.
1 Reply
1
Reply Sun 24 Apr, 2011 10:49 am
@littlek,
Yeah I kinda figured you had and so have I, nice to know we share that. perhaps you've also be to El Rito.
bob

It's against the rules for Jewish people to be cremated, so I don't know much about it.

I don't think that there are any religious prohibitions against cremation for most Jewish people. I can't speak for the Orthodox. I would suspect, that after WWII, many Jews did not take too kindly to the idea of being cremated, understandably so.

I had my mom cremated. I called the Jewish cemetery where my dad is buried, (Beth David, in Elmont)and asked if there would be any problem about burying her ashes next to him (she already had a headstone in waiting). They saw no problem with it, but they did charge for opening the grave.
2 Replies
1
Reply Sun 24 Apr, 2011 12:56 pm
@Phoenix32890,
As a Jew my experience has been not hearing any objections from the cemetary folks but with Jewish Laws and Conservative Rabbis. Needless to say, Orthodox rabbis are against it.

"Jewish law takes a very strong position on the importance of honoring the dead. Any action that brings shame or desecration upon the dead is forbidden in Jewish law. Also, Jewish law requires the timely burial of the dead in the earth. Both of these laws are interpreted against the practice of cremation.

As you mentioned in your letter, the Jewish position against cremation has taken an added dimension since the experience of the Holocaust. The burning of Jewish bodies, for many, has strongly disturbing resonances for many of today's Jews.

There is a difference of opinion, however, concerning the burial of ashes remaining from cremation. Many, but not all, traditional authorities do forbid the burial of ashes in a Jewish cemetery because it encourages the practice of cremation. Some traditional authorities, however, do permit internment of ashes because to deny burial would itself be a violation of the command to bury.

The Reform Movement has a stated position that rabbis should not refuse to officiate at the burial of the ashes of a Jew in a Jewish cemetery. The Movement maintains a position of discouraging cremation."
1 Reply
1
Reply Sun 24 Apr, 2011 01:00 pm
@Phoenix32890,
For orthodox Jews, it's forbidden.

And even the "Union of Progressive Jews" has some difficulties - at least their German section, due to Scho'ah. (However, all progressive Rabbis would do cremation if it was the will of decided person.
0 Replies
2
Reply Mon 25 Apr, 2011 10:51 am
apparently there is a movement called "Green Cemeteries" where caskets, vaults, headstones etc are not allowed, there is one outside Santa Fe named
Quote:

there is no landscaping other than local plant life. To the issue of spreading ashes, what I've been told for here in New Mexico (and most other states as well) it is a technical illegality but not enforced so as long as there is no overt public display one can scatter ashes pretty much anywhere as long as a Death Certificate is obtained from a crematorium and registered with State Vital Statistics (or whatever). both of my brothers were cremated and their ashes scattered on public lands. My parents have arranged to also be cremated but have their ashes interred with a family headstone in a city operated cemetery.
It appears to me, at this time, my ashes tossed from the Rio Grande Bridge presents no problems. As far as I know the tossing will be done by Lady Diane and the Hospice therapist. There will be no "urn" as my ashes will be in a plain cardboard box with a plastic limning intended to shatter on the rocks at the bottom of the canyon. 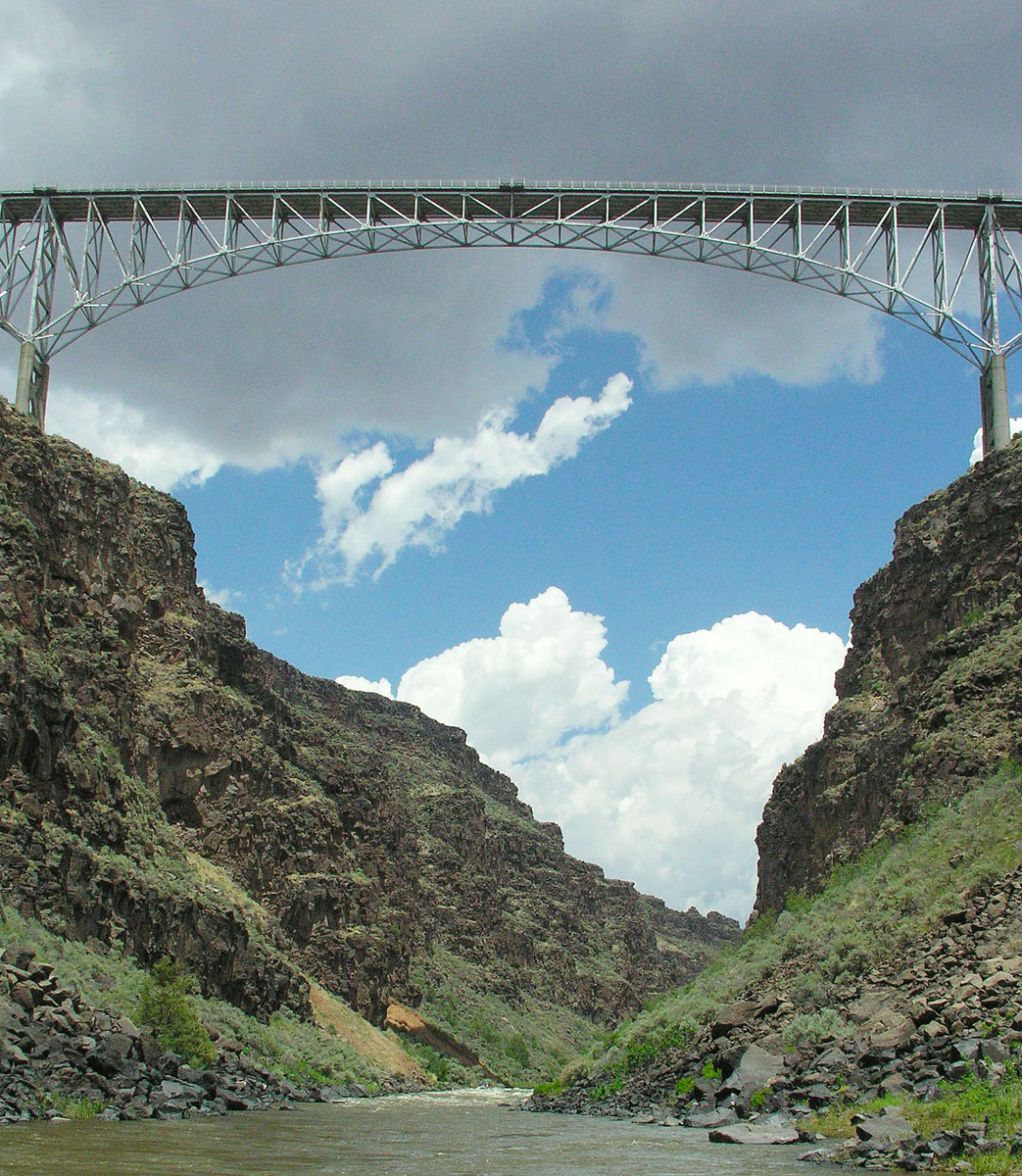