Forums: Politics, U S Politics, American Politics, Us Politics, Trump
Email this Topic • Print this Page
-2
Wed 2 Mar, 2016 12:33 am
@Olivier5,
Ruby like millions of others in the US including myself Kennedy was our hero and we personally hated Oswald with a deep passionate.

I still can remember being shock at the live airing of Oswald being shot and then feeling like cheering.

No other president cause me to feel like Kennedy did with such statements as ask not what your nation can do for you but what you can do for your nation, we plan to go to the moon not because it is easy but because it is hard,let it be known that the new generation of Americans had taken the torch and we will support any friend and confront any foe.
1 Reply
2
Wed 2 Mar, 2016 03:28 am
@BillRM,
You're still a sucker for propaganda, William.
1 Reply
-1
Wed 2 Mar, 2016 07:27 am
@Builder,
Quote:

You're still a sucker for propaganda, William.

Sure I am and even those god know how many people would had needed to had been in on this plot to killed Kennedy and somehow all the details was keep secret since the 1960s well pass the lifetimes of the plotters or are you talking about the careful placing and the the equally careful covering up of hundreds of tons of explosives in the two towers?

What silly myth are you referring to?
0 Replies
2
Wed 2 Mar, 2016 07:41 am
Pretty solid night for Trump. Kasich is saying he is staying in the race until March 15, Cruz has no chance but it putting himself out there as the front runner to beat Trump, Rubio just can't generate any heat. In a 3 or 4 man race, Trump wins hands down.
1 Reply
3
Wed 2 Mar, 2016 07:50 am
@engineer,
Why the bloody hell are people yabbering on about the Kennedy assassination in a Donald Trump thread?! a2k digressions at its finest ... sorry ... I mean goofiest.

As Super Tuesday is approaching and a number of U.S. states hold primaries and caucuses, The Current convened a panel of Trump supporters to explore the growing popularity of the untested populist politician.

Carlo Maffatt moved to the U.S. from his birthplace of Mexico in 1990. He's an entrepreneur and has done marketing work for political campaigns for both big U.S. parties, most recently Ted Cruz.
Lauren Martel is a lawyer who owns her own firm in Hilton Head, South Carolina . She's been a registered Republican for 30 years since she was 18.
Jeff Scrima calls himself a socially liberal, fiscally conservative Republican. He is the former mayor of Waukesha, Wisconsin.

Not many would believe that Trump would be "in it to win it" this far in the game.

And now the Democrats and Republicans face new challenges in how they strategize their campaigns heading to the November election.


Guests in this segment:

19 minute podcast at the link above

He heralded the 20-minute interview in a blog post that boasted about his access inside a Trump rally in Memphis, Tennessee, last Saturday, where Edwards was broadcasting his show live. He said Trump's campaign gave Edwards and his co-hosts full press credentials and "VIP" parking near the event.

"We're watching history in the making," Edwards said at the start of his three-hour broadcast from the press area of the Memphis Trump rally. "Donald Trump will be the first Republican nominee that I have ever voted for."


Some of the things said by the white nationalist show that the Trump campaign credentialed: 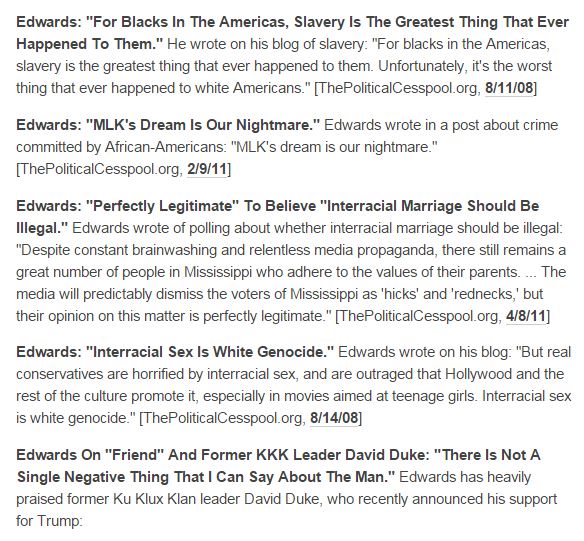 http://mm4a.org/1Qr2baY
http://www.theoccidentalobserver.net/2016/03/james-edwards-of-the-political-cesspool-at-a-donald-trump-rally-in-memphis/
1 Reply
1
Wed 2 Mar, 2016 10:01 pm
A tally of nine states where Democrats and Republicans both headed to the polls on Tuesday shows that total turnout looks much like it did eight years ago — but the numbers are reversed by party.

More than 5.6 million votes were cast in the Democratic contest on Tuesday in Alabama, Arkansas, Georgia, Massachusetts, Oklahoma, Tennessee, Texas, Vermont and Virginia. About 8.3 million were cast on the GOP side in the same set of states.

(Those numbers are based on votes as they were still being counted Wednesday morning, which means that the totals will go up in the coming hours and days as the final tallies are tabulated.)

http://www.nbcnews.com/politics/elections/super-tuesday-voter-turnouts-similar-08-republicans-democrats-reversed-n530071
1 Reply
1
Wed 2 Mar, 2016 10:04 pm
@edgarblythe,
If the GOP maintains a higher turnout through the general - yikes!
0 Replies
1
Wed 2 Mar, 2016 10:41 pm
Trump releases paper detailing health care under his administration
https://www.donaldjtrump.com/positions/healthcare-reform
1 Reply
-2
Wed 2 Mar, 2016 11:09 pm
@bobsal u1553115,
Well there is a little truth in the white supremacists claims that given the sad conditions in most of Africa the descendants of slaves who ancestors was brought over by slavers are better off by far then those who was let behind.

I had known peace corp members who told me about those sad conditions in Africa with bad water and diseases and lack of enough food or medical care but how does that justify slavery?
0 Replies
-2
Wed 2 Mar, 2016 11:36 pm
@bobsal u1553115,
By the way Trump and his people have every right to kicked out members of groups such as BLM who groups have a history and pattern of interfering with Trump rallies.

An that right is independent of the color of their skins.
0 Replies
2
Thu 3 Mar, 2016 06:47 am
I find the whole sending failed candidate Romney out as attack dog against Trump intriguing. They had a great bromance going when Trump endorsed Romney in 2012.....and now, with the GOP eating itself, all hopes are on Romney to bring Trump down. Romney has a speech planned tonight which will apparently be designed to give Trump's rivals ammunition in tonight's debate. IMO it won't make any difference unless the moderators really put The Donald on the spot and hold his feet to the fire for some real answers. Otherwise we have seen Trump survive and soar after attacks by his opponents.

What is in it for Romney?


I read it. This "plan" impressive to you?
1 Reply
2
Thu 3 Mar, 2016 06:50 am
@snood,
Why does something I share to inform have to be impressive to me?
1 Reply
1
Thu 3 Mar, 2016 06:55 am
@edgarblythe,
It doesn't, I suppose. When I share something on a link it's something that made an impression on me and I wanted to share. Made an impression = impressed. I wouldn't share a link that gave an air of legitimacy to Trump, because I think he's a vile charlatan, but you are certainly entitled to your different strokes.
3 Replies
2
Thu 3 Mar, 2016 07:09 am
@snood,
In my view you have to be willing to look at all sides if you want to know what you are fighting and why.
1 Reply