Is the Confederate Flag a symbol of racism?

While people are entitled to their own speech patterns and to use words in an eccentric way, there are definitions that are widely, even universally, accepted

And at some point minority views get so minority that they get disregarded, but in this case we have pressure groups trying to ban the flag...which is bad enough....but at a time when a great many Americans feel that it is not offensive.
1 Reply
0
Reply Thu 27 May, 2010 08:00 pm
@hawkeye10,
You can't please everybody. To many of us, American conservatism has a long history and the Confederate flag is part of that history.
1 Reply
1
Reply Thu 27 May, 2010 08:02 pm
@engineer,
I would certainly agree with your observation there, engineer. It was in the 1940's and 1950's that the "Flag" became a symbol of racism.
And then, for whatever reason, it became adopted by too many schools as an emblem of...something. Rebellion, perhaps, against authority. I don't know.
Could have been racism. Could have been simple stupidity or insensitivity.
I am sticking to my belief that the Civil War was not totally defined by the issue of slavery.
There were other issues, I believe, that were major factors.
Did yall know that Virginia, in early 1861, was eager to not secede? The areas around Washington and what is now West Virginia worked hard under the leadership of the former President, John Tyler, to find a solution. It almost worked.
Until Fort Sumter. April 13th.
And then the young lads, the 19 year olds who lived in the hollows of the Blue Ridge Mountains; who had probably never met a slave much less owned one, streamed out to fight.
I doubt that they were ideologically driven by much of anything rather than the thrill of fighting a short war in the Spring.

In summary, I have no problem with historians and students of history commemorating the Civil War. But I do find it offensive that a flag from that period is frivolously used as an athletic banner.

Thanks for reading this. I am done on this topic, I think.

1 Reply
0
Reply Thu 27 May, 2010 08:26 pm
@realjohnboy,
Maybe they were just looking for 'adventure' and the chance to be 'somewhere else.' i think that many young people have gone to war or to sea or out west just for those reasons.
1 Reply
1
Reply Thu 27 May, 2010 08:48 pm
@plainoldme,
I agree completely. I said that they were probably not driven by the "cause." Many of these young men, on both sides, thought that they would be home by the Fall after a romp.
I only met one guy in VN who was there for the "adventure." He was an ex-farm boy from Wisconsin who was escaping that life. When I knew him in 1969, he had been in VN for 3 or 4 years. Longer than any of the officers.
It did not turn out well.
0 Replies
0
Reply Thu 27 May, 2010 08:52 pm
@plainoldme,
plainoldme wrote:

You can't please everybody. To many of us, American conservatism has a long history and the Confederate flag is part of that history.

historic meanings do matter, but we also have the ability to redefine words and symbols. And we don't have to accept other peoples meaning as our own. For Bill the flag seems to mean racism, but he has no right to say that it means racism for everyone. He also has no right to say that no one should be flying it. He is in control of what he says and believes, and everyone else has the right to the same respect being return to us.


Communication is a two part action. You send a message and the other person receives it. If you send "heritage" and someone else understands "racism", you haven't communicated correctly. You can fly a swastika banner to show your love for Chinese letters, but no one is going to see it that way. If you show the battle flag, some are going to receive the message that you are a racist. If you are ok with that, then fine, I'm all for free speech, but those who perceive you that way aren't irrational for thinking that based on the last century of history.
1 Reply
3
Reply Thu 27 May, 2010 09:18 pm
@engineer,
I have never flown a Confederate flag, nor do I expect that I ever will, but I will continue to defend the right of those who want to fly it to do so.

I am not seeing the problem that is said to need the remedy of shrinking the right to free speech. Let those who want to fly it do so, and those who object can complain if they feel the need. Those who fly the flag may or may not care about objections, and conversation between the two sides may or may not happen, but all is good. There is no such right as the right to walk down the street without encountering people and things that piss you off. Just as I smoke a giant cigar now and then as a giant "**** you" to the anti tobacco militants I hope that some people will put at the confederate flag even if it means nothing to them. The main rebellion that am interested in is against the know-it-alls who try to tell us what to do with our lives, and against those who keep objecting to free speech.
2 Replies
0
Reply Thu 27 May, 2010 09:25 pm
@hawkeye10,
I suggest that you have no rudder . . . no philosophy . . . that you simply like flipping the bird at everyone who stands in your way . . . or what you perceive as your way at the given moment.
1 Reply
2
Reply Thu 27 May, 2010 09:34 pm
@dyslexia,
Quote:

It is a known fact

I notice that David has many known facts that are known only to him.

O, u cawt me!! I shoud have said:
"It is a known fact EXCEPT those who wallow in such ignorance as Prof. Plain." Is that better?

I suggest that you have no rudder . . . no philosophy . . . that you simply like flipping the bird at everyone who stands in your way . . . or what you perceive as your way at the given moment.

3)That your rights end where mine begin, at that point we need to work it out.

6) war and lesser conflicts are a requirement, we are not whole without this allowing our dark sides to work from time to time.


7) everything changes with time, to include what is good and what is bad

8) humans are better when individuals are not coddled, hard work and competition builds human beings, treating them like children (victims) destroys them.

You impression quoted above comes from the fact that I am more likely to comment when I object than if I agree, and because we as a civilization are seriously off course there-for the majority opinions are often wrong and in need of confrontation.
1 Reply
0
Reply Thu 27 May, 2010 10:06 pm
@hawkeye10,
Your idea of repression is exaggerated.
0 Replies
2
Reply Thu 27 May, 2010 10:07 pm
@DrewDad,
Quote:

And I don't see that Engineer suggested that anyone should not have the right to fly the flag if they wish; he simply indicated that anyone flying it should be prepared to accept how people will view it.

that is a position that I agree with. We need to trust that what people say about what they believe is the truth, unless we have good cause (really good cause?) to conclude that they are lying. This gets to the basic lack of respect for each other that we currently suffer from. If the person flying the flag says that he intends to show that he loves the south we should believe him. If a person looking at the flag says that he gets feelings of racism from looking at it we should believe them. How do we get from this difference between people to one where we think it is ok to tell other people what to do? Have we forgotten that people are different? I think so.
1 Reply
0
Reply Thu 27 May, 2010 10:16 pm
@hawkeye10,
hawkeye10 wrote:

We need to trust that what people say about what they believe is the truth, unless we have good cause (really good cause?) to conclude that they are lying.

Except that some symbols are really, really clear.

Not everyone knows that 88 stands for HH stands for Heil Hitler. Just about everybody knows what the Confederate flag stands for, though.
1 Reply
3
Reply Thu 27 May, 2010 10:17 pm
@plainoldme,
Plain,
joking aside:
there are some leftists in this forum
and 2 rightists, who I have written off as hopelessly stupid
wastes of time, and put on Ignore. There are several leftists in this forum
for whose minds I have sincere (earned) respect and I have said so,
regardless of our substantive disagreement. These are men who are ABLE to argue
and who do so skillfully and sometimes dispassionately. One of them is a physicist.

I have not yet thrown in the towel on u.
A lot of the time, u r satisfied to merely hurl personal insults
and to declare that u BELIEVE one thing and DON 'T believe something else.

I remain uncertain as to whether or not u r ABLE to cogently engage in factual argument,
logically marshalling your evidence in proof of your conclusions. The (alleged) fact that u
have some degree of education, ostensibly lends credence to the possibility
that u r mentally able to engage in logical examination of matters of interest; maybe.

Debate can be fun,
IF u do so with a reasonable degree of skill combined with intellectual honesty,
and that u "hear out" and consider the other side of the argument,
as distinct from merely exchanging insults.

Some extent of self discipline is involved to follow the logic,
and to restrain emotions from undermining the processes of analysis.

R u willing to do this ?

Just about everybody knows what the Confederate flag stands for, though

What separates "willing blindness" from ignorance? Not much right? If not, then I don't think there's much ground between your position and mine, as I've already conceded some Southern Pride is a reflection of willful ignorance (willing blindness if you prefer) and you've already conceded that absent the defense of slavery there would be no confederacy... let alone the need to make a flag to fly over it.

I also think there is a large gap between "willing blindness" and willful racisim.

I'm not sure whether you agree or disagree with the assertion that the confederate flag can be and is at times used as a symbol of something other than slavery or racisim: e.g. Southern pride, or rebellion.

The Nazi swastika is, I suppose, occassionally used not as a symbol of brutally racist facisim but as simply a "F*ck You" emblem; a symbol of either bad taste or simply a disregard for any sort of taste. Not exactly a positive alternative usage, but I don't necessarily believe that every goth punk who wears a swaztika shirt or tatoo hates jews and is a white supremist.

Of course their usage displays a disturbing disregard for the sensibilities of others, but that's exactly what they want to project.

Some who use the confederate flag as a symbol of something other than slavery or racisim quite possibly intend it as an "in your face" expression, but I don't think that's the case for all. (Certainly it wasn't the case in the Dukes of Hazzard show).

The following are examples of it's use that I think you would be hard pressed to connect with racisim: 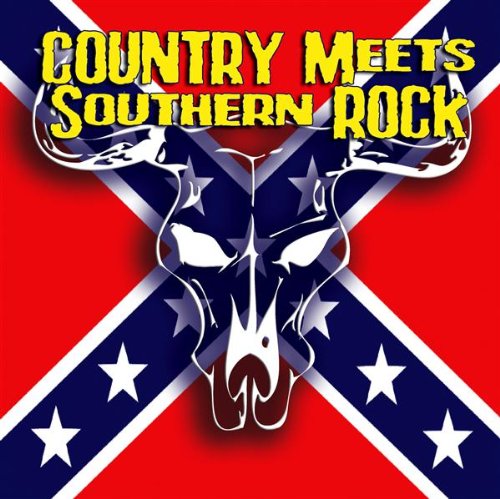 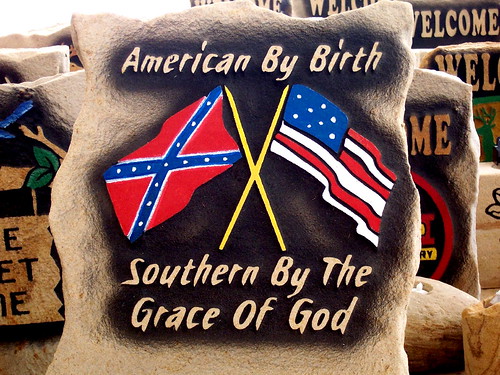 As opposed to these: