Forums: Politics, Guns, Gun Control, U S Politics, American Conservatives
Email this Topic • Print this Page
4
Mon 23 Jan, 2023 08:03 am
Another mass shooting here in California, We're the most violent nation in the world!

The latest on the Monterey Park mass shooting

At least 10 people were killed in a mass shooting Saturday at a dance studio in Monterey Park, California, as the city’s Asian American community was celebrating Lunar New Year weekend.

Authorities say a 72-year-old man suspected gunman was found dead Sunday with a self-inflicted gunshot wound after officers approached his vehicle. Investigators have yet to determine a motive.

The man had been a regular presence at the dance studio where the shooting occurred, sources told CNN. Shortly after the attack, police say the gunman showed up at a second studio in nearby Alhambra, where patrons confronted and disarmed the man. 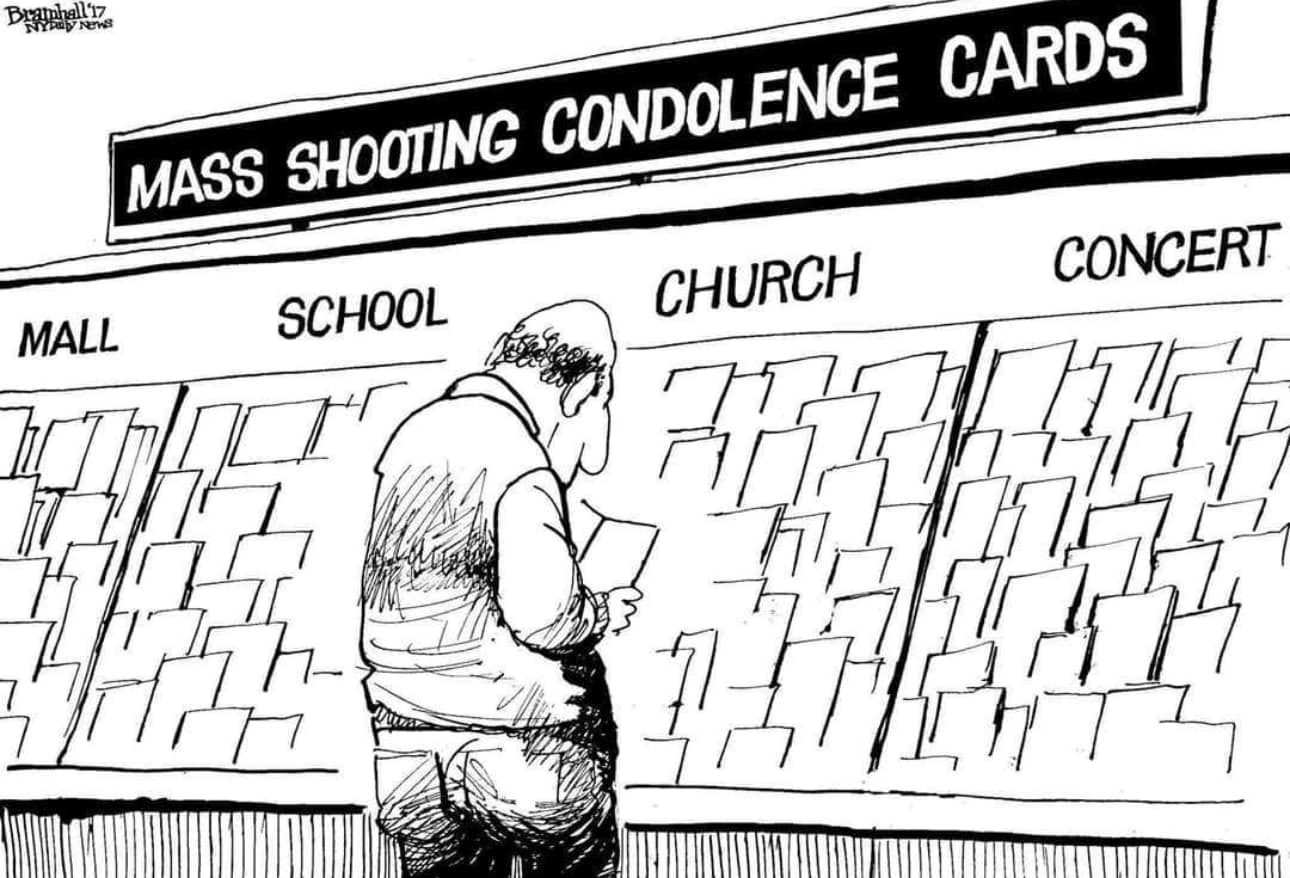 It seems to me that passing more background checks and the like have had or will have little effect on our horrific gun violence culture. Consider the following paragraphs from the above link.

Despite claims by the US gun lobby and their powerful political backers, little connects these shootings in terms of the killers’ background or mental health. Instead, the connection is the ready availability of deadly weapons – and that is what differentiates the US from most other advanced countries.

Americans bought an estimated 150m guns in the past decade, with sales increasing, especially during the pandemic. There are more guns in the US than people, according to a 2018 Small Arms Survey report, which found the country had the highest rate of firearm ownership in the world, and more than double the next country on the list, Yemen.

It is our whole gun happy culture which is largely to blame for the gun violence in our country, in my opinion. Almost anyone of any political background affiliation supports background checks and other such legislation. But if you start talking about guns of any kind, no matter how deadly, and it is a kind of non-starter. It is not just the NRA or the republicans, it is a good deal of the public.

Also, people seem more aggressive and more careless of human life in our country, and there really are no real movements anymore to combat it. Instead of talking about world peace. I wish people would talk about our own peace and safety in our country from our own selves.

2 Replies
2
Thu 26 Jan, 2023 01:08 pm
@revelette1,
Actually, I think there is a lot that can be done about gun violence, that has little to do with guns, and more to to with the people themselves. It relates directly to the loss of trust of others, the loss of respect, loss of control, and in particular the loss of a sense of self. Addressing these would lower gun violence (and also lower the rates of domestic violence)

2. Bring back manners. Outside of 'food etiquette' (which doesn't particularly matter to this conversation), manners were actually about disagreeing respectfully and treating people courteously (ie. with consideration and respect) They weren't perfect, but they were much better than what we have now.

4. Get rid of the concept of blame, and introduce Personal Responsibility and Contributing Circumstances. Blame allows people to blame others for who they are & where they are at ('you made me so mad', 'others have put me in this position', 'I can't control my lot in life' etc). If everyone is responsible for their own decisions & emotions, even while other factors contribute to those decisions & emotions, then you can't get away from the fact that who you are, where you are, and where you are going in life is your responsibility, so the only way to make improvements is to go about trying to improve.

Once people start doing this for a while they: start problem solving (necessary to resilience), start solving problems (develops self assurance and a sense of achievement), become more emotionally mature (particularly as they are no longer blaming others for their emotions, and also because their resilience is increasing), gain more control over their lives (problem solve & gain confidence to overcome, no longer blame others for their lot) meaning they don't take it out on 'people they can safely control'.

5. Allow people to gain more control over their lives, because 'those with no control over their lives at work take their control needs out on those who they think they can safely control'. Government needs to stop 'stepping in to solve a problem without the person first trying' (ie. being a solution for everything). Being able to solve problems (which is developed by constantly engaging in problem solving) is necessary to ones sense of control. No problem government stepping in if they've tried, tried, and failed. Just don't do it at the first instance. This is similar to point 4, but this is about governments involvement in disempowering people.

6. Create a system that develops self esteem rather than tears it down. People with high self esteem or who value high self esteem are rarely (needlessly) violent. High Self Esteem is the value you place on who you are as a person, that doesn't need outside validation (Ego needs outside validation, and attacks if that validation is threatened). To me, a very simplified view on its development is 'identify what values you admire in others, then develop them within yourself...and you will then know you have admirable qualities '

That's on 'self esteem side'. There's more to it, but this is to point out that I think our culture has been walking an unhealthy path, and increasing violence, domestic violence, and shootings don't truly surprise me.
1 Reply
2
Thu 26 Jan, 2023 01:23 pm
@vikorr,
In relation to trust, government has a big part to play in the loss of trust in the 'powers that be', because of:
- ever increasing secrecy
- ever increasing PR departments
- ever increasing regulation over peoples lives
- ever increasing political correctness (which as you can see from my previous post, actually differs from developing respect for others in ones community)

On the news front, the nature of nationalisation and globalisation of news (and social media) has lead to:
- people viewing all male primary school teachers with suspicion (of being pedophiles), which is why they can't touch children, whether to pat them on the back in encouragement, or hug them if they are crying.
- people thinking all (or most) police are corrupt or violent (when in fact such people would be a very minor part of any force, and such incidents would probably account for less than 0.01% of all police interactions, but nationalised and globalised news makes it seem a 'daily occurrence everywhere')

That means, for a lot of people, you can't trust what government says or does. This means many live in a world they feel they have no say in / can't control (which was what the vote was meant to give people in a democracy)

And those with no sense of control in areas of their lives, take it out on those they feel they can control...and you feel you have a lot of control if you are loaded to the hilt with guns & ammo.
0 Replies
-3
Sat 4 Feb, 2023 09:51 pm
@revelette1,
theguardian wrote:

Despite claims by the US gun lobby and their powerful political backers, little connects these shootings in terms of the killers' background or mental health.

Most of these mass murderers may not have a diagnosed mental illness, but they still would benefit from some serious mental health therapy.

Instead, the connection is the ready availability of deadly weapons -- and that is what differentiates the US from most other advanced countries.

Completely untrue. There are plenty of other countries where many people possess weapons. For example there is a belt of countries stretching from Finland to Switzerland that remains free.

It is our whole gun happy culture which is largely to blame for the gun violence in our country, in my opinion.

Does it even matter if someone is murdered with a gun instead of with a knife?

Does it even matter if someone is raped at gunpoint instead of at knifepoint?

Does it even matter if someone is robbed at gunpoint instead of at knifepoint?

Also, keep in mind that a lot of "unsolved gang murders" these days are probably vigilantes eliminating minorities that they suspect of being a threat to their neighborhoods. It's not like they are real murders.

Almost anyone of any political background affiliation supports background checks and other such legislation.

But if you start talking about guns of any kind, no matter how deadly, and it is a kind of non-starter. It is not just the NRA or the republicans, it is a good deal of the public.

Keep in mind that the only guns that progressives try to restrict are either harmless guns that there is no justification for restricting, or guns where current restrictions have proven more than adequate.

This is because progressives don't care about safety or saving lives. Progressives just think that it is fun to violate people's civil liberties.
0 Replies
-4
Sat 4 Feb, 2023 09:53 pm
@Mame,
Mame wrote:

Well, they sure did do one thing wrong - leave a loaded firearm where a six-year old could get it and take it to school and shoot his teacher.
That's irresponsible and just plain stupid.

Do you have any evidence that the parents did this? Last I heard, it wasn't known how the kid managed to get ahold of the gun.
0 Replies
-4
Sat 4 Feb, 2023 09:55 pm
@Region Philbis,
Region Philbis wrote:

Here's a YouTube of a guy letting his daughter fire his MAC-11/9 (with a MackJack installed so it drains a 32 round magazine in a single second).

the 2A mouth-breathers don't seem to have a problem with it...

You must be talking about progressives.

They're terrified of waking up one day to hear that no more children have been killed.

No, it's only progressives who want children to be murdered.

Whataboutthat is all they've ever had.

We have much more than that. We have all the facts on our side and we have the law on our side.

That's almost two mass shootings by the NRA every day.

when he's not getting off on gun killings he's gloating about the unvaccinated dying.
He spreads lies disinformation and misery to satify his own disgusting perversions.

You cannot provide any evidence of him doing any of those things.
0 Replies
2
Sun 5 Feb, 2023 03:29 am
Someone's feeling weak and powerless.