And now you are here presumably to console him and stroke his booboo.

I was sharing incredulity that you seem to be having a completely different conversation to the rest of the English speaking world.
1 Reply
2
Reply Fri 4 Oct, 2019 01:00 pm
@Walter Hinteler,
I'd be careful, you don't want any more snide homoeroticism.
0 Replies
2
Reply Fri 4 Oct, 2019 05:36 pm
@Walter Hinteler,
Seems to me there is in fact a difference between mass shootings and mass killings. One would include any firing of a gun whether or not anyone was killed, whereas the other would just count killings. 147 shToo damned many guns used too viciously, no matter how you slice it.ootings at schools is 147 too manyl whether or not anyone was actually killed.
0 Replies
-1
Reply Sat 5 Oct, 2019 01:31 pm
@izzythepush,
Quote:

I'm not a member of the NRA, nor am I involved in any way with them.

I was sharing incredulity that you seem to be having a completely different conversation to the rest of the English speaking world.

No you weren't. Mr. Hinteler lied about what constitutes a mass shooting. When I called him out on it, he defended his lie by offering up a source that does NOT support his claim:

‘‘(2) DEFINITIONS.—For purposes of this subsection— ‘‘(A) the term ‘mass killings’ means 3 or more killings in a single incident . . .

The meaning of the preceding is so clear that only an idiot could misinterpret it. And only an idiot would defend that idiot.
1 Reply
3
Reply Sat 5 Oct, 2019 01:51 pm
@Glennn,
Says the idiot who doesn't know the difference between a question and a statement.
1 Reply
-1
Reply Sat 5 Oct, 2019 02:34 pm
@izzythepush,
Let me get you caught up here. Mr. Hinteler said he googled the number of mass shootings for 2019 and said that he stands by that number. I told him that that doesn't change the fact that in 147 of them, no one was killed. He said, "So mass shootings only count as such, if someone is killed?" He was implying that those 147 shootings qualify as mass shootings. And in support of that opinion, he cited PUBLIC LAW 112–265—JAN. 14, 2013 126 STAT. 2435. When I showed him that what he cited failed to back up his position, he suddenly declared that he has no position here. He was wise to remove himself from that situation.

To clarify and verify it again: I didn't imply anything with my question - even not, when you got this idea from looking through my responses on other threads during the last 17 years.
I didn't "suddenly declare to have no position", because even now I don't have one ... besides that definition in said law.


2 Replies
-2
Reply Sun 6 Oct, 2019 03:20 am
@Walter Hinteler,
Posting random trivia without ever making a point is unusual behavior on a political messageboard.

It is reasonable for people to sometimes mistakenly assume that you intended to make a point.
1 Reply
2
Reply Sun 6 Oct, 2019 03:31 am
@Glennn,
You were asked a question and because you have problems with language you thought that was someone taking a position. Despite being corrected you still seem unable to appreciate the difference between questions and statements.
0 Replies
2
Reply Sun 6 Oct, 2019 03:33 am
@Glennn,
Glennn wrote:

You, on the other hand, felt the need to defend him by trying to make the case that I don't understand English.

I didn't "suddenly declare to have no position", because even now I don't have one ... besides that definition in said law.

Posting random trivia without ever making a point is unusual behavior on a political messageboard.

And the definition in said law does not does not support the list of mass shootings that you stand by.


How in God's holy name do you know that? 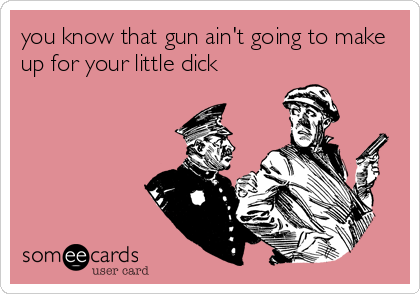 1 Reply
-2
Reply Fri 11 Oct, 2019 02:22 pm
@eurocelticyankee,
Sounds like that police officer is admitting that he has some inferiority problems, if he thinks that's why people carry guns, because presumably he has a gun in his own holster.

Probably all freedom haters have such inferiority problems. European serfs always claim that they are fine with their lack of freedom, but all they ever do is spout bitter name-calling at those of us who actually enjoy freedom.
0 Replies
-3
Reply Fri 11 Oct, 2019 07:26 pm
@MontereyJack,
MontereyJack wrote:

Your support isnt particularly valuable. The support for more action on gun control by 145 top CEOs presented to trump on the other hand is

Let's look at the track record of those 145 top CEOs.

Disarm Hate Act: ignored by both House and Senate
http://www.govtrack.us/congress/bills/116/hr2708


Boy! If I ever want to not get anything done, now I know just which 145 CEOs to turn to.

What's going to happen is, you and your 145 top CEOs are not going to get any new gun laws.

No soup for you!
1 Reply