The play is amazing. Yes, Shakespeare did not adhere to the facts of Richard's life but he writ large the eternal facts of politics. There is a scene in which Richard appears to a hired crowd in which his hired clacque is dispersed, flanked by two "holy bishops," holding a Bible. He says he can not accept the crown because he is too busy praying for the welfare of the country. Reminded me of several prominent American politicians.
0 Replies
1
Reply Sat 17 Sep, 2011 05:19 pm
We watched New Thor tonight on PPV, not bad, I liked it.
0 Replies
1
Reply Sat 17 Sep, 2011 05:47 pm
Night on Earth - great movie from the early 90s.
An anthology of 5 different cab drivers in 5 American and European cities and their remarkable fares on the same eventful night.
0 Replies
1
Reply Sun 18 Sep, 2011 04:31 pm
It's not often I'll watch a film more than once, not in the same
week anyway, but I made an exception for this one. I like a good
laugh and I got plenty from this film. Now it's an Irish movie so I
"might" be a little bit biased.

The movie is "The Guard" and stars Brendan Gleeson and Don Cheadle.

Storyline
Sergeant Gerry Boyle is a small-town Irish cop with a confrontational personality, a subversive sense of humor, a dying mother, a fondness for prostitutes, and absolutely no interest whatsoever in the international cocaine-smuggling ring that has brought straight-laced FBI agent Wendell Everett to his door.
Also if you don't like the F-word, then don't watch this film.
Here's a trailer.......
http://www.youtube.com/watch?v=nRsMLuCP8a0
2 Replies
1
Reply Mon 19 Sep, 2011 11:45 am
@eurocelticyankee,
Don Cheadle is a treasure. I don't think I've ever seen him turn in a bad performance and I think I've seen everything he's been in. I've put The Guard in my Netflix 'saved' queue, so thanks for the review!
1 Reply
1
Reply Mon 19 Sep, 2011 11:54 am
Speaking of Netflix...subscribers, check your email if you want to read a hilarious letter from Reed Hastings (the CEO). He starts out, "Dear IrishK, I messed up."

This was not a critical nor a popular success. I read wiki, not Rotten Tomatoes. According to wiki, the critics panned the two leads. I think the male lead, Alessandro Nivola, was largely cast for his looks. He's the sort of man who would have turned ladies' heads in the 1930s. I thought he was fine.

Alicia Silverstone was the female lead. I liked her performance. She was catty, energetic and teasing and handled the Shakespearean diction well. I thought the criticism was misdirected.

I did agree with the assessment that some of the veteran Shakespearean character actors were given roles that were too small. Richard Briers is practically Branaugh's repertory company and his role was tiny.

Adrian Lester and Nathan Lane were highly praised according to wiki. Well, Adrian looked better in his flying tails (love a man in tails) because he is a better dancer and is a little taller than the rest of the men. Not that there was anything wrong with his performance.

There is a play-within-a-play device here which was cut and replaced with Nathan Lane singing, "There's No Business Like Show Business." I like Nathan and he sang the song as a ballad -- I always associate that number with Ethel Merman, only not Ethel herself but with Martin Short imitating her -- but the song was really a poor fit.

Supposedly, many critics thought the end with the men going off to WWII but returning safely was jarring in the face of all the fluff. Huh? If you set the action in 1939, WWII is almost the elephant in the room.

The movie is rather short, which is good, considering how odd it is.

What I haven't said yet is that the play was adapted as a musical with great songs from the 1930s and plenty of dancing.
1 Reply
1
Reply Wed 21 Sep, 2011 03:42 am
@plainoldme,
The last film I saw was about a fortnight ago, 4 lions. It's a really brilliant comedy about a bunch of bumbling Islamic terrorists.

The acting is top drawer. Really liked William Holden although I can't fathom why his character was attracted to Faye Dunaway's loathsome character. Thought Peter Finch was amazing: he could look normal and absolutely loony.

What I want to know is why people didn't listen to the message? Corporate interests are blaming government and using people the way the corporations used poor mad Howard to stir up the Tea Party.
1 Reply
1
Reply Thu 22 Sep, 2011 01:27 am
@plainoldme,
That is a film I always meant to see, I will get round to it one day.
1 Reply
1
Reply Sun 25 Sep, 2011 06:55 pm
Just been to see "Killer Elite", what can I say, excellent movie.
Top notch cast, Robert De Niro, Clive Owen and Jason Statham.
Fast paced and loads of action, great film. Go see it. 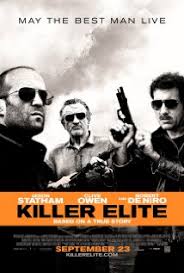 Storyline
Apparently based on a true story, Killer Elite pits two of the worlds' most elite operatives - Danny, an ex-special ops agent (Jason Statham) and Hunter, his longtime mentor (Robert De Niro) - against the cunning leader of a secret military society ('Clive Owen' ). Covering the globe from Australia to Paris, London and the Middle East, Danny and Hunter are plunged into a highly dangerous game of cat and mouse - where the predators become the prey.