What should be done about illegal immigration?

There is a very easy way to stop illegal immigration; make it illegal to hire illegals on any job in the US. If anybody hires an illegal, make the penalty very expensive - like $50,000 per illegal hire.


This does not work, in fact what it will do is make a black market. Any time you in act a penalty for a type of action or behavior it will ultimately lead to other crimes such as murder or trafficking or corruption of law enforcement.

Let's say a person who owns a business decides they are willing to take on some illegal immigrants. They are aware that there is a penalty or jail time if they do. What they will do is pass on those risks onto either the workers themselves or onto the customers of their product or services. That way if they get caught they can just use their proceeds to pay off their fines. However; there is also a case where they might murder to cover their tracks or retaliate towards a person who has turned them in. Blackmailing a person who owns a business with illegal workers. Threatening to turn them in if they don't pay up, these types of people end up killed. Or what will happen is some law enforcement officers will show up and blackmail these business owners to threaten to turn them in or give them some money to remain quiet.

The best solution is to just allow everyone and anyone in but they MUST apply for citizenship. Make it easy for them to apply. If they are willing to pay taxes like everyone else, then what's the problem? As it currently is, illegals get college, medical and security without paying any taxes. If you keep the system like this, it won't make things better. Besides you are also neglecting the part where people get paid a lot of money to transport illegals over the boarder. Some times they don't even care if they make it, so they typically charge up front for and often times they do it just to take advantage of the people who want to enter illegally.
1 Reply
1
Reply Mon 21 Jun, 2010 09:54 am
@Krumple,
So you would allow people like Osama Bin Ladin to become citizens?
2 Replies
-1
Reply Mon 21 Jun, 2010 10:35 am
@mysteryman,
mysteryman wrote:


This is an Appeal to Absurdity, not an actual logical argument against his position.


Well if you really want to ask me this, I say we already have Osama Bin Ladins already living in the US. I can't really tell the difference some times, who is who. So I would say, yes, anyone and everyone should be free to become an American citizen as long as they do everything that any citizen is required to do.

You do realize that Osama use to be the US's best friend right? The US helped finance the war against the soviets. Once we were done with Osama we decided to try and take him out of power but it failed. He got upset with that plan and retaliated. But a majority of Americans were duped by the US government to believe that the attacks were unprovoked. Osama is no different than what the US politicians have been doing in their countries for the past fifty or sixty years at least.
0 Replies
5
Reply Mon 21 Jun, 2010 10:57 am
We should keep in mind that the American Indian didn't control immigration. Look what happened to them.
1 Reply
1
Reply Mon 21 Jun, 2010 11:47 am
@Cycloptichorn,
No, its not an appeal to absurdity.
There are people that are barred from entering the US because of criminal records, or because they are considered a danger to this country.

An alien with a criminal record may be barred from admission to the United States. In general, among others, crimes of moral turpitude, drug offenses, multiple offenses, and engaging in prostitution or procuring prostitutes within the past ten years will be considered as criminal grounds and can make the alien subject to being barred from future legal admission to the United States.

The Preamble to the Constitution proclaims that the people of the United States ordained and established that charter of government in part to “provide for the common defence.” As Madison explained, “[s]ecurity against foreign danger is . . . an avowed and essential object of the American Union.” The Federalist No. 41, p. 269

Supporting Osama or his organization even if only verbally was ruled illegal today by the Supreme Court, the 3 leftists Breyer, Ginsburg, and the "wise Latina" dissenting http://www.supremecourt.gov/opinions/09pdf/08-1498.pdf
1 Reply
1
Reply Mon 21 Jun, 2010 12:09 pm
@electronicmail,
I'm a Tea Party activist and I hope this other insanity of the Federal courts like freedom-of-speech support for terrorist groups will be overturned by the Supreme Court very soon http://www.infowars.com/federal-judge-cites-voting-rights-act-to-rig-election-in-new-york-state/ 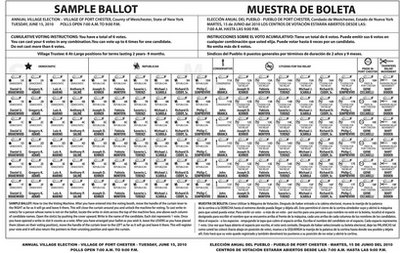 Election ballot from Port Chester, New York. The federal government has declared elections unfair in the city because residents have not voted for minority candidates.

The logic behind the measure seems a little shaky.

residents worry that jobs are going to illegal immigrants who they fear could drain community resources.

the city worries about the cost of defending the policy. The city has estimated the legal action would cost $1 million per year to fight — costs that would have to be covered by property tax raises and city job cuts.

The claim was made, by Teeny, that he had never served.
My only goal was to show Teeny that once again, she was wrong about someone.
Of course, she will never admit her mistakes, but that is her problem.
0 Replies
1
Reply Mon 21 Jun, 2010 01:54 pm
@Advocate,
Right wing??? No

Conservative??? Yes.
There is a difference.

And I am not a literalist.
I do believe that words mean things, and if you dont want people to misconstrue your meaning then you need to be more specific.

And by no stretch of the imagination am I dumb.
0 Replies
1
Reply Mon 21 Jun, 2010 01:59 pm
@mysteryman,
Honestly? I knew St. Ronald had been in a reserve Unit. Still, assigned to New York? REAL WWII soldiers laugh heartily at this. So Ask St. Ronald, "what was your MOS'? REAL soldiers would laugh their heads off! But, I digress. Better THAT service, then "I have better things to do, than serve, Cheney"!

Better, that Bush2, did something, than NOTHING, Cheney! You STILL haven't commented on the link I provided having to PROVE that American Blacks are TRUE Patriots! NO? You don't know JACK and accuse me of racism, in a majority white country! Thank you, LBJ!
1 Reply
1
Reply Mon 21 Jun, 2010 02:09 pm
@teenyboone,
If you knew he had been in a reserve unit, then you intentionally lied when you said he never served.
That doesnt help your credibility any.
And since he is dead, I cant ask him anything.

Are you also saying that if someone didnt serve in a combat unit, that they arent "real" soldiers?
You are aware that there are 10 support soldiers, (oh wait, you said they arent real soldiers), for every 1 combat soldier, arent you.

As for the link you claim you posted, you posted no links about black soldiers being patriots in any of your responses to me.
BTW, I never said that there were no black soldiers or that they werent patriots, and you know that.
As usual, you are trying to claim that I said something I never said.

BTW, you realize that Obama never served, but he has sent more troops to combat, right.
As a matter of fact, only 3 people in his whole cabinet, that includes him and Biden, ever served.
How can they claim to know how to lead if they have never served either?

There were 3 Units of Buffalo Soldiers during WWII. The 91st, 92nd and
93rd of the 371st. They were reactivated during WWII and yes, they referred back to the original Calvary Divisions, so famous in taming the West, after the Civil War. Dumb? You didn't do your homework before you opened that "yap" of yours. You and so many dumb-a$$ed, white Americans, who can only think John Wayne and Ronald Reagan were "real" soldiers, when they NEVER served!

From their newspaper, The Buffalo, which my mother so lovingly saved
in a scrapbook, she kept of my fathers writings home, I have living proof
of their efforts, so Google "Buffalo Soldiers of WWII" and find out for your ignorant, self!


So teeny, which unit was your father a member of in World War II? And again, those units referred to as Buffalo Soldier units in World War II were referred that way because they could trace their history back to the real Buffalo Soldiers, which were Cavalry units that fought indians. The name was given them by the indians that they had engaged in battle. I also served in the military, and was in the infantry, which probably had roots back to Cavalry units during the 1800's, but I cannot say I was part of a Cavalry unit fighting Indians, teeny.

By the way, I commend your father for his service. Besides my own service in the military, my Dad also served in the Pacific during World War II, and his brother was career military that served during the wars of World War II, Korea, and Vietnam.

By the way, thanks to Mysteryman "a dumb white American," for correcting your errors in regard to the military service of Ronald Reagan.
1 Reply
1
Reply Mon 21 Jun, 2010 07:53 pm
@electronicmail,
electronicmail wrote:


Without reading and concentrating more than I feel like, first of all I don't understand the questions exactly, and therefore do not have any good answers. In general, I haven't followed the BP oil problem closely. Overall there are some basic points that strike me. First point, accidents happen, and if hindsight were possible to redo this whole thing, perhaps it could have been prevented. BP is primarily responsible, but the government Dept. of Interior is also greatly responsible for making sure proper and safe drilling and production procedures are followed on all the leases they issue. Secondly, this proves the tremendous oil and gas reserves available, and if properly tapped and transported, the region obviously offers great potential for future development. Conclusion, fix the mess as best we can, learn from it, and move on.
2 Replies
1
Reply Mon 21 Jun, 2010 07:59 pm
@okie,
Thank you.
0 Replies
1
Reply Mon 21 Jun, 2010 08:06 pm
@Cycloptichorn,
Cycloptichorn wrote:


This is an Appeal to Absurdity, not an actual logical argument against his position.


Some liberal ideas and policies are in fact so absurd as to require equally absurd arguments and points to demonstrate the absurdity.
0 Replies