What made you gasp, frown or stare today?

Anything strike you about that?

Well, at least North Dakota's capital is called Bismarck...
0 Replies
1
Reply Mon 10 Apr, 2006 07:01 pm
There were a lot of French trappers in those territories before they became states, nimh. I bet that's where the names came from. Lemme check...

What made me frown: A fast moving thunderstorm that brought a good pelting of hail in with it. (Not a lover of storms)
0 Replies
1
Reply Sun 16 Apr, 2006 03:28 pm
At this wine-tasting festival downtown, where a stage was ready for the next music group, they were playing an intermezzo tune ...

.. it was a 1920s croony jazz-style rendition of ABBA's Super Trooper. <blinks>
0 Replies
1
Reply Mon 17 Apr, 2006 02:59 pm
There was a big, red, plastic watering can floating down the Danube. Right in the middle of that vast river, being tugged downstream with force.

I cant imagine anyone dropping a watering can into the Danube. It must have gotten dropped somewhere upstream, somewhere up some tributary. I wonder how far up...
0 Replies
1
Reply Tue 18 Apr, 2006 09:20 am
Friggin college says admissions will be announced at the end of March..... My entire life rides in the balance, but what the hell... I repress a multitude of emotions and wait.

The end of March, and they say...Oooohhh. We meant the freshmen applicants will know then.. You're a Transfer. Maybe toward the end of April....

Will she move here....will she move there? Can she take her beloved loyal companion, Jack, or will she have to have him stuffed and hope a good dousing will bring him to life later?

Will financial aid pay, or will she have to rent out her decidedly prickly womb for surrogate motherhood?

All I can think of is which shoes won't be too slick, so I won't slip. I am horrified. Hate the walking in front of people. Also, afraid if I stick bathtub slippies to bottom of shoes THAT will make me fall.

If I survive this month, it will be a miracle.

The residence is a favourite refuge for Berlusconi, who has entertained British Premier Tony Blair and Russian President Vladimir Putin there with evenings of song and tours of the cactus collection.


Radio Prague reports ... on The tragic story of the disappearing giraffes.

Thirty-one years ago last weekend, in the small Czech town of Dvur Kralove, a whole herd of giraffes was shot. Nobody was ever told why. This sounds like the opening of a Kafka novel, but it is a real event, and one that came to fascinate the British journalist JM Ledgard so much that he wrote a novel on the subject.

"The Czechoslovakian state, all the way up to the level of the Politburo, made it a state secret. So these giraffes were literally deemed not to exist any more. They were all of them shot, twenty-three of them were pregnant at the time, and they were literally liquidated."

But - there was equally typical (typical Czech, that is) civic courage, as well:

"[..] the interesting thing today is that still the Czech state has not come clean on the incident. My hope is - on the anniversary - that the Czech government will finally tell the zoo in Dvur Kralove, why the giraffes were killed, because, incredibly, every year since 1975, the zoo director had asked the Czech government, 'Why did you kill the larges herd of giraffes ever assembled anywhere in the world and yet I have yet to receive a single document in writing?'"

Every year! For fourteen years under the Communist regime alone, which did not look particularly kindly on such proactive citizenship...


Politicians have to exercise their best skills at kind platitudes when their officials leave, especially if it's at their own prodding...

Unfortunately, Bush has always been conspicuously hapless at feigning appreciation at such occasions. Notes the LA Times on Goss's resignation:

In brief remarks at the White House, Bush announced Goss' resignation and thanked him for instilling "a sense of professionalism" within the CIA's ranks.

"A sense of professionalism", at least. Well, that's something, anyway ... for the CIA. I suppose. In Bush's eyes.

("Instilling a sense of professionalism"?

. The CIA didnt even have a sense of professionalism, pre-Goss?)

"I've established a very close, personal relationship with Porter, which is very important for the director of the CIA," Bush said. "He's spent a lot of time here in the Oval Office. He's given me his candid advice. I appreciate his integrity."

Or: "He came in here all the effing time. Telling me about how he disagreed with me. I didnt listen to him."


The BBC reports that an "elite force" has been set up in the UK "to strengthen counter-terrorism and support special forces".

The newly established elite force has an insignia too. 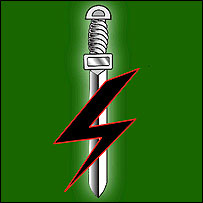 EDIT - wait, I gotta add this one as well.

This brilliant piece of election analysis in The Guardian:

"If it weren't for the fact that two years ago the Labour party had done equally badly, we would be talking about an unprecedented disaster," the elections expert John Curtice told Sky News.

Also, in other commentary, if Barcelona hadnt beat it in the semi-finals, Milan would be among the Champions League top 2!
0 Replies
1
Reply Sat 6 May, 2006 10:21 pm
realjohnboy wrote:

So...It is the end of April, Lash. What was the outcome?

I got an apartment Thursday, but have to complete Summer courses first.

I move to Athens in early August. (I only just now saw your post). Thanks for asking.

There haven't been all that many folk begging in the streets around where I live & shop, but from time to time there are. The other day I walked right past a crumpled, worried looking young man with a roughly printed message on a cardboard sheet in front of him .... then I decided, on second thoughts, to return (as I often do) with some money in my hand to give him. Except that now (just minutes later) the young man was chroming (inhaling paint fumes from a container in a paper bag). He looked so intent & desperate to suck whatever was in that bag into his lungs that I'm afraid I got an almost panicked feeling & walked straight past him in shock. He was in a terrible state. I wondered if I'd just stopped earlier & given him some money if I could have saved him a little dignity?
0 Replies
1
Reply Sun 7 May, 2006 01:51 am
Oy! I know just how you feel.


I am thinking of keeping some money in pockets for beggars.
0 Replies
1
Reply Sun 7 May, 2006 02:01 am
Not that money would have made much difference to this young man's life, Deb. He had such a doomed look about him ... He wasn't that much older than some students I teach. Terrible.
0 Replies
1
Reply Sun 7 May, 2006 08:25 am
He must not know we built a Parthenon in Athens in homage to our namesake.

(Now I gotta know what happened to those damned giraffes...)

Yesterday I was doing some errands, was at a really tricky "T" intersection, where the top bar was the VERY busy street I was trying to turn onto (no light, just stopsign for me and nothing for them) and I was on the vertical bar. Whipping my head back and forth, hard to see beyond parked cars. Nobody coming that way great f!ck someone coming the other way. Nobody coming the other way f!ck someone coming that way. People behind me, didn't want to linger too long, hate those old-lady drivers who take forever. In between head-whippings something started to register about the store right across the street from me. "Nude Men" probably caught my eye first, then "Full Monty", then "Nude Women", then (nobody coming that way f!ck someone...) is that a...? (nobody coming that way f!ck) I swear that's a totally naked woman sitting in the window display chatting on a cell phone!!

I continued to headwhip while trying to ascertain what the hell was going on best I could. Turned out that she was a quite voluptuous woman sitting cross-legged and leaning forward so that (I eventually determined) the pink short low-cut slip she was wearing was rendered virtually invisible -- just flesh on view, lots of it. Oh and very high heeled silver sandals.

I eventually made the turn.
0 Replies
1
Reply Mon 8 May, 2006 05:07 pm
Tanks in front of Parliament. The dull thud of shots being fired. People running, dispersing.


On call unexpectedly yesterday at work.....didn't have time to psych myself up.....and it was RAINING battered babies....as well as two little twin babies just raped by their daddy.


I can, actually, in a way, understand hitting a baby, when the person doing the hitting is some of the folk we see, because I can understand them. I mean, I can empathise with the desperation and comprehend why this person finds it so hard to deal with the feelings the situation evokes.

I am struggling with raping your baby, seeing what that did physically and emotionally to the baby, then doing it again to the next.

Didn't have much heart for much last night.
0 Replies