Forums: Weather, Science And Math, General, Science, Community
Email this Topic • Print this Page
1
Reply Wed 27 Oct, 2010 03:46 pm
So today I was enjoying looking back through the illustrator, artist, wit, Christoph Niemann's past drawing/painting-with-commentary entries on his new york times blog (called Abstract City, in the opinion section), and found this one on weather:

I think I won't just copy one part of it, as it all makes sense as a whole.

His work may be a whaddayacallit, acquired taste, but me, I'm a big fan.

If you end up liking his work, there are more links to his other subject matter to the right side of the page. I had a thread once about his Coffee drawings, and added a link to his "Unpopular Science - Whether we like it or not, human life is subject to the universal laws of physics " entry earlier today on Boomerang's Oddball thread.
0 Replies
1
Reply Wed 27 Oct, 2010 07:47 pm
a weather bomb
--------------------
sitting at the computer minding my own business ...
i thought a freight-train was rumbling through ...

October 27, 2010 — A weather bomb is still bringing wild weather to parts of Ontario with gusty winds being the biggest story. Find out what's left of this powerful storm.

probably will have to look for the garbage pail in neighbour's backyard tomorrow .
hbg
1 Reply
1
Reply Wed 27 Oct, 2010 07:58 pm
@hamburgboy,
I have been playing on-line scrabble this evening with folks from all around the U.S. In the chats, many are reporting severe weather in one form or another.
But they still beat me in the scrabble game.
1 Reply
1
Reply Wed 27 Oct, 2010 08:07 pm
@realjohnboy,
Is there some way I could get you to look at the Niemann post, Rjb? 3 posts back? 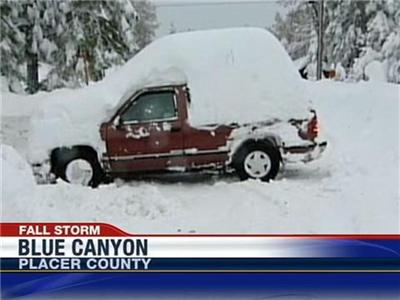 And this afternoon, a funnel cloud blew part of the roof off of a warehouse building and downed trees in Placerville.

A messy storm will dominate the Midwest during the last mad dash of pre-holiday travel. Low pressure and a cold front will head toward the Mississippi Valley while a warm front pushes northward into the Ohio Valley.

Snow will set up from the Dakotas to northern Minnesota and by late day western Upper Michigan. The heaviest snow will accumulate in northern North Dakota and northwest Minnesota with up to 10 inches possible. To blow and drift the snow, strong north-to-northwest winds in the Plains will gust over 40 mph at times.

With milder air initially streaming in aloft over the cold air across eastern Nebraska, Iowa, southern Minnesota and much of Wisconsin, a mixture of freezing rain, sleet and snow will make a dangerous glaze for travel.

As snow and wind linger in the Upper Midwest Thanksgiving, heavy rain will focus on the Ohio Valley as the cold front slowly moves through. Rainfall will be in the 1-to-3-inch range.

By Friday, the Midwest is dry except with Great Lakes and Ohio snow showers and rain mixed with snow ending in eastern Kentucky.

Cooler high pressure drops southward into the Carolinas and north Georgia Wednesday with clouds and a few sprinkles in the vicinity of the stalled front.

Far to the west, the next cold front lurks over Oklahoma and northwest Texas. Ahead of the southern Plains cold front, thunderstorms will develop in the warm humid air across eastern Oklahoma, northeast Texas and northern and western Arkansas. Some of these thunderstorms will become severe with damaging wind gusts, a few tornadoes and hail. Rainfall could locally top 1 inch.

Temperatures for most of the region will still be quite warm, varying from near average to as much as 25 degrees above average. Except for some highs in the 50s in North Carolina and some 60s across the Texas Panhandle, northwest Oklahoma, the Ozarks, central and eastern Tennessee, the remainder of the Carolinas and north Georgia, highs will peak in the 70s and 80s.

Come Thanksgiving, a corridor of heavy rain and thunderstorms will set up across the Tennessee Valley, lower Mississippi Valley and east Texas. A few severe thunderstorms are possible. Rainfall could locally top 3 inches.

The rain will shift into the Southeast Friday, ending from west to east later in the day.

The weekend will be dry and the temporarily colder temperatures will quickly return to average or above-average levels.
Northeast | View Regional Video

A storm will rapidly intensify over the Canadian Maritimes while high pressure builds in from the Great Lakes and Ohio Valley on Wednesday.

Strong northwest winds will develop over eastern New York, north Jersey and New England. Gusts will peak in the 35-to-50-mph range. The eastern Mid-Atlantic will be breezy.

Except for any air travel delays from the wind, getting around should be fine. Wednesday will be dry with only a few snow showers over northern New York and the mountains of northern New England.

Temperatures cool but only to near-average or slightly-below-average levels. Highs will range from the upper 20s and lower 30s along the Canadian border to near 60 in southwest Virginia.

Rain arrives for Thanksgiving across much of New York, the northern Mid-Atlantic and West Virginia. A few colder valleys in northern Pennsylvania and Upstate New York may deal with a brief period of freezing rain.

On Friday, the next cold front moves through with rain changing to snow from the Appalachians westward and rain east of the mountains. The precipitation will end from west to east, especially across the Mid-Atlantic.

By Saturday, the only remaining precipitation will be confined to lake-effect snow showers in Upstate New York and northwest Pennsylvania and snow showers across northern New England. Temperatures, though colder, will only be slightly below average.
West | View Regional Video

As the last major chunk of the prolonged Western storm ejects into the Plains Wednesday, the Great Basin and Far West will finally be dry while the snow will diminish and then gradually end across the Rockies and northern high Plains. Gusty winds over parts of the high Plains could locally gust over 40 mph in places like southeast Wyoming.

Meanwhile, a very weak disturbance could bring a few flurries and sprinkles to coastal Oregon.

Temperatures will be very cold for most, varying from 10 to over 40 degrees below average. Only across eastern New Mexico will temperatures stubbornly but pleasantly remain above average.

Across the interior West, lows midweek will be near or well below zero from the Cascades, Sierra and Great Basin to Montana and much of Wyoming.

Highs midweek will range from near zero in Montana to the teens in the Great Basin, 30s in western sections of Washington and Oregon, 40s and near 50 in the Central Valley of California, 60s southern Arizona and 70s southeast New Mexico.

The West will be dry and cold for Thanksgiving.

then the temps started to go up

which would be fine

btw eastern end of lake ontario is frozen over slightly - no one skating on the lake yet .
1 Reply