This is Biden's America

Biden has said that we are going to have to endure high gas prices until after he succeeds in giving Putin a sound drubbing.


Yeah right. Can you say "scapegoat"? Not loudly enough, because this is what he also said, but nobody heard him, at least none of you.
https://nypost.com/2022/05/23/biden-praises-gas-prices-as-part-of-incredible-transition/
That right, he is deliberately helping raise the gas prices by supporting bad policies to persuade (force) you to switch to electric.

He will never seriously fight Putin, cuz then he will need a new scapegoat. But he might be more than happy to risk the lives of patriotic Americans on a war that doesn't mean a damn thing. 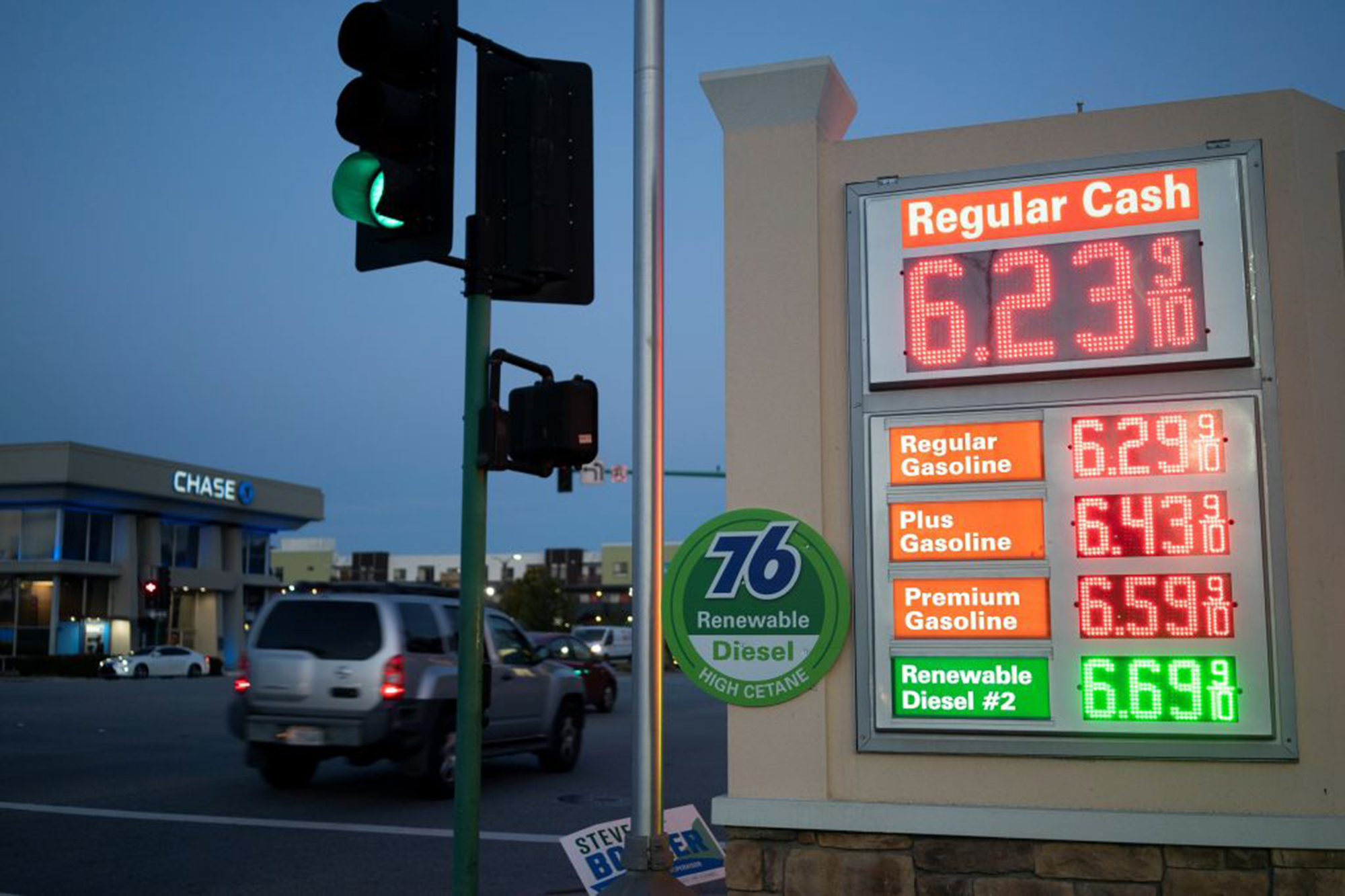 0 Replies
1
Fri 1 Jul, 2022 07:56 pm
Is Biden rewarding Manchin for blocking his so-called agenda or does he have a method of persuasion working here? 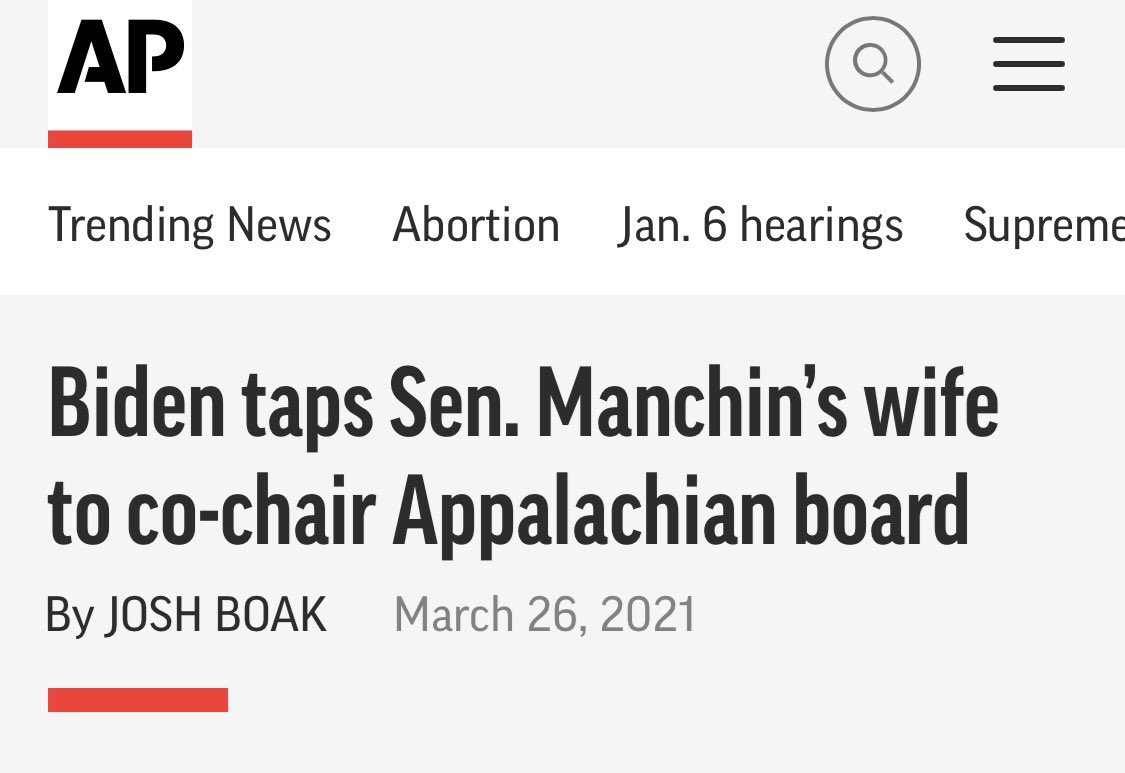 1 Reply
1
Fri 1 Jul, 2022 09:55 pm
President Joe Biden struck a deal with Senate Minority Leader Mitch McConnell to nominate Chad Meredith, a Republican anti-abortion advocate, to a federal judgeship on the Eastern District of Kentucky, Slate has confirmed. Under the arrangement, Meredith would take the seat currently occupied by Judge Karen Kaye Caldwell, a George W. Bush nominee. Caldwell submitted her move to senior status on June 22, which, once complete, will allow Meredith to take the seat. A lawyer with connections to the Kentucky governor’s office who is familiar with the agreement told Slate that Caldwell conditioned her move upon the confirmation a successor—specifically, the conservative Meredith. In exchange, McConnell will allow Biden to nominate and confirm two U.S. Attorneys to Kentucky.

Maybe an anti-abortion type would buy that kinda deal, but no thanks. Roe vs Wade was not a legitimate ruling, abortion is a state issue. Just as gay marriage is a state issue. Or in fact, a religious issue. Leave it up to the pastor, imam, or otherwise (not the government's business).

Here's what happens in that kinda "deal". There are nine justices, right? Yeah that's good. You should not have a tied court. Nope, no wait, one is dead. So you get one anti-abortion judge, which is relevant maybe 1% of the time (and that's if the guy isn't a freaking RINO), in the meantime, Biden stuffs the Supreme Court... Oh nvm, this is Kentucky. Yeah **** Kentucky.

If you ask me (what do you mean, "I didn't ask you"), Supreme Court should be free of presidential meddling. The potential for stuffing the Court is too great. In fact, for the checks and balances system to work, each branch of government must work differently. Which reminds me....
https://able2know.org/topic/571366-1

Up to District Courts: Hired as judges, rise through the ranks internally.
Circuit Court: Drafted similar to the way that potential jury are picked (I mean from existing judges)
State Supreme Courts: One is appointed by President per term (meaning, during eight years, he is limited to two). The rest are picked internally from existing judges.
US Supreme Court: President has absolutely no input, aside from the fact that US Supreme Court usually consists of former State Supreme Court justices. But there should at all times be nine justices. No more, no less. Moreover, they should be chosen (internally) based on their decisions, like a living scale. That is, 4 conservatives, 4 liberals, and 1 as tiebreaker. The tiebreaker should be able to be ditched easily if they are not impartial enough.

Cabinet: Appointed by President
Vice President: Appointed by President (President is given a list of potential candidates)
President: Should not be elected. You ever seen the Powerball system? Numbers are chosen at random. How is this relevant? Well, the machine spits out social security numbers. Then it checks if the person is alive or not, whether they are eligible, and if so, asks if they actually WANT the job. If any of these is not so, they do another drawing. The machine is checked scrupulously for things like magnetic paint or weighted balls, but honestly, you get a totally random president.
Btw, there is no succession between President and Vice President. The Vice President only acts as Acting President for the rest of the term. Things that an Acting President cannot do are shelved as future agenda, unless there is an emergency (e.g. America is invaded).
You're probably wondering, "Why do this? Isn't the system of voting fine?" No, no it's not. It's a popularity contest based on advertising and false perception. Besides, you get the most driven and ambitious person. Exactly the most dangerous leader for a country. "If elected, I want to build a giant wall across America" or " If elected, I want to keep people in lockdown forever, and push electric carson people who can't afford more than a gas-guzzling clunker. " These people have entirely too many plans! And they are invariably part of the establishment. We'd be better off with a person who knows they have no idea what they are doing and has advisors, than a cocksure asshole who thinks they know what they are doing. But the people do get a say. We have a process similar to the current election twice (once at the first midterm and once after four years for re-election), only here there are two candidates. President Example, and Redraw. That is, do you vote to keep this person?

You may ask, "Where is the checks and balances? Each is independent of each other." Exactly . The last thing you want is for one section to be able to "buy" the others. For them to interfere with each other, they have to be free from any sort of meddling. They check and balance each other by meddling in each other's work, but none of them should have oversight in their election.
0 Replies
0
Sat 2 Jul, 2022 08:24 am
Danny Haiphong
@SpiritofHo
·
12h
BREAKING: 7 of 10 Americans do not want Joe Biden to run for reelection in 2024 according to a Harvard CAPS–Harris Poll survey.

A majority want an independent candidate instead, backing up data that Americans would support a third-party if available to th
1 Reply
1
Sat 2 Jul, 2022 01:52 pm

Ironic Icons Art
@Ironic_IconsArt
·
11m
Everyone screaming for
@POTUS
to expand SCOTUS should realize that he's appointing an ANTI-ABORTION federal judge right now. What kind of "bipartisan" justices do you think he'll nominate?
1 Reply
-1
Sat 2 Jul, 2022 03:37 pm
Power To Control
@Power2Control
When democrats tell you SCOTUS judges lied under oath, it was up to democrats to look at their actual history to see if what they said matched up with their actions
0 Replies
-2
Sat 2 Jul, 2022 09:59 pm
@edgarblythe,
It should dawn on you by now that a president will to do anything and give anything to get what he wants (the classic sign of a sociopathic exploiter) should not be trusted to give you what you want. Just as they can make false deals for your enemies, they may have been dealing falsely with you. On the other hand, Trump has never lied about what he wants to do. If you then are his allies (or as at least not his foes), how much much genuinely good will he treat you?

If not, I guess you're pretty blythe about all this.
0 Replies
1
Sat 2 Jul, 2022 10:33 pm
Ross Perot showed it is possible for an independent to be elected president. If he had the acumen to develop on what he began with, it was entirely possible. Only after settling for a less than adequate running mate and making egregious blunders did the possibility of it vanish. I would love to see Bernie go that route and take along a running mate such as Cortez or Nina Turner.
0 Replies
3
Sun 3 Jul, 2022 03:32 am
It looks as though Edgar's determination to stop any Democrat from beating whomever the Republicans choose as their presidential candidate in 2024...has accelerated to the point where his suggestions are now going from laughable to belly-hurting laughable.

Now he wants Bernie Sanders to team up with AOC and run as Independents in that election.

There is no way Edgar truly thinks that would be a winning strategy...and many reasons to think it is a strategy that would insure a massive defeat for the Democratic Party candidate. Any intelligent, sane person would see it that way.

So we are left with the suspicion that Edgar has affection for the Republican Party; the GOP notion of governance; and its most likely candidate at the moment, Trump (or a Trump look-alike.)

Tough to be sure why Edgar has such high regard for the Republican Party and its machinations...and for people like Trump. But in his defense, I will acknowledge that it is not an uncommon sickness.
0 Replies
1
Sun 3 Jul, 2022 05:31 am
Obama put it more succinctly than I or anyone else could when he told a fellow Democrat, "Don't underestimate Joe's ability to **** things up."
0 Replies
0
Sun 3 Jul, 2022 05:41 am
Nina Turner
@ninaturner
·
5h
Holding people in power accountable isn’t dangerous, it’s democracy.

Republicans are worse—we know this.

This idea that criticism=attack is undemocratic.

Also, most progressives are pleading for Democrats to act, we aren’t attacking anyone.

The only thing that’s dangerous is Democrats gaining power in 2020 and not doing as much as they can with it.

I do note, however, that supposed Democrats who have decided to help the Republican attempts to recover the White House (or at least hamper Democrats from stopping the GOP from doing so)...are every bit as good as they at rationalizing their contrarian actions.
0 Replies
2
Sun 3 Jul, 2022 08:46 am
Independents make up 43% of American voters, yet less than 1% of our Senate and not sure if any are in the House. We are disenfranchised while at the same time being the largest block of voters. Independents (43%) v Ds or Rs (tied at 27% each)

The Republicans and American conservatives are willing to swallow their pride (such as they have any) and defend an abomination like Trump...a classless, shyster, moron who attempted to steal an election as an incumbent...while the Democrats and liberals are excoriating a decent man like Joe Biden...on the basis of lack of lack of skill and capability...when the alternative is ******* Donald Trump!!!! 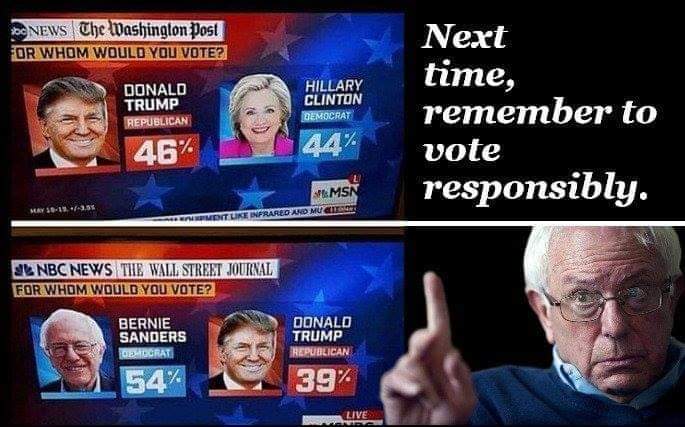