A new study by academics at the School of Business and Economics and The University of Sheffield, and economic consultants at Economic Insight, seeks to provide a more statistically robust approach to the question: “How many deaths in England and Wales are due to COVID-19?”.

Actual deaths due to COVID are some 54% or 63% lower than implied by the standard excess deaths measure, and reported excess deaths likely include a significant number off non-COVID deaths.

While it is well known that COVID deaths are concentrated in the elderly, the study finds them to be particularly acute in the very elderly (75-84 and 85+ years old).

Over the lockdown period as a whole Government policy has increased mortality rather than reduced it.

Studies have shown that one out of every three covid-deniers is just as stupid as the other two.

Well, ok, bring those studies on!!!


Why can't people wrap their head around the FACT that the whole COVID-19 nonsense is just that, nonsense!

In UK they may now destroy buildings, airplanes, cars etc if there was a virus.


The insanity has reached new levels!!! And I don't think we have seen anything yet!
0 Replies
4
Reply Sat 8 Aug, 2020 06:15 am
@cherrie,
I love that line. Our Mr Palanre is a well known "man of mdeicine". He has a substantial laboratory of casava rattles, and books of medical curses
0 Replies
-4
Reply Sun 9 Aug, 2020 08:50 am
The people behind the Covid-19 hoax, also want to cull the elderly.
That is one of the things on their agenda.


Right out of the mouth from one of the Toddlers

I can tell now they have suceeded.
They have , DELIBERATELY, killed a lot of the elderly! 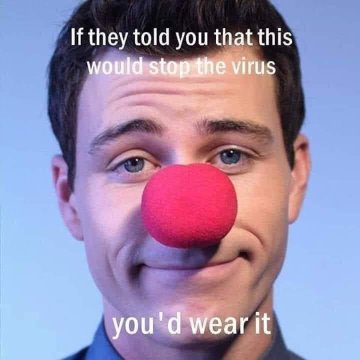 The report, published by the American Academy of Pediatrics and the Children's Hospital
Association, said in those two weeks, there was a 40% increase in child cases across the
states and cities that were studied.

Is there no one wondering why the whole damned thing changed from
"DEATHS" to "TESTED POSITIVE." ?????

Oh that is right! The DEATH rate is lowering, so they can't scare the people with that!

So, now they use "tested positive" with a test with a false positive of 80% !!!!
Maybe that will scare the idiots.

The same they did with "Global warming" , When the temperature didn't rise anymore, the scare was labeled "Climate Change"


It is all so bloody obvious!

And the head of the W.H.O, Director General: Tedros Adhanom Ghebreyesus.
is a war criminal, the Minister of Health for the DERG, who killed millions in Ethiopia in connection with created crises and the imposition of so-called aid.

Just the exact criminal you need for the covid-19 scam!!!

0 Replies
3
Reply Mon 10 Aug, 2020 01:56 pm
@engineer,
you realize that conspiracists just love alternative "facts". Even if they are scientifically unverifiable. and evidence -free.

Then, many of these clowns will NOT accept vaccination when its available.

London face mask protests: Hundreds of people, some wearing...
edition.cnn.com/2020/07/20/uk/london-face-mask-protest-gbr-intl/index.html 2020-07-20
Hundreds of people gathered in London on Sunday to protest against the wearing of face masks, days before it becomes mandatory to wear face coverings in stores in England.

https://www.news-medical.net/news/20200707/Many-in-the-UK-would-refuse-a-coronavirus-vaccine-survey-finds.aspx
Some will not get the vaccine
Now in disconcerting news, a new survey in the United Kingdom from the Center for Countering Digital Hate (CCDH) reveals that a significant amount of people in the United Kingdom, the European country with the highest number of infections, would either not have a coronavirus vaccine or were not sure if they would get one.

The YouGov conducted a poll from June 24 to 25, on behalf of the researchers at CCDH found that based on the poll of 1,663 people, a third of people would not likely get a coronavirus vaccine.

It’s insignificant, every country has its nutters, so what if a few hundred descended on the capital. No wonder it wasn’t reported, it wasn’t news.

As for your other source, I am naturally very sceptical about a UK polling company that spells centre center.

Having said that it’s quite vague and makes huge leaps in logic, assuming those who said they probably wouldn’t get the vaccine are anti Van religious types like you have. It demonstrates no understanding of British culture at all.

Obviously a certain proportion of any population are anti vaccine nutters, see my earlier point. They don’t make up a third of the population. That’s nonsense.

You don’t understand our culture. Getting a vaccine is hassle, you’ve got to make an appointment, then you’ve got to go there and be injected, and nobody likes that. And if the Covid 19 vaccine is anything like other vaccines there’s every likelihood you could be unwell for anything up to a week.

Bearing in mind the job situation right now I can understand why someone young and healthy in a low risk group might decide not to bother.

I’m not saying I won’t get vaccinated, I will. I’m not saying they’re right, I’m practising empathy, something you seem incapable of which is why you see things in such extremes.
1 Reply
-4
Reply Mon 10 Aug, 2020 08:40 pm
How can a vaccine be made for a virus that doens't even exist?

0 Replies
4
Reply Mon 10 Aug, 2020 09:56 pm
We've all seen this style before.....somebody is either on an involuntary unscheduled vacation or is trying to sneak back in before his/her timeout is over. But really, who cares...this person is terribly anti-social and somewhat annoying, it's easy enough to ignore just by clicking on his name. His contributions are of no value, but by responding to him all you accomplish is stoking his paranoia and inflating his vainglorious ego. In normal times it's easy to ignore/shut out unhinged claptrap...sometimes it's amusing.....but the entire globe has been fighting a pandemic, and the US is so far behind the curve because the President has installed inept suck-ups to replace seasoned experts.......we are all unnerved and the lunatics are flourishing...........lets not encourage the unhinged.
0 Replies
0
Reply Mon 10 Aug, 2020 10:42 pm
@izzythepush,
You are right I have zero empathy for anyone who consider that due to them being on the young side they do not need to get vaccine as the hell with their older family members or their older neighbors they might give the disease to.
1 Reply