But there is something “mysterious” going on in Africa that is puzzling scientists, said Wafaa El-Sadr, chair of global health at Columbia University. “Africa doesn’t have the vaccines and the resources to fight COVID-19 that they have in Europe and the U.S., but somehow they seem to be doing better,” she said.

Fewer than 6% of people in Africa are vaccinated. For months, the WHO has described Africa as “one of the least affected regions in the world” in its weekly pandemic reports.

Some researchers say the continent’s younger population — the average age is 20 versus about 43 in Western Europe — in addition to their lower rates of urbanization and tendency to spend time outdoors, may have spared it the more lethal effects of the virus so far. Several studies are probing whether there might be other explanations, including genetic reasons or past infection with parasitic diseases.

On Friday, researchers working in Uganda said they found COVID-19 patients with high rates of exposure to malaria were less likely to suffer severe disease or death than people with little history of the disease.

Seven anti-vaccine doctors fell sick after gathering earlier this month for a Florida “summit” at which alternative treatments for Covid-19 were discussed.

“I have been on ivermectin for 16 months, my wife and I,” Dr Bruce Boros told the audience at the event held at the World Equestrian Center in Ocala, adding: “I have never felt healthier in my life.”

Littell, an Ocala family physician, also told the Daily Beast six other doctors among 800 to 900 participants at the event also tested positive or developed Covid-19 symptoms “within days of the conference”.

Littell raised the suggestion the conference was therefore a super-spreader event but rejected it, vehemently saying: “No.

“I think they had gotten it from New York or Michigan or wherever they were from,” he told the Beast. “It was really the people who flew in from other places.”

He also said: “Everybody so far has responded to treatment with ivermectin … Bruce is doing well.”

The Beast said sources close to Boros said he was gravely ill at his Key West home.

Ivermectin is an antiparasitic which has uses in humans but is predominantly used in livestock such as cows and horses. Authorities say it has no proven use against Covid-19 and can be dangerous if taken in large quantities. The US Food and Drug Administration has not authorized or approved ivermectin as a Covid treatment and has said clinical trials are continuing.

Boros has claimed ivermectin is “working where it’s being used around the world” as a Covid treatment.

In the same Facebook post, he condemned Dr Anthony Fauci, Joe Biden’s chief medical adviser, as “a fraud” and said “big pharma is playing us for suckers”.

In a July interview with Florida Keys Weekly, Boros responded to criticisms of his post, saying: “It breaks my heart that a town like this has made something so political and hateful. What’s wrong with people? I just want to help patients and keep them from dying.”

He also claimed that he gave a seriously ill Covid-19 patient ivermectin and “within six hours he was talking without coughing”.

At the summit in Ocala, Boros criticized his 97-year-old father for getting a Covid vaccine, saying: “He had been brainwashed … He got it. He didn’t tell me. I was very upset. I wanted to give him a spanking. He got both jabs.”

Earlier this year, a significant study supporting ivermectin as a Covid-19 treatment was withdrawn after data was found to have been falsified and patients nonexistent.

The FDA says people should “never use medications intended for animals on yourself or other people. Animal ivermectin products are very different from those approved for humans. Use of animal ivermectin for the prevention or treatment of Covid-19 in humans is dangerous.”

Seven anti-vaccine doctors fell sick after gathering earlier this month for a Florida “summit” at which alternative treatments for Covid-19 were discussed.

“I have been on ivermectin for 16 months, my wife and I,” Dr Bruce Boros told the audience at the event held at the World Equestrian Center in Ocala, adding: “I have never felt healthier in my life.”

Littell, an Ocala family physician, also told the Daily Beast six other doctors among 800 to 900 participants at the event also tested positive or developed Covid-19 symptoms “within days of the conference”.

https://amp.theguardian.com/us-news/2021/nov/23/florida-doctors-covid-coronavirus-bruce-boros
0 Replies
3
Reply Tue 23 Nov, 2021 04:31 pm
Yeah, that made me laugh when I read that. I bet there are others who just won't admit it.
1 Reply
3
Reply Wed 24 Nov, 2021 12:08 pm
@Mame,
A German football ("soccer") star's behaviour started a fiery debate in Germany a month since the footballer revealed he opted not to be vaccinated against COVID-19.

Kimmich revealed he decided against being vaccinated, despite having founded the 'We Kick Corona" charity last year.
"It's not that I'm a denier of the coronavirus or an opponent of vaccination," said Kimmich, who based his decision on "personal concerns".

He missed several team and national matches - since he had to quarantine three times due to contact with infected persons.

Today it was confirmed that he's in quarantine again ... because he was now tested positive.
1 Reply
2
Reply Wed 24 Nov, 2021 12:40 pm
@Walter Hinteler,
Idiot.
1 Reply
3
Reply Wed 24 Nov, 2021 12:51 pm
@Mame,
Especially, because he's one of Germany's superstar football players, a role model.
And not to forget: he supported charities that help people struggling during the coronavirus pandemic.

It’s easy to talk about actions and consequences (with the millions he earns, he won't notice that his wage is docked during the quarantine period), but maybe the infection will now convince others from the anti-vaccination scene.
2 Replies
3
Reply Thu 25 Nov, 2021 01:59 am
@Walter Hinteler,
Germany has recorded a total of 100,119 deaths amid a resurgence of the virus and tough new restrictions.

And there's quite a dramatic situation in our hospitals! 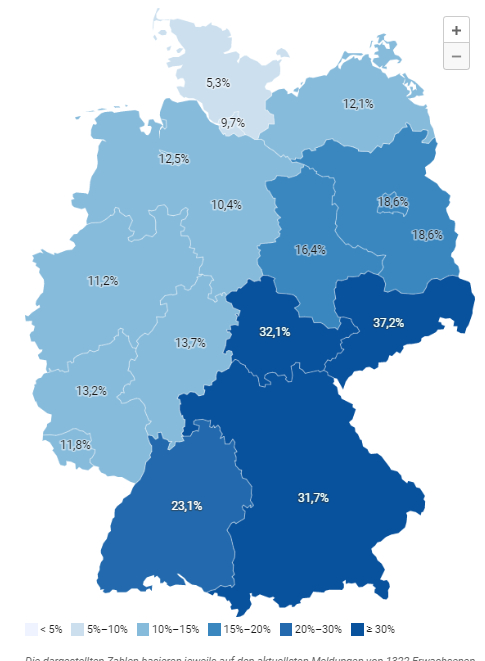 Beds in ICUs occupied by Covit-patients in German states 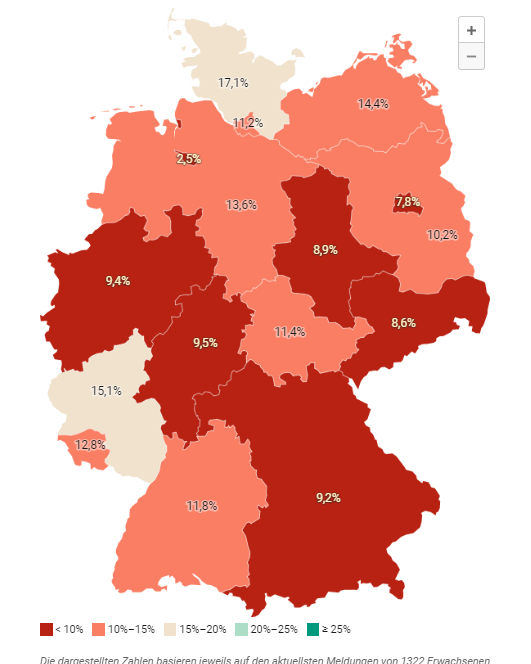 Edited: we actually do have more ICU beds and equipment - but not the staff.
0 Replies
1
Reply Thu 25 Nov, 2021 10:37 am
@Walter Hinteler,
It nice to know that the US is not the only home for complete idiots.
1 Reply
2
Reply Thu 25 Nov, 2021 11:11 am
@BillRM,
No, it certainly isn't - Rotterdam had those stupid riots, Austrians are furious about their new lockdowns - protests are going on all over the place. Thankfully, ours have stopped. Pretty pointless, if you ask me.
0 Replies
2
Reply Fri 26 Nov, 2021 05:06 am
Due to the impending overload of the health care system in some regions, the air force is now helping to distribute patients within Germany. From Friday afternoon onward, the armed forces are to participate in the transfer of intensive care patients in the corona pandemic with special aircraft (Airbus A310 MedEvac).

The government of my state (North Rhine-Westphalia) wants to have scheduled operations in hospitals postponed to accommodate corona patients from other states. The cabinet passed a corresponding ordinance in a special session on Friday morning,
1 Reply
3
Reply Fri 26 Nov, 2021 05:58 am
@Walter Hinteler,
Walter Hinteler wrote:

The cabinet passed a corresponding ordinance in a special session on Friday morning,

Our "Landtag" (state parliament) cleared the way for this in a very rare unanimity in the fast-track procedure.
0 Replies
1
Reply Fri 26 Nov, 2021 06:47 am
Brent Oil Sheds Almost $5 as New Covid-19 Variant Roils Markets
Oil fell sharply as a new Covid-19 strain raised concerns about the outlook for demand and sent global markets spiraling.

Futures in New York tumbled toward $73 a barrel and benchmark Brent shed as much as 6%, the most since July. The emergence of the new strain has seen several nations curb travel from South Africa and some neighboring countries and a World Health Organization Panel is set to consider whether it is a variant of concern. Global markets sold off heavily, as traders fled to haven assets.

May not need to release oil from the Strategic Petroleum Reserve after all.
0 Replies
1
Reply Sat 27 Nov, 2021 09:14 am
Pfizer Vaccine Being Tested Against Omicron Variant

Testing has begun to determine whether the Pfizer vaccine protects against a mutant strain of Covid-19 that first appeared in South Africa and has already made its way to East Asia and Europe, the Financial Times reports.

COVID pill is less effective than had been thought

Drug maker Merck and its partner Ridgeback Biotherapeutics released data Friday showing their experimental pill to treat COVID-19 is less effective than early clinical trials predicted, a finding that emerged as the Food and Drug Administration raised questions about the drug.

Molnupiravir, a pill that could be taken at home, had shown promise in cutting the risk of hospitalization and death by half among high-risk patients in data released by the company in October. But according to the latest findings Merck presented to the FDA, the pill reduced the risk of hospitalization and death only by 30 percent, instead of 50 percent, as initially estimated.

The study by the drug makers found that, among participants receiving the pill, just one participant died during the trial, compared with nine deaths in the placebo group, the companies said in a news release Friday.

‘‘It’s still a 30 percent effect, which is still good for a high-risk population,’’ said David Boulware, an infectious-disease physician and professor of medicine at the University of Minnesota Medical School who was not involved in Merck’s research. ‘‘It’s better than zero, and it’s a starting point, but it’s a little bit more modest.’’

The FDA on Friday asked a panel of expert advisers to weigh the benefit of reduced hospitalizations and deaths in high-risk patients against potential risks associated with the drug. Because Merck and Ridgeback presented new clinical trial data to the agency after FDA scientists completed their review, regulators said their analysis may change ahead of a Tuesday meeting to consider the scientific evidence on the drug.

‘‘The review issues and benefit/risk assessments may therefore differ from the original assessments provided in the briefing document which was based on the interim analysis,’’ an addendum to the FDA briefing materials said.

Merck and Ridgeback are seeking emergency-use authorization for their COVID treatment, which would become the first easy-to-use pill to thwart the virus. The FDA advisory committee is expected to make a recommendation Tuesday, and agency officials typically follow the guidance of the advisers.

The agency reviewed data presented by the companies and determined that the clinical trial identified ‘‘no major safety concerns’’ related to adverse events. The most common side effects were mild to moderate diarrhea, nausea, and dizziness. Still, the FDA identified several areas of concern, including potential risks for pregnant people and the possibility the drug could cause the coronavirus to mutate.

Los Angeles Times: “A small study that’s among the first to track people’s protective antibodies over time found that those who were immunized against COVID-19 with two doses of an mRNA vaccine and received a booster shot about eight months later saw their levels of neutralizing antibodies skyrocket.”

“Among this group of 33 fully vaccinated and boosted people, the median level of these antibodies was 23 times higher one week after the booster shot than it had been just before the tune-up dose.”

“What’s more, their median post-booster antibody level was three times higher than was typical for another group of people whose antibodies were measured a few weeks after getting their second dose of vaccine, when they’re close to their peak. And it was 53 times higher than that of a group of 76 unvaccinated people who had recovered from COVID-19 just two to six weeks earlier.”