Who is not a Nazi? Examining four decades of American politics.

Forums: Us Politics
Email this Topic • Print this Page
Reply Mon 16 Sep, 2019 11:06 am
Each of our past 6 presidents has been a Nazi (according to a not insignificant number of politically active Americans). Major social and political movements; feminism, the NRA, both sides of the abortion debate, both sides of the gay marriage debate, religion, atheism, oil companies, environmentalists, meat eaters, and the medical establishment... all nazis.

I was thinking... are there any American public figures or political movements that aren't nazis?
Type: Question • Score: 0 • Views: 512 • Replies: 15
View best answer, chosen by maxdancona 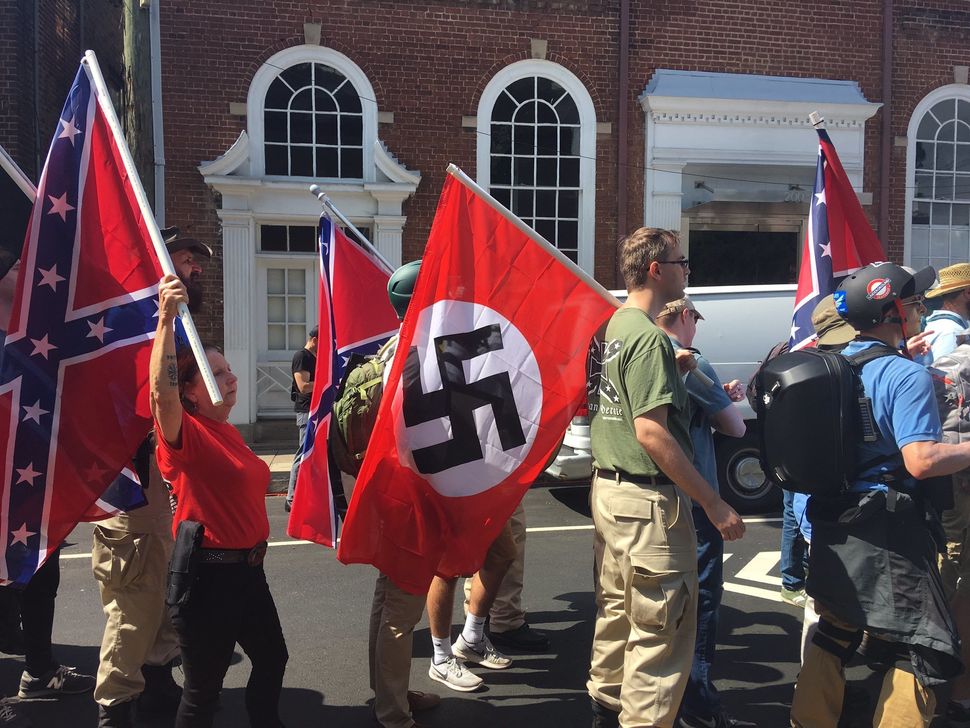 These guys in Charlottesville with the Nazi flag are widely regarded as Nazis, but not by you. You're so desperate to score some sort of points that you've reached the ridiculous position of calling everyone Nazis except the real thing.

Hitler probably wouldn't have been a Nazi according to you.
1 Reply
0
Reply Mon 16 Sep, 2019 11:15 am
@izzythepush,
Yes, people walking around with swastikas are actually Nazis. Barack Obama was not an actual Nazi. Hopefully you can see the difference.

The word nazi should not be used just because you disagree with someone.

Yes, people walking around with swastikas are actually Nazis.


Finally you admit it. It only took you two years.
0 Replies
0
Reply Mon 16 Sep, 2019 11:23 am
This is from the Bernie Sanders thread and it is perfectly illustrative of the issue.

You're not the only one who feels that way, other Nazi sympathisers feel the same.

There was a thing called the Holocaust, millions of innocent people were murdered by the Nazis. If you don't oppose that then you're no better than those who want to bring it back.

The basic line of argument he is making is.

The last sentence is really the icing on the cake.

What's indicative is that you said Sander's supporters were nastier than Nazis.

You also said that opposition to Nazis is an extreme viewpoint.

- It was you who brought up Nazis on that thread.

- I have never gotten daily multiple voicemail spams from Nazis.

- I did say that opposition to nazis is an extreme viewpoint. I assume you are smart enough to understand the point I am making. I stand by that point.

You're trying to play word games but you lack the necessary skills. You're trying to go right up to the line, but your clumsy prose lets you down, and you end up actually saying what you mean.

It's not so easy being a control freak when there's a record of what you've said, makes gaslighting very difficult.

If I understand your argument correctly you are saying that since people were wearing red hats at Charlottesville, and there were Nazis at Charlottsville therefore people who wear read hats are nazis.

I don't accept this line of reasoning.

1 Reply
1
Reply Mon 16 Sep, 2019 12:02 pm
I am very careful with how I use the word "nazi". I think it should be used very sparingly. If the word Nazi simply means "someone I disagree with" we are trivializing history.

There are two ways I will call someone a nazi.

1) If they specifically identify with the Nazi party. Someone who wears a Nazi swastika or praises Hitler is a Nazi.

2) If they directly call for the death or expulsion of a racial or ethnic group.

In my opinion, the word Nazi should not be used in any other circumstance.

0 Replies
5
Reply Mon 16 Sep, 2019 12:56 pm
@maxdancona,
We don't have fire trucks over here, we have fire engines. And they are all bloody red, at least when the fire brigade are driving them.

And now you're reduced playing logic games. I don't go for your cheap parlour tricks. We had already established the link between MAGA supporters and neo Nazis when you gave your little utterance.

You were cross, and not fully in control, as is evidenced by your spiteful little post about the UK. When you're cross you lash out, try to go for a bit of shock value so you posted something you knew would cause offence.

Now you've had time to think about it you've changed your mind, but you're desperate to save face so you resort to these silly little logic games. Whether all MAGA wearers are Nazis is not the point. What's important is what you meant when you posted your preference of them.

And considering that we'd only just been talking about neo Nazis it's inconceivable that you meant anything else. This is what I wrote, and it's what you replied to. I've bolded up the important bits

You're seriously saying that Sander's supporters are worse than the swastika wielding neo Nazi Trump supporters who marched through the streets of Charlottesville and murdered Heather Heyer.

Actually, what I said is that Bernie supporters aee more nasty, self-roghteous and divisive.

Yes, I am seriously saying that.


It's quite pathetic having to pick over the bones like this. Why can't you just be honest for a change instead of constantly trying to respin things in your favour and dragging arguments from other threads.
1 Reply
-1
Reply Mon 16 Sep, 2019 02:09 pm
@izzythepush,
Quote:

It's quite pathetic having to pick over the bones like this.

Bingo... you get the red ribbon.

You and I are on the same side here. In this thread, I am suggesting that anyone who is outside of your ideological bubble is a nazi. That is exactly what you are arguing.

Not we're not Max, you're trying to make a wholly unnecessary point while ignoring the troubling rise of the far right.

This, of course, doesn't take away from the crimes and hatred coming from the right. But it doesn't excuse it either.

The United States is a actual democracy (*). We will have an election, and the democrats are going to have to convince voters who aren't outraged about Christmas songs to vote for them. Telling people that they are nazis is not a good way to win votes.

(* It is silly to argue about the electoral college, especially if you are from a country that doesn't have a written Constitution or a functioning legislative branch.)

1 Reply
4
Reply Mon 16 Sep, 2019 02:50 pm
@maxdancona,
The word Nazi has a very specific very real context. The use and abuse of the wording "Nazi" on political and online inflated hyperbolic discourse is disgusting!
0 Replies
2
Reply Mon 16 Sep, 2019 02:53 pm
@maxdancona,
Your default position is always that of a patronising fool. When a volte face doesn't work you change the subject and try to lecture on something you barely understand.
0 Replies