Forums: Brittany Pettibone, Martin Sellner, Lauren Southern
Email this Topic • Print this Page
Reply Wed 14 Mar, 2018 12:28 pm
The UK Border police have refused entry to three far-right activists on the ground that their presence in the country would 'not be conducive to the public good'. Brittany Pettibone, an American, and her Austrian boyfriend Martin Sellner were refused entry at Luton Airport on Friday. "They were detained for two days, and then deported" says the BBC*. Another activist, Lauren Southern, a Canadian, was was refused entry by the Border Force near Calais (France) as she tried to cross the English Channel to Britain.

Southern says she was questioned under the Schedule 7 of the Terrorism Act 2000, on her political views and her opinion on right-wing terrorism. She tells BBC Trending that she was refused entry on the grounds of her involvement "in the distribution of racist material in Luton".

In February, the Canadian activist displayed flyers saying "Allah is a gay god" outside a restaurant in the town centre.

* Technically this is inaccurate. To be 'deported' a person has to first be on UK soil, and anyone detained by immigration police is deemed to have not entered the country. The correct term is 'removed'. 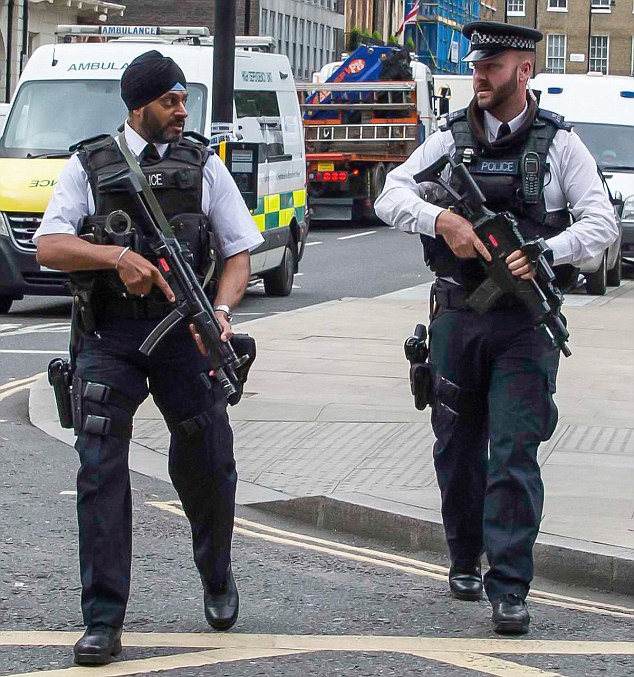 The UK can thank Islam for this.

We have had armed police at airports, rail stations, etc, for 40 years, even tanks at Heathrow, initially because of the Provisional IRA, funded by the American Noraid organisation. Do you ever do any factual research (scary idea, I know!) before posting anything?

That is their right. In my opinion, they are making the correct choice.

0 Replies
2
Reply Wed 14 Mar, 2018 05:15 pm
The Muslim Terrorist president in the US was far more popular than the current Far-right president.

I guess we feel the same way in the US.

You do know the cop on the left is a Sikh

Do you ever do any factual research (scary idea, I know!) before posting anything?

.killed more civilians in two hours on September 11th (2977) than in the 26 years of sectarian conflict in Northern Ireland (2236).

How many people in the UK have been killed by "Islams[sic]".

I was talking about the world. Should it matter where, it is inspired by Islam because it preaches hate and turns its results into an act of piety.
1 Reply
3
Reply Wed 14 Mar, 2018 08:11 pm
@coldjoint,
If you are going to go with the world... we will have to compare Christians and Hindus and Buddhists to Muslims.

You are just pushing one side of a religious war.

... it seems to me that you are the one preaching hate here.

. it seems to me that you are the one preaching hate here.

I am saying Islam is the most intolerant ideology/religion and plans to dominate the world. To tolerate intolerance is cowardice. It is not hate, it is a warning that freedom will disappear if something is not done.
1 Reply
2
Reply Wed 14 Mar, 2018 09:39 pm
@coldjoint,
Quote:

It is not hate, it is a warning that freedom will disappear if something is not done.

How will freedom disappear? What are you really afraid of?

It seems awfully silly to me.

How will freedom disappear?

You can't figure it out? You take it away from people.
0 Replies
3
Reply Wed 14 Mar, 2018 10:15 pm
No one has an absolute right to enter another country. Each country has the responsibility to keep their countryman safe, and if they decide certain foreign visitors are not welcome, they have every right to deny entry.

It really doesn't matter what anyone else thinks. I don't allow people I deem dangerous, boring or whatever to enter my home....that's my prerogative.
4 Replies
-3
Reply Wed 14 Mar, 2018 10:28 pm
@glitterbag,
Quote:

I know you share the glaring double standards with the UK. Other than that it is enforcing Sharia.
1 Reply
5
Reply Wed 14 Mar, 2018 10:33 pm
@coldjoint,
OMG, you are ridiculous. Send me your address and my family will come for a 9 month visit. Do you not see what a ridiculous person you are? You should be embarrassed, but you're not are you? Do you know why you're not embarrassed?
Of course you don't, thats why your posts are so delicious......you are the poster boy.
1 Reply
-3
Reply Wed 14 Mar, 2018 10:38 pm
@glitterbag,
Quote:

Of course you don't, thats why your posts are so delicious......you are the poster boy.

And yet, you wonder why Trump is president.