Results of his coherency test are awaited.

I am a humanist. 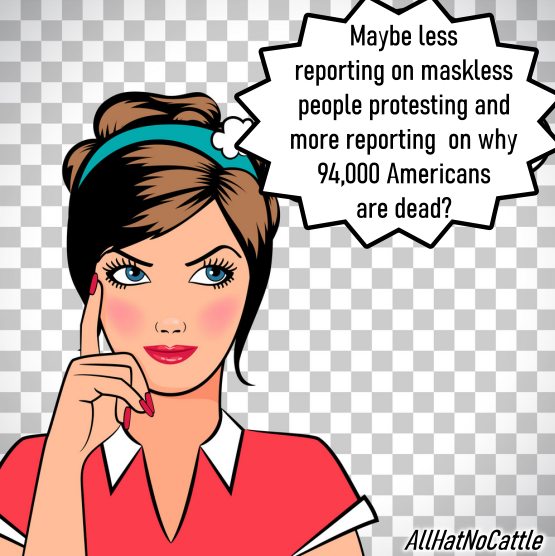 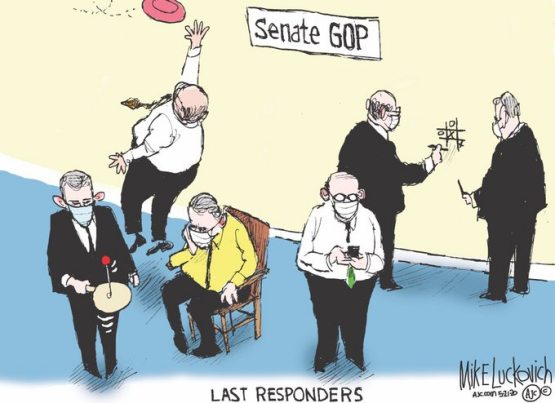 1 Reply
Below viewing threshold (view)
-6
Reply Thu 21 May, 2020 04:26 pm
@bobsal u1553115,
If that cartoon is saying they are not acting on that ridiculous bill the House just passed. They are not going to.
1 Reply
5
Reply Thu 21 May, 2020 04:41 pm
@coldjoint,
No, its about the 400+ bills that the House sent over that McConnell's sitting on because he doesn't want explain to the GOP constituency why the Senate voted against those bills.

I think the new stimulus bill will be passed by the Senate. McConnell does not want to loose his majority to 35,000,000 out of work voters who are loosing their benefits without it. I hope the GOP does vote it down. I'd love to see McConnell tarred and feathered, wouldn't you?
1 Reply
Below viewing threshold (view)
-8
Reply Thu 21 May, 2020 04:52 pm
@bobsal u1553115,
Quote:

I think the new stimulus bill will be passed by the Senate.

Not until the ridiculous crap in it is gone. If not Trump will veto it. He would rather lose the election than let Democrats get away with their country destroying policies.
1 Reply
3
Reply Thu 21 May, 2020 05:04 pm
Has anyone managed to change coldfall's or layman's mind yet? I'm sure that's just around the corner.

Paul Waldman mentions in passing a possibility we ought to be thinking about.

...In another corner you have Senate Majority Leader Mitch McConnell (R-Ky.), who remains adamantly opposed to any further rescue bills. His opposition is a little hard to explain, though he may have concluded that Trump will lose, so Republicans might as well hold the economy down so President Biden can suffer the consequences.

Two historical events speak to this possibility:
1) the day of Obama's inauguration, a group of senior conservatives met to plot a path back to power through opposition to any and all Obama policies and plans with the intention of creating a situation where Obama's presidency would fail. see here
2) McConnell admitted to the National Journal, “The single most important thing we want to achieve is for President Obama to be a one-term president.”

There is nothing to suggest that the modern GOP will operate any differently now or in the near future. If anything, they will proceed with even fewer moral constraints and with less concern for the well being of citizens. If Trump loses but Republicans hold the Senate, their response will be absolutely predictable - a repeat on steroids of what they did in Obama's first term (which worked well for them). Given the incredible problems a new president will face in January, they will see this as a very ripe opportunity to regain power - which is their most fundamental goal that trumps all other considerations of governance or national well being.

So we also need to consider how they are likely to behave over the next half year if it becomes clear that Trump is likely to lose. They will do all they can to disadvantage and kneecap a Biden administration before he even takes office.

Has anyone managed to change coldfall's or layman's mind yet? I'm sure that's just around the corner.

They will do all they can to disadvantage and kneecap a Biden administration before he even takes office.

He would rather lose the election

you are not right anywhere ever.

No you just not listening.

How do you listen to nothing? I'll wait.
1 Reply