Forums: Politics, Trump, American Politics
Email this Topic • Print this Page
2
Tue 19 Jan, 2021 08:13 pm
@oralloy,
I'm even more outraged by whichever educational institutions you attended. They clearly failed to teach you anything about the U.S. government functions or civics or most anything other than things related to guns.
1 Reply
-3
Tue 19 Jan, 2021 08:16 pm
@Sturgis,
You cannot point out any civics-related errors in my posts.

The ones that need to hear it won't believe it because they have an alternate reality they think is truth with every misbegotten atom of their being. He tells truth but that doesn't matter to them because it's not their "truth"

His own lies don’t bother him. He lies and then refuses to admit lying even when given proof of those lies.

More than five-hundred American authors and literary professionals have signed a letter calling on US publishers not to sign book deals with members of the Trump administration, saying "those who enabled, promulgated, and covered up crimes against the American people should not be enriched through the coffers of publishing".
NO BOOK DEALS FOR TRAITORS

Progressivism is bad. We'll all be better off if we remove progressives from society.
0 Replies
-4
Tue 19 Jan, 2021 08:20 pm
@Walter Hinteler,
Walter Hinteler wrote:

Fortunately, tomorrow at midday, as Joe Biden is sworn in, Trump's "nuclear biscuit" will become inactive.
The most frightening of his powers will be gone.

There was nothing frightening about Mr. Trump's control over the nukes. We could always rely on him to launch the nukes if the nation found itself in a nuclear war. What is frightening is the possibility that Mr. Biden will just surrender instead of fighting.

I hope Mr. Trump took steps to secretly give the Air Force direct control over the ICBMs so they can disregard Mr. Biden and fight a nuclear war on behalf of the nation on their own if they see fit.
0 Replies
-2
Tue 19 Jan, 2021 08:49 pm
@izzythepush,
izzythepush wrote:

This will be decided by lawyers, not you, your opinion is just that.

Appeals to authority are logical fallacies.

Plenty of people thought his words were inciting, you did not.

So are appeals to the crowd.
1 Reply
-1
Tue 19 Jan, 2021 08:52 pm
@hightor,
Translation: You claimed that Donald Trump directed a mob to storm the capitol, but cannot support it with a quotation. You lose the argument. If you disagree, just take five minutes and paste in the quotation.
2 Replies
-1
Tue 19 Jan, 2021 09:36 pm
@Brandon9000,
These kids don't back anything up, while demanding we have to.

They're only in their element while blowing hot air up each other's kyhber passes.
0 Replies
2
Tue 19 Jan, 2021 09:49 pm
@oralloy,
You should go back and read some more about what is meant when you say appeal to authority, because you've got it wrong.
1 Reply
-1
Tue 19 Jan, 2021 10:40 pm
@MontereyJack,
That is incorrect. An appeal to authority is when someone relies on the word of an authority instead of supporting their argument with facts and logic.
1 Reply
-2
Tue 19 Jan, 2021 11:13 pm
Just saw a meme in regards to the 25000 armed soldiers surrounding the Capitol building et al, stating that we don't need weapons to protect our own homes.

The fear of the masses is building momentum among the criminal deletes.
0 Replies
-1
Tue 19 Jan, 2021 11:28 pm
What is totally missing in this whole conversation, is that in a free-speech democratic republic, attempting to stymie or block the responses of half of the nation, is tantamount to treason, and totally against the constitution.

I'm not surprised at all that the usual dog-pile crew here, are totally in favor of this act of fascism.

You know who you are.

New polling data from Europe shows that large majorities among key U.S. allies hold a positive view of President-elect Joe Biden, suggesting a significant shift in European perceptions of the U.S. presidency as Trump’s term comes to a close.

But polling data also suggests some potentially troubling trends for transatlantic relations after four years of strained partnership, with indications that European publics believe Chinese power has grown over that of the United States under Trump.

Biden, who is set to be inaugurated as president Wednesday, is expected to “do the right thing regarding world affairs” by 79 percent of Germans, 72 percent of the French and 65 percent of Britons, according to polling conducted by the Pew Research Center late last year and published Tuesday. 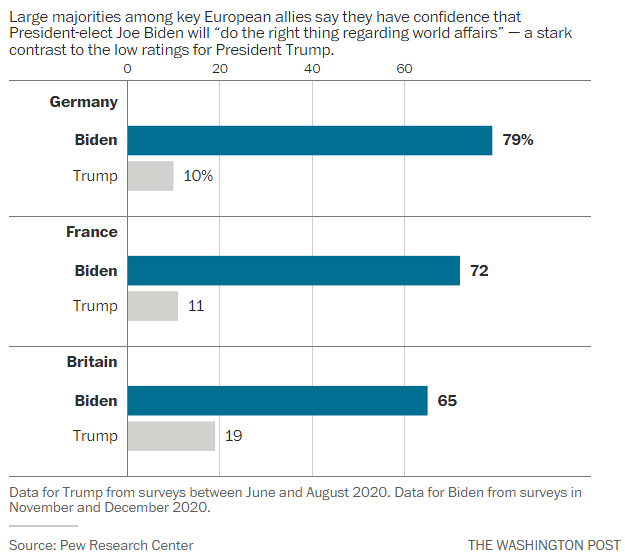 The high ratings for Biden in Western Europe’s largest countries form a stark contrast to those for his predecessor: Pew found that levels of confidence in Trump in Germany, France and Britain were just 10 percent, 11 percent and 19 percent respectively.

These views of Trump were recorded over the summer, and they may not reflect the departing president’s refusal to accept the results of the November election or this month’s violence at the U.S. Capitol. Trump’s domestic approval ratings have dropped during his final weeks in office, according to a Washington Post-ABC News poll.

Despite Trump’s ancestral history in Germany and Britain, as well as his avowed fondness for France, polls suggest that the Republican president has seen low popularity in all three countries throughout his time in office, along with a deepening skepticism of American power amid the coronavirus pandemic.

0 Replies
1
Tue 19 Jan, 2021 11:44 pm
While US politics has seen third parties in the past, they usually fail to attract the numbers required to play a significant role in elections.
However, Trump’s decision to form a new party, "Patriot Party", could be more successful.

Others pardoned, according to Reuters, were Elliott Broidy, a leading former fundraiser for Trump who has admitted illegally lobbying the US government to drop its inquiry into the Malaysia 1MDB corruption scandal and to deport an exiled Chinese billionaire.

Nothing so simplistic. go back and read it again. You're wrong.

I am completely correct in every respect.

Go back and read what again??
0 Replies