Sorry for the delay.

Here are the final standings. 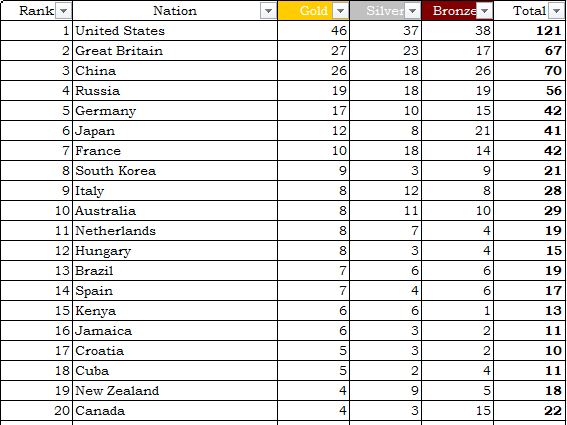 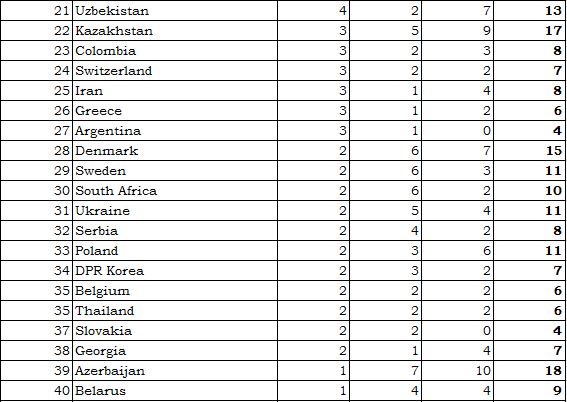 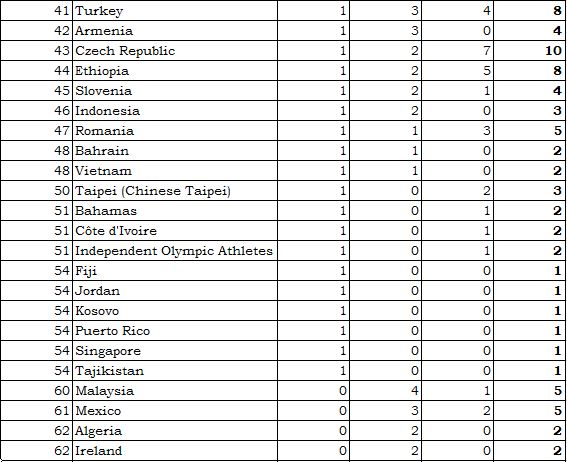 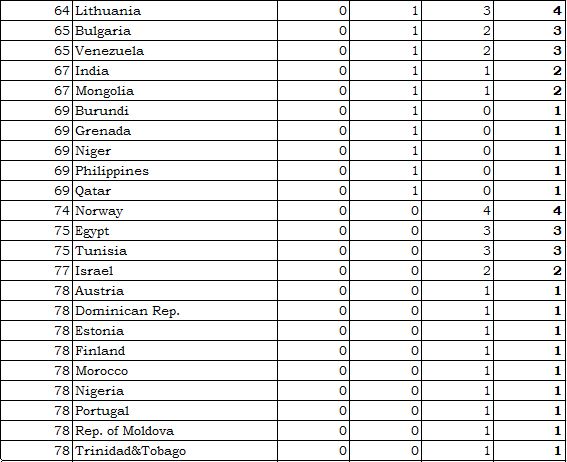 Was thinking of running a paralympics but before spending time getting my sheets updated to 2016 from 2012, was wondering of numbers...

Was thinking of running a paralympics but before spending time getting my sheets updated to 2016 from 2012, was wondering of numbers...


Nah, paralympics are a waaay different animal, a sort of griffin.
The most inspiring and some of the worst immaginable stories come out of those.

fbaezer, in my mind we tied for Gold, since there aren't tiebreakers in the real Olympics (except for overtime or shootouts in some team sports). It was pretty amazing and exciting that we tied with different country picks. Pretty cool, actually!

I actually like markr's idea of having weighted countries next time (where each country has a multiplier based on how they finished in the previous Olympics). I think that would make things extremely challenging. Perhaps we could run two different contests in parallel?

This would be the team with the least points:

0 Replies
1
Reply Mon 22 Aug, 2016 09:06 pm
Congrats to all of the winners, and thanks to Skin Rip for organizing and keeping score! My silence during the last two weeks here was not an indication of my lack of interest or enjoyment in the contest, which led me to become unusually interested in the (disappointing) performance of the Polish canoe and kayak teams.

I like the idea of running a "multiplier" contest in parallel with the current format for 2018. I saw a good format at https://en.zweeler.com/game/olympics/FantasyOlympics2016/home, which I would have played except that they don't allow entries from IP addresses in the US.

I like the idea of a contest that doesn't split teams. That just makes it harder to manage. There are a number of sites that list the results in somewhat real-time in a table format that can easily be imported into a Google spreadsheet that can be shared for all to view. The sites that I'm aware of don't split the teams by gender. I wrote a python program to do that for me, but it would be so easy to create a spreadsheet that is accessible by all. It almost wouldn't need to be managed.

I thought on behaving like a Mongolian coach, but no.

1 Reply
1
Reply Tue 23 Aug, 2016 03:40 pm
@markr,
Example of a contest where team costs are based on previous results and everybody has a budget (I still need to add budget cap checking). The site that tgordon92 referred to allowed a budget of $135 for a ten-country team with countries costing between $1 and $50.

Tab 2016 shows how this Olympics would have turned out without the Group A picks (select 13 non-split teams without a budget cap). As you can see, the folks who spent more scored higher. Doing this and enforcing a budget cap should make the race much tighter from top to bottom (assuming people consume the vast majority of their budgets). I would break ties based on total cost of the teams (less money spent on a team wins ties).

Hopefully this link doesn't get yanked. It's a link to a Google spreadsheet I created.