What did you all do when you were (or currently are) teenagers?

Forums: Advice, Life, Teenagers
Email this Topic • Print this Page
Reply Wed 2 Mar, 2016 04:40 pm
All of my sophomore friends have at least a job, doing early college classes, can drive, or have a car. (I even have some friends who already have their own car and don't even have their driver's license yet!) There is even a program at the local community college where high schoolers can earn an associates degree before they earn their high school diploma (I know that sounds crazy, but no. I'm not joking.) I feel like I'm behind everybody else because, well, I have none of that. I haven't really gotten the opportunity yet to learn to drive at the very least. I don't even plan on going to college after high school; I plan on doing something else. I live with my single mom who has a terminal illness :'( , so I guess you could say that I don't have your average family support.

So what did you all do/are doing? Does anyone have any quick&easy ideas about what I can do to feel more successful like my friends?
Type: Question • Score: 6 • Views: 1,627 • Replies: 9
View best answer, chosen by blackbear

3
Reply Wed 2 Mar, 2016 04:45 pm
@blackbear,
Don't compare yourself to others to feel good, just do good for your own sake. And having limited means is a challenge but not an insurmountable one. I had to go it alone from my teenage years and it was hard but I did well enough for myself.

You shouldn't write off your chance to go to college etc, there are possibly places you can get financial aid and you shouldn't automatically limit your dreams. You are gonna have to work harder for it than those to whom it is handed, but you don't have to settle for any less than you are able.
0 Replies
3
Reply Wed 2 Mar, 2016 05:10 pm
@blackbear,
I didn't get a license until I was 19.

People have differing opportunities, abilities, and resources. What can you do? First off, don't beat yourself up. You're dealing with a lot more than a lot of people ever do, and it's at a young age to boot.

And, college isn't for everyone. I don't know what you're doing but let's say you want to go to Art School. What to do? Well, practicing is helpful no matter what. Want to go out and work after high school? No shame in that; lots of people do.

Do what is right for you. The others are not in your skin. Only you are.
1 Reply
3
Reply Wed 2 Mar, 2016 09:04 pm
@blackbear,
I got my drivers license when I was 16. I got my first used car at around age 22. Sorry to hear about your mom's illness. Right now you are going through some rough times. If you have anyone else to help you with what you are going through like friends, family, church. This is a lot for a teenager to have to go through alone. You need some type of support. Whatever you do, don't compare yourself to others. They are not you and you are not them. Each and everyone of us are unique individuals with unique circumstances and situations. Your success and happiness has absolutely nothing to do with someone else's. You can have a different path in life from some of these people you know, and can still be just as happy and successful. Just don't get caught up into somebody else's definition of success and happiness. You have to first figure out what you want in life, not what other people may or may not be doing. That's what's going to determine your success and happiness.

Out of all the family and friends I grew up around, we all had different paths in our lives. Some went to college, some entered the military, some got married, some had children, some move to other cities and states, some never left the town we grew up in.
1 Reply
2
Reply Thu 3 Mar, 2016 09:54 am
@Real Music,
I got my first job when I was 14 washing dishes at Red Lobster. I made 1.55 per hour. Sometimes I think that was one of the happiest times of my life. Perhaps it was because it was my first experience with different types of people than from the farm life. If you are looking for weirdness the restaurant business has any kind of it your looking for. I remember a guy there everyone called dough boy-he would come to our softball games dressed like a cheerleader-which I thought was rib splitting funny-not realizing the real reason he did it. This was 1975 we are talking about. I remember that I had not the slightest idea why the 'older women' gave me so much attention-the professional waitress types. I had a girlfriend at the time and wasn't like I was raised in a cave but I never figured it until later in life that they thought I could make them look and feel younger. I started college at 17-I had just turned 17 and it was a huge mistake. I should have waited a year like everyone told me-however being a teenager means doing the opposite of what people think you should do. On Tuesday and Thursday mornings at 8:00am I had a lifesaving class at the indoor pool. A muscle bound fireplug in speedos taught the class and he took everything too seriously in my opinion. As a group we got to know him and he eased off a little especially when you had to walk through the snow still half loaded and awake in name only to get to the pool. Remember I had just turned 17- 3 weeks before and to coin a phrase I was 'in over my head'. Back then there was far too much drinking-the legal age was 18 however buying beer under 18 was never much of a problem. The whole campus seemed to revolve around this or that kegger and I got burnt out with it in one semester. College just bored my silly-if you were not into constant buzzing then it made you feel like an outsider. I always knew I would take over the business here at home so starting my third year I took a break. Once I got started and found out how much money could be made watching well paid others do the work I just never went back. I didn't cop out by saying 'one day I will go back' because I knew I never would. That was the day I turned 20 and my teenage years were over.
1 Reply
1
Reply Thu 3 Mar, 2016 11:12 am
@jespah,
jespah wrote:

There is even a program at the local community college where high schoolers can earn an associates degree before they earn their high school diploma (I know that sounds crazy, but no. I'm not joking.)


Does anyone have any quick&easy ideas about what I can do to feel more successful like my friends?

Me? I worked a dishwashing job for 4 and a half years (starting at the last year of middle school all through high school).

Does your school have ROTC? If you're not interested in immediately going to college after high school, perhaps you can enlist in the military for the college fund and go on from there? Just a thought.
0 Replies
1
Reply Thu 3 Mar, 2016 12:29 pm
@blackbear,
I was a nerd. Electronics hobby, goofy looking, and a loner. My father made me drive at 16 so I could help out with his deliveries driving a large van. I had other nerds for friends.
0 Replies
4
Reply Thu 3 Mar, 2016 03:35 pm
Helped my brother with his paper round when I was about 9.

Started my own paper round at twelve.

At fourteen I worked on Saturdays from 7am to 5pm at a nearby Butcher's shop. Spent the mornings delivering meat orders to big, posh houses on my butcher's bike. Spent the afternoons cleaning out the big storage fridge and freezer, then washing and buffing the shop windows.
Butcher's bike...

I then started delivering an evening paper (Evening Echo) and did various paid odd jobs for my immediate neighbours (gardening, window cleaning etc) and just about managed to squeeze in the odd bit of football or homework for a few years. By then I must have been working around 25 - 30 hours a week, all in all.


Saved up and bought a Mini Cooper when I was almost seventeen, and drove it unofficially (illegaly) until I passed my test about three months later.
Two weeks after my driving test, the subframe gave way on the mini and I had to save for another three months to get it fixed.
Apart from the roof leaking, the windscreen wipers not working and the fact that the engine temporarily lost power when I went through even the most shallow puddle, it was the best car I ever owned.


Not my car, but a spitting image of it. Same colour exactly..... 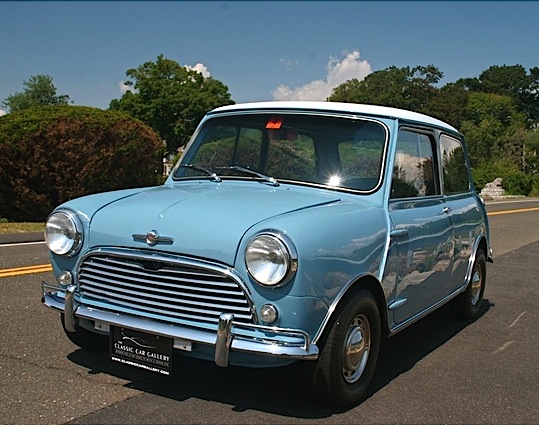 0 Replies
1
Reply Thu 3 Mar, 2016 07:41 pm
@spooky24,
My first job was at age 16 at Hardees, which is a fast food burger joint. I was making the minimum wage which was $3.35 per hour. I didn't like the job itself, but I did have some fun with the people I worked around. Just having my own income was a big deal to me. I didn't apply myself at school as much as I should have. Like a lot of teenagers, I wanted to have fun more than going to school. I ended up graduating as an average student. I'm now in my late 40s. I own my own house. I have a good paying job. Family is and has always been important to me. My siblings, mom, dad, grandparents, cousins, aunts, and uncles.
0 Replies

We haven't talked in over two months... - Discussion by notoriousbigeek
Leaving the man you love? - Question by lara010204
Did I hurt her feelings? I was just being honest. - Question by fifteenseconds
My boyfriend doesn't want to have an active sex life with me - Question by 37kf80
Should I contact my birth father? - Question by HahnKristen
Depression after night together - Question by Missing-my-lover
What's wrong with me? ...two years later.. - Question by MelodyCrystal
Do most women have a sl*t/ sleeping around phase? - Question by purpleapple100745
Would she do it again? - Question by yabberdabberdoo
What should I do about this new guy liking all my girlfriend's Facebook posts? - Question by Tropic34
Girlfriend thinks I am loosing interest in her, but I am not. What should I do or say? - Question by gorff
Copyright © 2022 MadLab, LLC :: Terms of Service :: Privacy Policy :: Page generated in 0.03 seconds on 08/16/2022 at 06:28:54
▲ ▼