Forums: Politics, American Politics, Ted Cruz, Cruz, American Election 2016
Email this Topic • Print this Page
2
Reply Thu 21 Apr, 2016 06:36 am
@snood,
You certainly pegged that one out correctly. Like when people put Cruz up as a rational alternative to Trump. National Enquirer claims photo is proof that Rafael B. Cruz was standing alongside JFK assassin

Lee Harvey Oswald, front left, standing next to man never identified by the Warren Commission, center in white shirt, handing out leaflets for the Fair Play for Cuba Committee taken outside the International Trade Mart in New Orleans on Aug.16, 1963. The National Enquirer is now saying that they have determined through photo analysis that the man is Rafael B. Cruz, father of GOP presidential candidate Ted Cruz. Johann Rush/WSDU-TV

The National Enquirer has published what it says is conclusive evidence that Ted Cruz’s father, Rafael B. Cruz, is the man photographed next to JFK assassin Lee Harvey Oswald distributing pro-Castro leaflets in 1963 in New Orleans.

The Cruz presidential campaign fired back unequivocally. “This is another garbage story in a tabloid full of garbage,” communications director Alice Stewart told McClatchy. “The story is false; that is not Rafael in the picture.”

The explosive suggestion that Cruz’s father would have had any affiliation with Oswald is not corroborated in any other way. Cuban-born Rafael Cruz is now a fervent anti-communist, but there was a time he supported then-rebel leader Fidel Castro. His son, Sen. Ted Cruz, R-Texas, frequently relates his father’s arrest and torture by government officials and subsequent escape to the United States.

The elder Cruz ended up at the University of Texas at Austin and still supported Castro, who led the revolution that overthrew the Batista regime in 1959. Castro formally declared himself Marxist in 1961.
ADVERTISING

“The U.S. government was duped. The American people were duped. I was duped,” Rafael Cruz wrote in his book, “A Time for Action,” released in January. “When people ask me why I supported Castro in over-throwing the Cuban government, I readily admit that I didn’t realize he was a communist.”

There are photos of Rafael Cruz participating in a pro-Castro rally in 1959 and an article in the student newspaper where he describes his support for Castro. And one report questions the extent of the elder Cruz’s connections to Castro before fleeing Cuba.

The photos of Oswald distributing pro-Castro literature are from August 1963, just a few months before the JFK assassination in Dallas, which the Warren Commission Report on the Assassination of President John F. Kennedy said was carried out by Oswald.

The tabloid hired photo experts who compared the elder Cruz’s photos from the late 1950s and early 1960s with the ones released by the Warren Commission. The man in the white shirt next to Oswald was never identified by the commission, and the Enquirer is now saying it was Cruz and blasted on its May 2 cover that “Ted Cruz Father Now Linked to JFK Assassination!”

The feature that is most interesting and similar is his insincere smile. Carole Lieberman, expert witness

The Enquirer has a testimonial from Mitch Goldstone, president and CEO of ScanMyPhotos, a California-based digitizing photo service, who told the tabloid, “There’s more similarity than dissimilarity. . . . it looks to be the same person and I can say as much with a high degree of confidence.”

And Carole Lieberman, a University of California - Los Angeles forensic psychiatrist and expert witness based in Beverly Hills, California, compared the photos and told the Enquirer “they seem to match.” Neither Goldstone nor Lieberman returned phone calls from McClatchy.

But Gus Russo, an author and journalist who has written extensively about the JFK assassination and Oswald, is dubious. Russo told McClatchy in an interview that Oswald, who was living in New Orleans in 1963, was not connected to the Cuban community there and would not have had a Cuban supporter helping him. “He was the ultimate loner,” said Russo. Another man seen in the video handing out leaflets had been hired by Oswald to do so at an unemployment office, according to the Warren Commission. Rafael Cruz also lived in New Orleans, but it was later in the 1960s.

As for the photo “evidence,” Russo said, “It’s very subjective. It’s not proof. It’s just an opinion. To charge something this big, you’d better have better proof than that ‘it looks like him.’”

The FBI would not comment about its photo recognition and aging identification techniques but referred McClatchy to a web page about its Investigative and Prosecutive Graphic Unit.

The Enquirer has focused on Ted Cruz during the presidential campaign with sensational stories about his alleged mistresses and supposed connection to the DC Madam. The tabloid, which has endorsed presidential frontrunner Donald Trump, said in a “declaration” published on a page of the story that the paper had been approached by someone it does not identify during the New York primary with the photos. “In this instance, we believe American voters have a right to know the truth about the Cruz family,” it says.

Read more here: http://www.miamiherald.com/news/politics-government/article73449297.html#storylink=cpy
1 Reply
2
Reply Sun 24 Apr, 2016 12:04 pm
@bobsal u1553115,
Interesting, but still questionable. Do we rely on assumptions?
1 Reply
1
Reply Sun 24 Apr, 2016 10:03 pm
@cicerone imposter,
A site dedicated to the Kennedy Assassination said it wasn't true but offered no evidence and couldn't identify the man as anyone else and admitted they couldn't prove it wasn't Cruz, either.

Because the Miami Herald is wiring this I tend to think it gives it some amount of credence.

In response to several queries about the Rafael Cruz (father of Ted) JFK conspiracy theory, I delved into the record with the help of a faithful reader. Here’s what is known:
Oswald in New Orleans

Lee Oswald in New Orleans: Who is the man in the white shirt near Oswald’s left elbow? 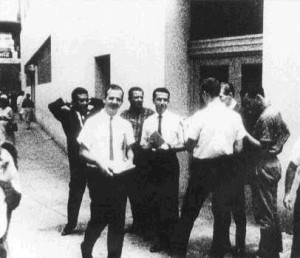 about the photo which conspiracy theorist Wayne Madsen claims captures the father of the Republican presidential candidates. Rafael Cruz lived in New Orleans in 1963.

There is no evidence the man is Rafael Cruz. Madsen seems to be believe that a photograph of Ted Cruz taken in the 1950s and the assertions of one anonymous source constitute “evidence.”

The Japanese man, Junichi Ehara, was located and he confirmed he took a leaflet from Oswald. He was shown the photo and said he could not identify the man next to Oswald.

In February 1967, FBI official W. A. Branigan told deputy FBI director William Sullivan that the mystery man remained unidentified after an “ex[h]austive investigation.” In the context of FBI director J. Edgar Hoover’s query about gaps in the investigation, this person was singled out as an individual associated with Oswald who could not be identified.

The failure to investigate

By February 1967, New Orleans District Attorney Jim Garrison was investigating an alleged JFK conspiracy in New Orleans and the FBI and the CIA began to watch him closely.

In April 1967 CIA director Richard Helms sent out a worldwide memo seeking to identify critics of the Warren Commission as irrational and anti-American and claiming that the Agency had fully cooperated with the Commission. Last October, Politico reported that CIA historian David Robarge now acknowledges that the CIA did not cooperate with the Commission but rather foisted a supposedly “benign coverup” on JFK investigators.

In September 1967 the CIA’s Counterintelligence Staff, headed by James Angleton, set up a “Garrison Group” to monitor the New Orleans investigation. Angleton’s people never identified Oswald’s collaborator in handing out pro-Castro pamphlets either.

The Garrison Group was more concerned about preventing Garrison from identifying Cubans who had worked with the agency than it was about investigating Oswald’s Cuban contacts. One possible explanation: George Joannides, undercover case officer for the CIA-funded Cuban Student Directorate in Miami in 1963, maintained a residence in New Orleans, according to sworn testimony of U.S. Attorney Ron Machen.

Fiorina has met with members of the Cruz campaign and has given them financial disclosures and other documentation. However, “no offers” have yet been made.

By Monday night, she was a viral sensation after viewers of the Maury Povich show decided she was the female doppelganger of Republican presidential candidate Ted Cruz.

Hayes went on the show after her fiance, 25-year-old Freddie Green, accused her of cheating on him. All was resolved in typical Maury fashion when she passed a lie detector test and DNA results showed her 3-month-old son was Green’s.

Since the appearance, numerous websites have printed side-by-side photos showing Hayes next to Cruz.

Amazingly, Hayes had never heard of Cruz before the resemblance was pointed out to her and she still knows little about him.

“I don’t know his positions and I’ve never seen him, so I don’t know if he’s done a good enough job to be reelected,” she told The Huffington Post.

When we pointed out that Cruz isn’t actually president, just a candidate, she said, “Well, yeah, I don’t know anything about him.”

Hayes has had such a big impact that Povich did a special Facebook interview with her.

For those keeping score, that’s about $1,666.66 per each minute of carnal screen time.

Kulich figures that since it’s doubtful Cruz is going to film a sex tape — at least while he’s still a candidate for president — this is the next best thing.

Hayes and Green have agreed to make the film.

She has made sex tapes privately, but this will be the first time that millions of people potentially will be watching.

“I’m fine with it because everything is going to support my family,” she said. “I want to get my son whatever he wants.”

“It’s kind of exciting and shocking to know she’s famous — she’s more famous than Madonna!” he said. “I’m with a star.”