Was only giving you a hard time OmSigDAVID.
We were neighbors for thirty five years.

"Alright...I just may better than you know."

anonymously99stwin wrote: Was only giving you a hard time OmSigDAVID.
We were neighbors for thirty five years.

anonymously99stwin wrote: Was only giving you a hard time OmSigDAVID.
We were neighbors for thirty five years.

Its a straightforward question:
are you Murray Zakin ????????

I'm stuck. I'll never get out.

You know. That thing called a mental situation.

So that's how you folks plan on killing me.

Anonymously said: As I've mentioned before. I don't care any more. about anything.
I'm stuck. I'll never get out.
Not because I don't want to but because I can't.
You know. That thing called a mental situation.
Because I honestly don't care

If you don't care about anything, BE GLAD that you're free from worrying..

We're all brainwashed by parents and teachers from an early age that we must "fit in" to the world, but as soon as i began thinking for myself in my early teens, I decided to REJECT the world and have been fine ever since.. Romeo Fabulini. Rejection grows on a person who has dealt with it their entire life. That feeling of not caring.
0 Replies
-3
Reply Tue 14 Jan, 2014 09:11 am
Quote:

Anonymously said: @RF- Rejection grows on a person who has dealt with it their entire life. That feeling of not caring

Not sure I know what you mean mate. All I know is that I rejected the world in my teens and have been cruising merrily along ever since..

Who did Jesus say was the greatest man ever to be born?
Some famous King maybe? Or one of the ancient prophets? A wise philosopher or mystic perhaps?
Nah!
Jesus's cousin John was a young world-rejecter living rough in the middle of nowhere eating wild food and dressed in near-rags, sometimes going in town to yell insults at the snooty priests and corrupt rulers.
Jesus's verdict on him? -
"John is the greatest man ever to be born" (Matt 11:11)

John vs Herod and Salome-

I loved the 194Os and 195Os; (did not like Roosevelt or Truman much).
I like Ike. Thay felt different; better than now. I did not like the 196Os.
I wish I coud go back in time. That 'd be fun; profitable.

I like Ike. He had a role in bringing in the 1960s. Here is a picture of the federal troops Einenhower called in to forcefully desegregate schools in Little Rock, Arkansas. 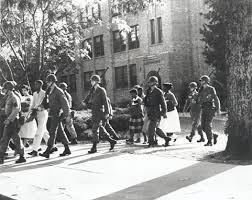 My big problem with Ike is his goofy nuclear weapons policies.

At the time, Ike was apparently content with voicing his idiocy to his immediate superior, as he didn't volunteer his idiocy to anyone else.


But later, when Ike was president, all he did was continually impede the development of larger nuclear weapons.

He also imposed a silly policy that war planners could not target Soviet sites with a blast larger than 2 megatons unless they could first justify why the greater yield was needed.

The US would have a much more impressive arsenal today if not for Ike's silly meddling.

A good cry on the train - Discussion by Joe Nation
She still loves me but is marrying someone else.:'( - Question by bernsky
My husband doesn't want to get rid of his woman friend - Discussion by sanderml
Wife not trusting, and wants all my passwords - Question by Pvtp
Why is he on this site? Am i over reacting? - Question by Mwonders16
I want to run away. I can't do this anymore. Help? - Question by unknownpersonuser
Please help, should I call CPS?? - Question by butterflyring
stuck in a tough position with this girl and no idea what to do - Question by mhen1111
Should I date a homeless girl? - Question by singlesucks13
I Don't Know What To Do or Think Anymore - Question by RunningInPlace
First time sex, some really quick questions - Question by van1van
Copyright © 2021 MadLab, LLC :: Terms of Service :: Privacy Policy :: Page generated in 0.03 seconds on 12/06/2021 at 07:08:45
▲ ▼