Izzy said: Kim Jong Un is too busy enjoying the high life to do anything so stupid.

Perhaps, perhaps not, but there are a lot of wackjob tyrants out there and we can't take chances..

Alaska would be first in the firing line against incoming missiles from N.Korea, hence the Alaskan SAM shield (blue line)- 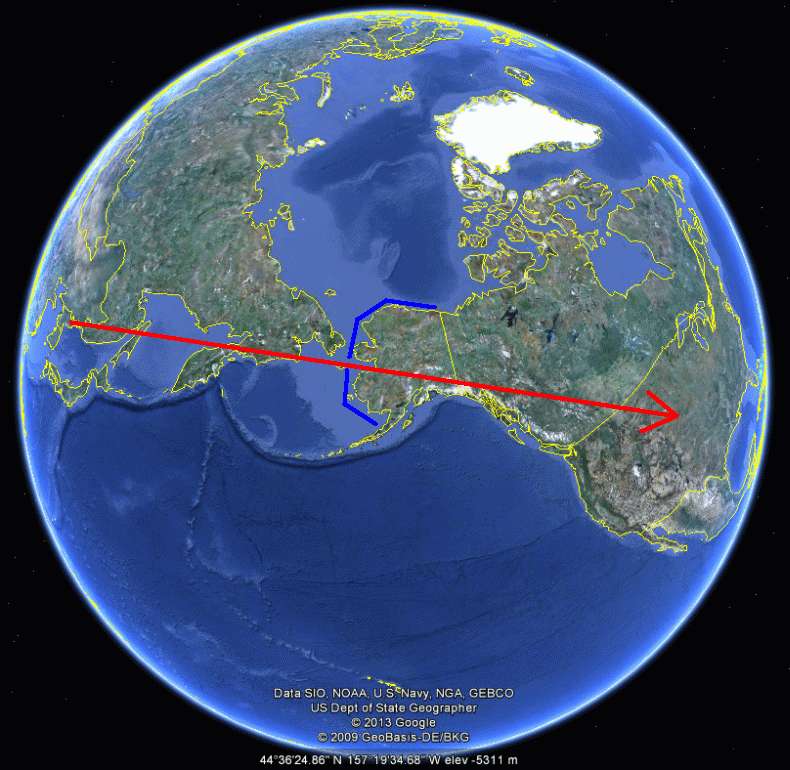 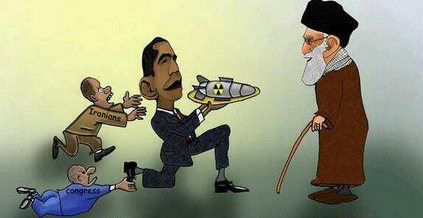 0 Replies
0
Reply Mon 2 Dec, 2013 11:45 pm
Iran apart, let's not forget that Pakistan (a muslim country and Bin Ladens old hangout) has had nuke missiles for years, but at the moment their regime is friendly towards the West because our politicians have been bribing them with truckloads of "foreign aid" cash to keep them sweet.
But friendly regimes have a habit of changing for unfriendly regimes further down the road, and when that happens Pakistans nukes might fall into the hands of terror groups..

A truck carrying radioactive material has been stolen in Mexico, the UN's nuclear watchdog says.

The radiotherapy machine, used for treating cancers, was being taken from a hospital to a waste storage centre.

It was stolen near the capital, Mexico City.

No amount of sanctions on Iran could have stopped this from happening. The perfect ingredients for a dirty bomb, and Mexico is a lot closer to America than Iran.
1 Reply
1
Reply Wed 4 Dec, 2013 10:31 am
@izzythepush,
That was stolen in Mexico; the same kind of radioactive material can be stolen in the US. It's up to the intelligence agencies and the police to ensure that none are used to make a dirty bomb; it's their job.

For the one stolen in Mexico, all the border patrols will be on higher alert.

That's all that can be done - in the real world.


Exactly, while Romeo is making paper tigers what could be a real threat shows itself.
1 Reply
1
Reply Wed 4 Dec, 2013 05:44 pm
@izzythepush,
That's not the only issue; it takes some knowledge to build a "dirt bomb."
They make it sound like almost anybody with radioactive material can build one.

Their "fear" is based on imagination that isn't realistic - in almost every way.

Recent news of container found. It means the person who took it out of the container is now exposed to radiation.

Juan Eibenschutz says radioactivity has been detected about 1 kilometer (a half mile) from where the stolen truck and empty container were found in the state of Mexico.

He says authorities have cordoned off the area.

0 Replies
0
Reply Wed 4 Dec, 2013 11:46 pm
There are a zillion ways terrorists could attack America and the West; subs carrying suitcase-nuke terror squads are just one way.
There's also germ and chemical attacks and even ordinary explosives could be used like at the Boston marathon, because ordinary explosives are very easy to get and smuggle around, for example a huge truck bomb in the heart of Washington, London, Paris, Rome, Denver, San Francisco etc.

As i've said before, America and the West could greatly reduce the risk of such attacks by firstly withdrawing our troops from the mid-east, and secondly by stopping supporting Israel with cash and weapons.

This Koran verse gives a clue- "And do not kill any one whom Allah has forbidden, except for a just cause" (Koran 17.33]

See, they feel they have a "just cause" because our politicians invaded the mid-east and are also supporting Israel.
And like i've also said before, Israel is bristling with nuke missiles and is well able to look after herself, she doesn't need the West..

0 Replies
2
Reply Thu 5 Dec, 2013 02:29 am
@coldjoint,
I would like you to research some of the things many prominent rabbis' say. If you would like, I could dig up just as many disgusting statements as the radical Muslims do. Many of them see all Gentiles as inferior to the Jews. You can find just as many heinous passages in the Bible as you can in the Koran. Just look in the Book of Deuteronomy.
Seriously, please answer this question: Do you watch Fox News? Seriously, answer it yes or no.
1 Reply
2
Reply Thu 5 Dec, 2013 02:37 am
@Romeo Fabulini,
The most dangerous threat in the middle east is nuclear Israel. They tried to hide the fact that they had a nuclear program from the rest of the world. I believe the whistle blower who leaked to the world how many nukes Israel has may still be rotting away in an Israeli prison because of it. Did you know Israel wanted to nuke Iraq when Saddam was in power and the US had to talk them out of it. How disastrous would that have been? You do realize the word "terrorist" is relative. To many the Israelis are the terrorists and the Palestinians are the freedom fighters.
Now, I'll ask you the same question. Do you watch Fox News regularly?
2 Replies
1
Reply Thu 5 Dec, 2013 02:41 am
@Jpsy,
He's out, but he can't leave Israel or do a lot of things the rest of us take for granted.

The most dangerous threat in the middle east is nuclear Israel.

A threat to who? They are certainly not a threat to anyone civilized.

They tried to hide the fact that they had a nuclear program from the rest of the world.

Well, what's wrong with that? It was their private business to begin with.

I believe the whistle blower who leaked to the world how many nukes Israel has may still be rotting away in an Israeli prison because of it.

He did commit treason after all.

Did you know Israel wanted to nuke Iraq when Saddam was in power and the US had to talk them out of it.

They wanted no such thing. Enough with the anti-Semitism.

You do realize the word "terrorist" is relative.

To many the Israelis are the terrorists and the Palestinians are the freedom fighters.

Jpsy said: The most dangerous threat in the middle east is nuclear Israel

Only if the muslims use nukes (or biological or chemical weapons) against them first, then Israel will wipe out every muslim city in the entire mideast, they call it 'The Samson Option'.
In 2003, an Israeli military historian, Martin van Creveld, was quoted as saying-
"We possess several hundred atomic warheads and rockets and can launch them at targets in all directions....Let me quote General Moshe Dayan: 'Israel must be like a mad dog, too dangerous to bother....Our armed forces are not the thirtieth strongest in the world, but rather the second or third. We have the capability to take the world down with us. And I can assure you that that will happen before Israel goes under"
http://en.wikipedia.org/wiki/Samson_Option

I would like you to research some of the things many prominent rabbis' say. If you would like, I could dig up just as many disgusting statements as the radical Muslims do. Many of them see all Gentiles as inferior to the Jews. You can find just as many heinous passages in the Bible as you can in the Koran. Just look in the Book of Deuteronomy.
Seriously, please answer this question: Do you watch Fox News? Seriously, answer it yes or no.

First, thank you for a civil reply.

Feeling superior to someone or some people does not mean you kill them for the Jews. It does not mean you will not follow your host countries laws. And besides defending Israel where has Israel been involved in what you consider terror?

Now to the Bible passages. They are history to Jews and Christians. Unlike the Koran still memorized by young Islamists. It is a relevant book today, the Bible is not, and in fact it is used today by apologists to defend Islam.

Their first try is a passage from Deuteronomy that might appear to command present-day believers to take a city by force and slaughter the inhabitants on order from God:

“When you approach a city to fight against it, you shall offer it terms of peace. If it agrees to make peace with you and opens to you, then all the people who are found in it shall become your forced labor and shall serve you. However, if it does not make peace with you, but makes war against you, then you shall besiege it. When the LORD your God gives it into your hand, you shall strike all the men in it with the edge of the sword. Only the women and the children and the animals and all that is in the city, all its spoil, you shall take as booty for yourself; and you shall use the spoil of your enemies which the LORD your God has given you. Only in the cities of these peoples that the LORD your God is giving you as an inheritance, you shall not leave alive anything that breathes” (Deuteronomy 20:10-17 - As quoted by The American Muslim

Except for the part about sparing women and children, this sounds similar to a verse from the Qur’an:

And when We would destroy a township We send commandment to its folk who live at ease, and afterward they commit abomination therein, and so the Word (of doom) hath effect for it, and we annihilate it with complete annihilation. (Quran 17:16)

But, in fact, the Biblical passage is not an open-ended command to "kill anything that breathes", but instead, a story of history bound within the text. Having trouble seeing this? That’s because the author of The American Muslim piece cleverly left out this part of the passage:

These are the discrete targets referred to in the last part of the quoted text. The rest of the passage is bound by context as well, given to "Israel" (verse 3) and those "brought out of Egypt" (verse 1). These would be specific instructions to the ancient Israelites, which is why today's Christians and Jews do not treat these verses as present-day imperatives.

Defeat that argument. And notice the deceit used by the apologists. By the book.

Qur'an 4:142 "Surely the hypocrites strive to deceive Allah. He shall retaliate by deceiving them."

Notice Allah can't do this by himself. In fact He did zero until Mohammed invented him. And the commands of eternal war is still being followed.

As far as Fox News, I watch it, and NBC to get both sides and rely heavily on the internet because both ignore so many stories. In fact CNN was just caught taking money not to publish anything that made the Arab world look bad.
0 Replies
0
Reply Thu 5 Dec, 2013 12:07 pm
Quote:

Rabel said: So you agree with Jpsy. Israel is a mad nation with nuclear weapons dangerous to its so called allies. U S S Liberty

If Israel nukes every muslim city in the mideast, the only danger to other nations is if the wind blows the fallout in their direction..

I wonder where Fabulous Lover lives

You don't pay attention do you? And the Liberty was a mistake. The Fogel family was not.
0 Replies